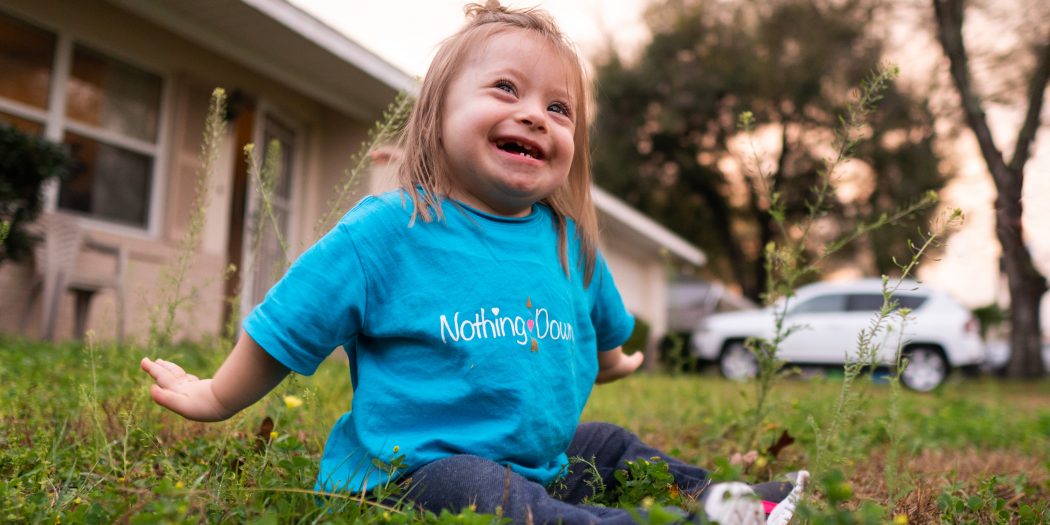 Riley Belcher flashes her big smile. She has a lot to be happy about after being chosen to represent the nonprofit Nothing Down. (Photos by Justin Bright/WUFT News)

Her parents say she shines brighter than the sun.

Riley Belcher, a 2-year-old from Belleview with a radiant smile, was selected to be an ambassador for the Down syndrome awareness nonprofit Nothing Down. She and other ambassadors will share their story to show the positive ways in which people with Down syndrome touch the lives of those around them.

Riley was diagnosed with Down syndrome at birth. “I’m sorry,” was the first thing her mother Jennifer heard from the doctor when Riley was born.

Down syndrome is a genetic disorder that causes moderate intellectual disability and physical features such as a small head, low muscle tone and an upward slant to the eyes. People with Down syndrome live, on average, 50 to 60 years in the United States, according to University of Florida pediatrics professor Sonja Rasmussen.

Nobody told Riley about her possible shortcomings. She has begun to take her first steps and attends therapy sessions five days a week. When she’s at home, she sometimes gets caught stealing goldfish from her 7-year-old sister, Olivia.

“She insists on giving everyone a high-five when we’re at Publix,” said her father, Colin, who left his job at Sears in November to commit more time to his daughters. “She’s very outgoing. Nobody is a stranger to Riley.”

Riley was one of 33 ambassadors chosen from more than 500 applicants. The applicants were selected based on their passion for advocacy and commitment to changing how people view Down syndrome, said Nothing Down co-founder Shannon Daughtry.

“They are often seen as a group and not as individuals with unique personalities,” Daughtry said. “Just like you and me, they have their own likes, dislikes and individual dreams.”

Nothing Down has initiated other programs like Obstetrician Outreach and Blessing Baskets of Hope. These focus on training medical professionals to give accurate and supportive Down syndrome diagnoses and to send gift packages to expecting parents, respectively.

Neither of Riley’s parents knew much about Down syndrome before their youngest daughter was born. They were warned about slower development, a weak immune system and the possibility of heart surgery due to her disabilities.

Since then, Riley was treated for pneumonia at UF Health Shands Hospital and had her tonsils and adenoids removed to combat obstructive sleep apnea. She has fully recovered.

Last year, Riley participated in the Buddy Walk, an event hosted by the Down Syndrome Association of Central Florida to raise funds for programs that help people with Down syndrome and their families. Riley and her team of about 40 walkers, “Riley’s Rockstars,” raised $2,695. This year, they hope to raise $3,000.

“We were amazed at the amount of support we got,” Colin Belcher said. “Friends that we hadn’t spoken to in years donated or came to the Buddy Walk. [Riley] brought people closer.”

Riley’s impact on others encouraged Jennifer Belcher to overcome her uneasiness for public speaking. Now, she readily talks to large groups of new and expecting parents of children with Down syndrome to give them courage and reassurance.

“There is better awareness in the general public and among physicians about Down syndrome and what they can do,” Rasmussen said.  “As we know, a person with Down syndrome can live independently and have a job. Sixty years ago, they would have been told to put their child in an institution.”

Riley continues to inspire by example. Her parents know firsthand the effect her infectious giggle and enthusiasm for life can have.

“When she smiles at you, you can’t help but to smile back,” Jennifer said.