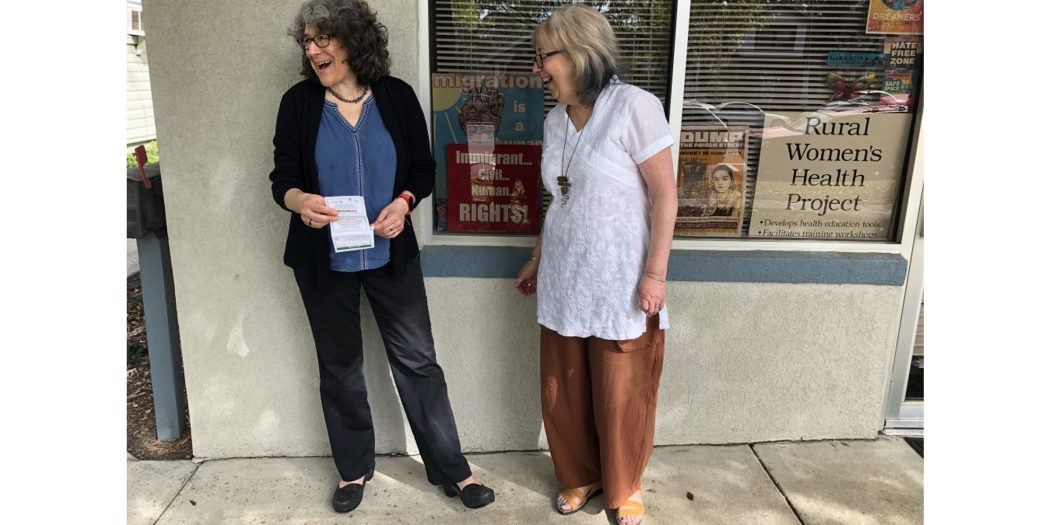 Robin Lewy, left, and Fran Ricardo helped develop the Conexiones pamphlet that seeks to connect non-English speakers with help when they need it. (Xoe Miller/WUFT News)

Sometimes, the biggest obstacle for domestic violence victims isn’t seeking help, but trying to figure out how to ask.

Three organizations from the Gainesville community teamed up to help those who don’t speak English by giving them access to resources — particularly a pamphlet called “Conexiones.” Translated to the word “connections,” it’s a two-sided document with 12 sections that lists resources in Spanish. It provides the names, times and phone numbers of places in the Gainesville area that offer medical assistance or education assistance for minors.

Here is its genesis: On Easter Sunday 2018 in southwest Gainesville, police responded to a call from a woman who said she had been involved in a domestic violence incident. The man arrested, Benjamin Perez-Bravo, 22, was accused of physically assaulting the woman. The situation, immigrant advocates said, turned from bad to worse when the police questioned her immigration status.

The woman and seven witnesses living where the incident took place were from Guatemala and didn’t speak English.

The next day, a Gainesville Police Department spokesman told the Gainesville Sun his department would report those involved to the U.S. Immigration and Customs Enforcement, though the city later backtracked on that statement. The story also included the woman’s address.

Out of fear, the woman and witnesses fled the Gainesville area and have not returned since.

With prosecutors in the following weeks unable to locate the victim, they dropped the charges against Perez-Bravo, and he was released.

He, too, has since disappeared.

The Conexiones pamphlet lists specific phone numbers to resources for those who speak Spanish.

Robin Lewy, 58, the founder of Rural Women’s Health Project and one of the three organizations who created the pamphlet, said putting it together wasn’t difficult.

In fact, creating the idea and finding the resources took the least amount of time, she said.

The trouble came when interacting with law enforcement.

In her 27 years of experience, Lewy said instances like the one that happened in April, unfortunately, occur too often.

Lewy said the case wasn’t handled with proper care — a fact Mayor Lauren Poe quickly acknowledged last year and again this week — but instead of complaining, she wanted to offer resources.

The pamphlet was initially accepted by GPD, according to Lewy, and her organization was also going to give training to officers. Chief of Police Tony Jones said at a Gainesville City Commission meeting Thursday he doesn’t allow any third-party organizations to offer training to his officers.

Lewy said she only wanted to provide training to officers to guide them through scenarios when they encounter people who don’t speak English.

“The goal is to serve Spanish-speakers and know their needs will be met,” she said. “Good policing is culturally-appropriate policing.”

The department and city commissioners on Thursday agreed to work with stakeholders like Lewy to further revise GPD’s policy surrounding foreign nationals and non-English speakers.

Stuart is one of three people who speak fluent Spanish at Peaceful Paths, and she helped translate for the Guatemalan woman in April 2018. She said Spanish wasn’t even the woman’s native language. Rather, it was one called Chuukese, an indigenous language.

Stuart said pamphlets are created and distributed all the time. But this one is different.

“It’s important to provide information in Spanish,” Stuart said, “especially to a community that doesn’t access resources simply because there is a language barrier.”

Veronica Robleto, an immigrant rights paralegal at Florida Legal Services, said language barriers are a big issue in many of the situations she sees. She said the project’s importance is making the information known to people who need it.

The pamphlet was put together quickly.

Still, after going back and forth with law enforcement for months about the language of the document, Robleto said she and the other two organizations she worked with decided to release the pamphlet on their own.

Anyone interested in copies of the pamphlet can contact Robin Lewy, the director of programming at the Rural Women’s Health Project, by email at rlewy@rwhp.org or phone at 352-372-1095. The office is located at 1108 SW 2nd Ave.

Xoe is a reporter for WUFT News who can be reached by calling 352-392-6397 or emailing news@wuft.org.
Previous Florida Department of Education Reviewing Alachua County’s Proposed Discrete Math Course
Next Belleview Toddler Becomes Ambassador For Down Syndrome