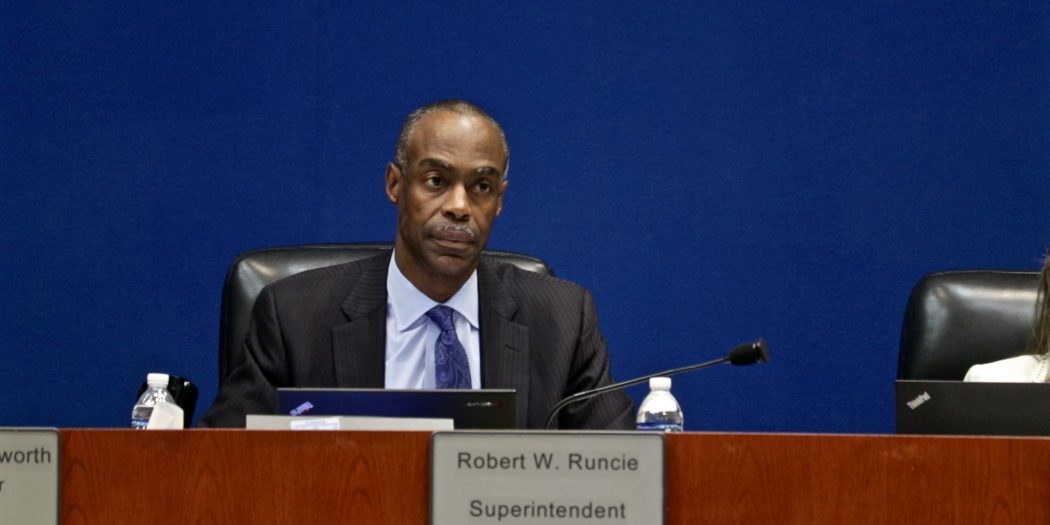 FORT LAUDERDALE — Robert Runcie, the Broward County schools superintendent who faced criticism following the Parkland shooting, will not be removed from office.

The 6-3 vote on whether or not to keep Runcie from continuing his eighth year in the role followed a nearly seven-hour debate on Tuesday.

“We always need to recognize that we are not perfect,” Runcie said following the Broward County School Board’s decision. “There are things we need to work on to get better.”

Hundreds of people, mostly Runcie’s supporters and a handful of his opposers, filled the venue. Parents, mayors, principals and activists made up the nearly 80 people who spoke and voiced their opinions to the board prior to the vote.

Runcie’s supporters spoke on many topics such as academic achievements in schools, graduation rates and increasing cultural and LGBTQ acceptance.

Janice Hayes, a former Broward County student whose children and grandchildren attended the county’s schools, spoke highly of Runcie’s role as a leader.

“Do not take Mr. Runcie out of the cockpit,” Hayes said. “He’s the best pilot this district ever had.”

Other supporters, like Hazelle Rogers, mayor of Lauderdale Lakes, praised Runcie for his improvements in lowering arrest rates among youth and increasing trust within the county.

“Mr. Runcie has turned this school district around,” Rogers said. “We can’t dismantle the entire Broward County School District by removing that glue.”

Max Schachter, whose son Alex Schachter, 14, was killed in the Parkland shooting, spoke about the failures he’s noticed in the district.

“It is time to stop making excuses for the physical condition of our schools and never-ending delays in primary renovations,” he said. “We need new leadership in this district. Our kids are not secure, and they are not learning.”

The decision on Runcie’s fate as superintendent at one point transitioned into a racial debate.

“Many of us are avoiding the real facts that this is about privilege,” said Darryl Holsendolph, one of the speakers and a member of the NAACP. “All communities have had to deal with the death of a child, whether it be a school building or across the street in the school or in a nearby park.”

Jennifer Adler, a parent and former Broward County middle school teacher, said this is far from a race issue.

“It’s all about accountability,” she said. “We need a change and someone new to help us all heal. Why are our students and faculty safer in an airport or a federal building than they are at school?”

After four hours of public commentary, board members Lori Alhadeff, Robin Bartleman and Nora Rupert voted in favor of removing Runcie from his position of power. Alhadeff, who lost her 14-year-old daughter Alyssa in the Parkland shooting, originally added the initiative to the board’s agenda.

“I move to terminate Superintendent Robert Runcie for just cause based on willful neglect of duty effective immediately,” Alhadeff said. “As board members, our No. 1 job is to provide oversight and accountability for Broward County Public Schools.”

Rupert, the District 7 representative, suggested Runcie receive an interim evaluation and improve his communication with the board. These were among the many suggestions on what she calls her “needs improvement list.”

After making her statement, Rupert also read aloud a letter written by Stephen Marante, the former student adviser to the school board.

In the letter, Marante wrote, “I am afraid he [Runcie] is no longer the leader our county needs. There has been a failure to rise to the occasion and lead with unity, vision, clarity and resolve after 2/14.”

Good spoke about Runcie’s desire to address county-wide issues while helping the community heal after the tragedy at Marjory Stoneman Douglas High School.

“This has been a very difficult year. A very painful year,” Good said. “Nobody has walked in his shoes.”

Levinson argued that Runcie and the school board have made changes in schools following the shooting.

“It is just wrong to make Superintendent Runcie the scapegoat,” the District 6 representative said. “It is complete B.S. to say nothing has been done for safety.”

In his closing remarks, Runcie said everyone needs to come together to do what is best for the county.

“Safety in schools will always be our number one priority,” he said. “It always has been. it always will be.”

Meredith is a reporter who can be contacted by calling 352-392-6397 or emailing news@wuft.org.
Previous Florida’s Legislative Session Begins With A Division In Ideas
Next The Point, March 6, 2019: The Takeaways From Florida’s Opening Day Of Session