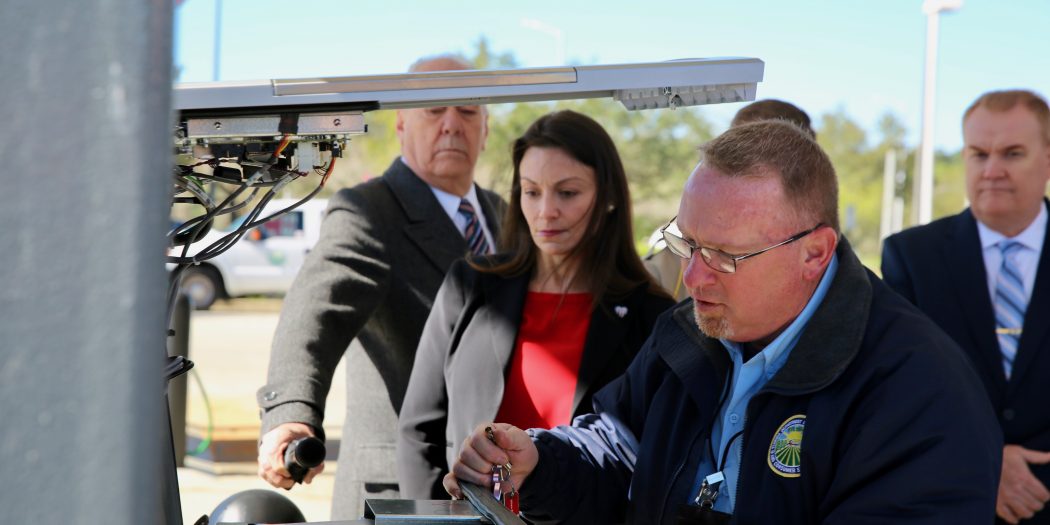 State Agriculture Commissioner Nikki Fried took a peek into the innards of a convenience-store fuel pump Wednesday as part of an awareness campaign warning Floridians that scammers are after their card numbers.(Courtesy of Department of Agriculture and Consumer Services)

State Agriculture Commissioner Nikki Fried took a peek into the innards of a convenience-store fuel pump Wednesday as part of an awareness campaign warning Floridians that scammers are after their card numbers.

Skimming is a technique by which criminals internally install or externally overlay devices to payment terminals, usually those of gas pumps or ATM machines, to steal encoded credit card data from users.

The event was held halfway through National Consumer Protection Week, a nationwide effort by the Federal Trade Commission to raise consumer awareness about scams.

“Please be aware of the situation and make sure you’re protecting yourself,” Fried said. “We are going to do our part, but make sure that you are doing your part, too.”

“More than 2,250 gas pump skimmers have been located and removed statewide since March 2015, according to the Office of Agricultural Law Enforcement.”

The illegal and sophisticated technology is largely undetectable to consumers, but can potentially result in up to $1 million of fraudulent charges per location, Fried said.

Gas pump skimmers are a growing problem in Florida, with potential for $1 million in fraud per device.

Here are 5 ways to protect yourself at the pump, and how @FDACS and law enforcement are working to keep you safe.#ConsumerProtection #NCPW2019 https://t.co/3vanIqWL3W pic.twitter.com/QunMmsSq4X

She has been a victim of credit card skimming, herself, at three separate gas pumps in Broward County, where the count of located skimmers nearly doubles that of any other county.

Fried also announced proposed legislation, Senate Bill 1652 and House Bill 1239, that would stiffen penalties for fraudulent perpetrators of this kind and create an inter-agency task force to further combat skimming.

She stood alongside department officials, including William Snipes, an inspector of the Division of Consumer Services, and Lt. Colonel Daniel Williamson, the assistant director for the Office of Agricultural Law Enforcement, at fuel pump No.1 of the GATE gas station.

Snipes, one of 55 Florida skimmer inspectors, unlocked the door of the gas pump to demonstrate a routine inspection.

Snipes later explained the evolution of the illegal skimming technology. Years ago, criminals would have to break into a pump, install a device the size of a thumb drive and then return to the pump to manually retrieve the data.

Today, it is much easier for criminals, he said.

Now, criminals can install skimmers with Bluetooth technology — and, most recently, SIM cards that allow them to retrieve the encoded data from almost anywhere in the world.

Gas stations can somewhat prevent the issue by using pumps with keys that are harder to re-cut and pick, or by upgrading to fuel pumps with alarm systems or “self-destruct” features that freeze the pump once it has been compromised. Snipes said recently, inspectors found pumps in Tallahassee manually broken into with crowbars.

Snipes urges consumers to avoid pumps that appear to be tampered with, and to choose a pump towards the center, in the line of a cashier attendant’s sight.

Fried recommends consumers use a credit card instead of a debit card at a gas pump to take advantage of its built-in fraud-detection software and avoid entering a PIN number that can be stolen.

The consensus is that there is not a single solution to the sophisticated issue.

“Florida has one of the highest rates of credit card fraud in America, and we take very seriously our responsibility to investigate and help stop that activity,” Lt. Colonel Daniel Williamson said.

The Department of Agriculture and Consumer Services investigates all consumer claims. Consumers who fear they may have experienced gas pump skimming can file a concern to FloridaConsumerHelp.com or call 1-800-HELP-FLA.

Gabriella Paul is a reporter for WUFT. She can be reached at gabbympaul@ufl.edu.
Previous Senators Joe Gruters, Keith Perry Lead 2019 Session In Number Of Bills Filed Or Co-Sponsored
Next Behind The History That Rochelle’s Trio Of Giant Trees Have Witnessed