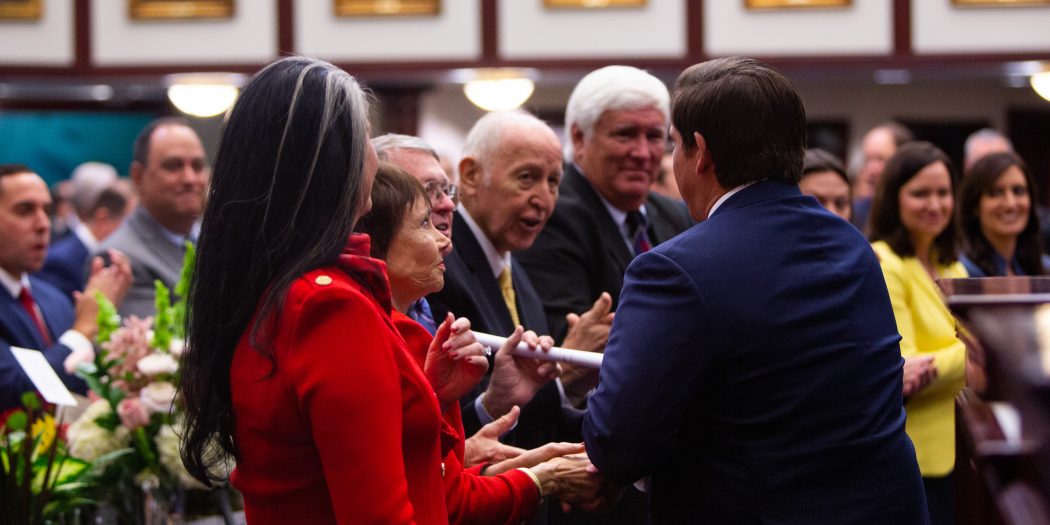 Florida Cabinet members shake Gov. Ron DeSantis' hand after he delivered the State of the State address at the House of Representatives on the first day of Florida's legislative session on March 5, 2019. Senators, representatives and his Cabinet were present to hear his last speech before they begin the 60-session of passing laws. (Cat Gloria/ WUFT Capitol)

Florida’s Legislative Session Begins With A Division In Ideas

Moments after the joint session headlined by Gov. Ron DeSantis adjourned, Democratic lawmakers regathered in the rotunda to denounce the governor’s priorities and unveil their own. They stood among a crowd of advocates holding white signs that read, “Sunrise Agenda.”

Florida’s representatives and senators will spend the next few months at the Capitol with one mandatory purpose — to pass a budget. Among the lawmakers’ other duties is to consider roughly 3400 bills that were filed by the pre-session deadline.

Senate President Bill Galvano called DeSantis to deliver the ceremonial State of the State address shortly after the joint session started. DeSantis began with enthusiasm for the Florida legislature, recalling a different experience in Washington.

“Having spent three terms in a different legislature, a prison known as the U.S. House of Representatives, it is quite a privilege to be able to work with a legislative body that has demonstrated the ability to get things done and to lead,” DeSantis said.

He recounted his accomplishments so far as governor, such as the Cabinet’s posthumous pardon of the Groveland Four after two years of inaction by former governor Rick Scott. The Groveland Four was a group of four African-Americans accused of raping a white woman 70 years ago in Lake County.

“It is never too late to do the right thing,” DeSantis said.

DeSantis acknowledged Carol Greenlee, the daughter of Charles Greenlee, one of the four accused, who stood in the gallery during his speech.

As he has previously stressed during his first two months in office, DeSantis again emphasized environmental and education reform. He wants to expedite water-quality projects and establish a task force to fight the algae blooms that have plagued the Sunshine State’s pristine beaches and intra-coastal waterways in recent summers.

After replacing the entire South Florida Water Management District, change is possible, he said. “This is just the beginning.”

DeSantis applauded Florida’s prestigious university system, but called for more focus on workforce education, an alternative to traditional college. Florida should fund apprenticeships and money for these institutions, he said.

On primary education, he spoke of eliminating the waiting lists for scholarships such as the Tax Credit Scholarship Program and the Gardiner Scholarship for special needs students, while replacing Common Core and placing a larger emphasis on American Civics.

DeSantis made it clear that he will support the recommendations of the Marjory Stoneman Douglas Commision, which includes arming teachers.

In efforts to reel in healthcare costs, the Governor reiterated his plan to purchase prescriptions from Canada, touting his support from President Donald Trump.

He also agreed with House Speaker Jose Oliva’s call for competition in the industry.

“We can’t just continue doing the same thing over and over and expecting a different result,” DeSantis said.

Among the Democratic lawmakers who gathered in rebuttal afterward, Rep. Anna Eskamani, D-Orlando, said DeSantis is more receptive than Scott, but certain rhetoric in his address on immigration and abortion access needed to be challenged.

A coalition of progressive organizations including Planned Parenthood, alongside Democratic legislators from both the House and the Senate spearheaded the Sunrise Agenda, which outlines ideas from the expansion of Medicaid to pro-LGBTQ non-discrimination mandates in the workplace.

“It’s a response to his agenda and an effort to paint a picture for a different alternative where Floridians can be inspired to join us,” Eskamani said.

Senate Minority Leader Audrey Gibson, D-Duval, criticized the governor for pushing for a stronger voucher program, rather than focusing on the state’s public school system.

“While the governor says his plan is about helping kids get a better education, especially disadvantaged kids, make no mistake,” she said. “The plan is all about draining millions of your tax dollars to give to private schools, while dismembering public education in the state of Florida.”

Gibson then shifted to school safety.

“Ironically, while he’s reluctant to preserve and protect public schools, the governor is willing to put more guns in them and call it school safety,” she said.

The minority leader vowed that Democrats will not support any push by the legislature to arm teachers.

Matthew is a reporter for WUFT News and Fresh Take Florida who can be reached by calling 786-332-8003 or emailing marrojas@ufl.edu.
Previous Florida Gov. DeSantis’ State Of The State
Next Broward County Votes to Keep Superintendent Robert Runcie