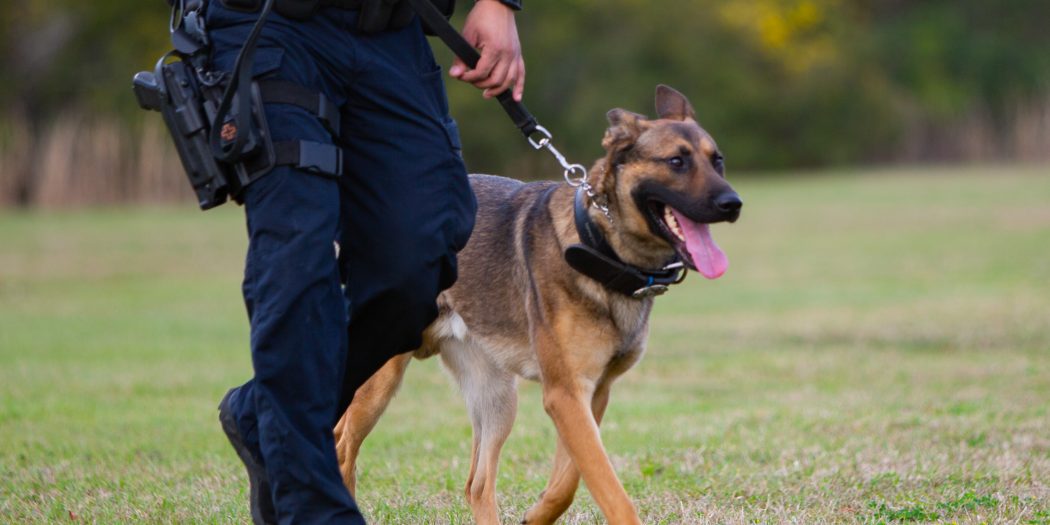 Meet A GPD K-9 In Support Of A New Bill

By Cat Gloria and Gabriella Paul

On a winter morning, Ace hopped into the squad car with handler Edward Ratliff. This was no ordinary patrol.

Ratliff and Ace drove to the Florida Capitol for the hearing on a piece of legislation of great importance to canine lovers. Senate Bill 96 increases the penalty for intentionally injuring or killing search-and-rescue dogs and horses employed by police and fire departments.

Ace came to support the bill.

The three-year-old German Shepherd is lucky. He’s never been hurt on the job during his year with Gainesville Police Department’s K-9 Unit.

Many dogs like Ace do suffer in the line of duty – 43 Florida K-9s have died in duty over the past 228 years, according to Officers Down Memorial Page records.

One such dog was Fang.

The Jacksonville Sheriff’s Office got a call for an armed carjacking in September of last year. The suspect, Jhamel Paskel, fled into the woods off Interstate 10. Law enforcement released Fan to chase down the 17-year-old.

Debbie Johnson, founder of the nonprofit, K9s United, heard about Fang and then called the local senator, Sen. Aaron Bean, R-Fernandina Beach, who agreed to sponsor the bill.

Bean tells lawmakers the story of Fang’s brutal end at the senate criminal justice committee meeting. Ace sits next to Bean, panting while he speaks.

Currently, it’s a third-degree felony to hurt or kill a police search-and-rescue or fire dog or horse. If SB 96 passes it would become a second-degree felony. That would possibly triple the prison time from a possible maximum of five years to 15 years.

The bill excites Ratliff. He couldn’t imagine living without Ace.

“He is the single most important thing in my life. If he ever got hurt I would be devastated,” Ratliff said. “I would lose my mind probably.”

“They both are laid back, and ready to learn,” Owens said. “Everything runs down-leash, and what I mean by that is the dog feels your emotions.”

After training for six months together, the two began patrolling Gainesville neighborhoods on the 9 p.m. to 7 a.m. shift.

As a dual-purpose K-9, Ace is trained to track suspects and detect narcotics. The pair often respond first to dangerous crime scenes in the dead of night.

Ratliff drives down back streets while Ace lounges in the carved-out plastic backseat.

When a call comes through the radio, Ace dashes to the center console of the squad car, pressing his snout against Ratliff.

Cars evacuate their lanes. The pair speeds to the scene, sirens blaring. Ace whines along.

“Let’s go get those bad robbers,” Ratliff says to the K-9.

They jump out of the car and onto the scene, tracking the suspect. Ace sniffs the ground for fear, a scent humans can’t detect.

Some tracks end in success and some are too late.

Back into the car.

The two have full-on conversations throughout the night. They discuss everything, but Ace’s favorite topic is play time.

On slow nights Ratliff pulls into a park to play ball with Ace. The minute he makes the turn, Ace jumps up to the console and nudges Ratliff in excitement as the car comes to a stop.

He explodes out of the car when Ratliff opens the door.

After a few throws in the black of night, they get back in the car and continue scanning town.

Ace presses his head against Ratliff’s to beg for a scratch.

When the shift is over, they head home and pass out together until it’s time to do it again.

Ratliff considers Ace to be his best friend.

Days after Bean filed the proposal in November, also known as the Fang Memorial Bill, legislators filed a similar one HB 67, in the House.

Since its first hearing, the bill has been absorbed by four co-sponsors and is now in the judiciary committee. It must pass through the floor and Gov. Ron DeSantis’ must sign before it becomes law.

Chief Financial Officer Jimmy Patronis said that K-9s are an asset to the state.

The CFO, who also presides as the State Fire Marshal, has acquired six K-9 teams under his jurisdiction in the last two years. The six total — five accelerant detection and one bomb-sniffing unit — are prepared to be deployed across the state at a moment’s notice. He predicts the measure will garner enthusiasm from both legislators and law enforcement.

People tend to kick or hit K-9s in fear of going to jail, Owens said.

Cat is a reporter for WUFT News and Fresh Take Florida who can be reached by calling 954-657-3385 or emailing cgloria@ufl.edu.
Previous Airport Authority Passes Motion To Sell Industrial Lot
Next Photo: SpaceX’s Crew Dragon Makes Lift Off