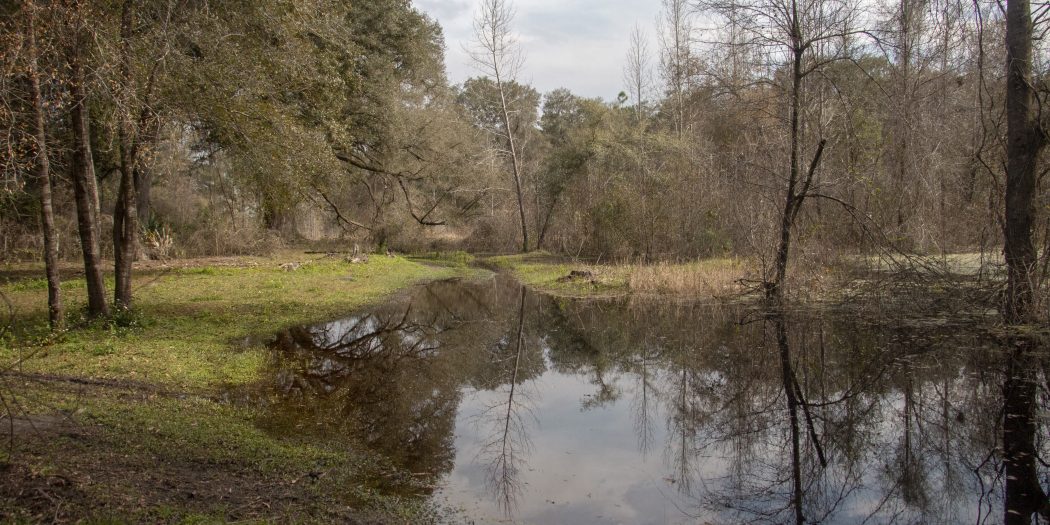 Many driveways near the Kanapaha Prairie are now flooded. Residents worry that if a short term solution is not found the water will continue creeping toward their homes. (Shelbie Eakins/WUFT News)

Residents of the Kanapaha Prairie area southwest of Gainesville are calling for more immediate solutions as floodwaters rise near their neighborhood.

In April 1998, these emergency management powers included paying Ramsey Stock Farm Inc. more than $50,000 of public funds, which paid for the farm’s culverts to be closed. The closure restricted the flow of water that drains off of the farm and into the Kanapaha Prairie area.

John Harvey of the Thousand Oaks Homeowners Association said he’s thankful for the longterm water management plans that the county has in place but believes a two-month wait like the one in 1998 will come too late for many residents in the flooded area.

“Two months from now, if we keep going where we’re going, we’re going to be way past just a few houses flooded,” Harvey said. “We have the short term concerns.”

Floyd Thompson, chair of the Board for Northern Kanapaha Farmers Association, brought images of a stream in his own backyard to show the level of flooding residents are experiencing. Before the flooding, he could step across the stream.

Floyd now says that same stream is a half a mile wide.

“We’ve not had a lot of rain since September but there’s a tremendous amount of water coming our way from the prairie south of us,” Thompson said. “If we get a foot of rain in the next couple of months, we’re really looking at a lot of water.”

Harvey and Thompson presented to the board a short-term contingency plan for the flooding. In addition to declaring the local state of emergency, the proposal included county staff determining what structural measures need to be installed to stop water draining from Ramsey Stock Farm, preparing an agreement with Ramsey Stock Farm to install those measures, and draft a permit application to the St. Johns River Water Management District to approve the use of the measures and request that the culverts under Interstate Highway 75 be closed as well.

“I think what is being requested of us is very reasonable,” Hutchinson said. “I know that we are looking at some of the long-term issues, but the weather pattern that we’re in could mean we need to begin exploring these issues.”

But according to Jim Harriott, the deputy county manager for public works and growth management, there have been many roadblocks to implementing a plan like the one brought before the board.

“We have talked to the Ramsey property owners. They are unwilling sellers at this point. They have indicated that,” Harriott said.

Marty Smith, the attorney representing the Ramsey family, made it clear that closing the culverts on Ramsey Stock Farm would affect more than the Ramseys.

The culverts currently keep water from flooding a private roadway that the Ramsey family uses to access other parts of their property.

“If they didn’t have that roadway there, then the water would flow out freely even more so than it’s doing now,” Smith said.

Unless the county is able to reach an agreement with the owners of the Ramsey Stock Farm, the culverts on the property will remain open and water will continue to drain into the Kanapaha Prairie area.

According to Harriott, the county is still taking steps to evaluate using the property even though an agreement has not yet been reached.

Alachua County applied for a grant in February from the St. Johns River Water Management District. The grant would offset some of the costs that would come from an agreement with Ramsey Stock Farm. Because the county does not have property rights on the farm, the project is not grant eligible. The county is applying regardless.

“We are putting in an application anyway and asking them to formally tell us no,” Harriott said.

According to James Troiano, the intergovernmental coordinator for the St. Johns River District, the project would be ineligible for the grant because the county did not have ownership or control of the property by Feb. 15, 2019.

For residents like James Harvey, each day that passes without a concrete plan of action means another day the floodwaters come closer and closer to homes.

“I watch it go up each day,” Harvey said.

Shelbie is a reporter for WUFT News who can be reached by emailing news@wuft.org or calling 352-392-6397.
Previous March 1, 2019: Morning News In 90
Next Cost Doubles For Restoration Project At Hogtown Creek Headwaters Nature Park