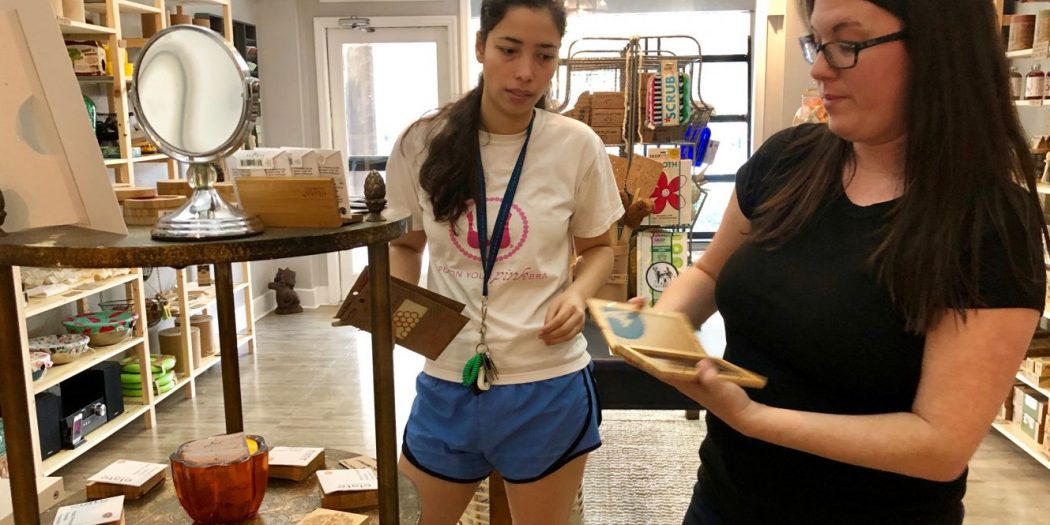 Gainesville City Commission meetings about the ban of single-use Styrofoam and plastic, a troublesome viral video and a customer’s email all led a local restaurant owner to take action.

“If this is going to happen anyway,” said Joy Hughes, 35, a co-owner of two Loosey’s restaurants, “then I need to figure out how [my businesses] are going to react to that.”

The ban goes into effect Aug. 1 as the city commits to reducing plastic usage. Retailers and restaurants will no longer offer plastic bags and foam containers as to-go boxes to customers.

So while shoppers might still buy plastic toothbrushes at a supermarket, at Hughes’ new store they would purchase one that’s bamboo. Instead of finding deodorant on a convenience market shelf, they would find a recipe for making their own at LifeUnplastic. And her shop already offers free paper bags and sells mason jars for customers to take away products.

With Allison Bechtloff, her childhood friend from Volusia County, signed on as manager, Life Unplastic aims to hold free workshops focusing on deodorant and cosmetics tutorials, along with alternative ways to make soap, facial masks and mascara.

“As more workshops are held, that will gain the attention of those around me, the more people will adapt that to their own lifestyles,” Bechtloff, 33, said of a zero-waste lifestyle.

“Good timing” is how Hughes described her store’s opening after the ban passed. It started with an email in 2017. A

A Loosey’s customer suggested the restaurant ask its patrons if they would like a plastic straw instead of being given one automatically.

The change was well-received.

But then a viral video of a sea turtle with a plastic straw in its nose pushed Hughes further.

“What if that was a stir straw from my bar?” Hughes said.

“The owners are very knowledgeable and love to talk to customers about what they want and need to start living zero waste,” Waddle said.

Hughes said she realizes that living zero-waste is not for everybody.

“The average person that is busy and has jobs and kids won’t necessarily spend the same amount of time,” she said about purchasing items not packaged in plastic.

Juliana Cantillo of Gainesville, currently a student at Vanderbilt University in Nashville, visited Life Unplastic for the first time recently after reading about it on Facebook.

Saying she had only been able to purchase eco-friendly products online, Cantillo was excited about having a local store where she can look at and feel the products before buying them.

“It’s just really nice to see other people that are invested as well,” she said.

“Some may view it as expensive, but these products also replace things for the long term,” Moore said. “I think it has potential to be successful.”

Hughes anticipates having more customers after the plastic and Styrofoam ban goes into effect.

“Hopefully, someday, I’m out of business because Publix and Aldi and Trader Joe’s are already [plastic-free], so there won’t be a need for such a niche store,” she said.