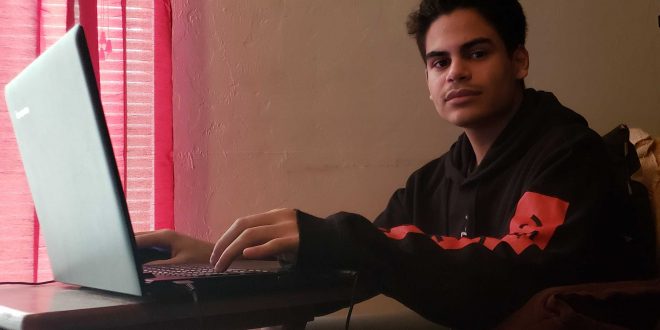 Orlando Merced-O'Neill says he was a victim of bullying throughout many of his school years in Alachua County. He supports the concept of the Hope Scholarship. (Alex Camargo/WUFT News)

Nearly 2,500 Florida students have applied for a new scholarship intended to help victims of bullying.

About 117 students statewide have been awarded one so far this school year, and Orange County had the highest number of recipients with 16.

The 2018 law creating the Hope Scholarship took effect in July, and it allows students to apply for a scholarship to transfer to a private school of their choosing.

The law allows students who have been a victim of a range of crimes — battery, harassment, hazing, bullying, kidnapping, physical attack, robbery, sexual offenses, threats, intimidation or fighting at school — have the opportunity to transfer to another public school or enroll at an approved private school.

While county public schools are mandated to follow the law and offer the scholarship, the district has had a difficult time doing so.

The scholarship is funded by a sales tax contribution of purchased cars from Florida residents. The state reports average private school scholarships as $6,500 for elementary school, $6,800 for middle school and $7,100 for high school.

“The only real headache is the poorly-drafted wording of the new law,” Brian Moore, staff attorney for the School Board of Alachua County, wrote in an email. “So, we just have to decide, do we give the form only when we find that the incident did occur, or do we give it regardless?”

School board members decided to provide the Hope Scholarship form to any parent who requests one, Moore said, even if the incident reported has yet to be proven true.

School administrators are required to investigate the reported incident within 15 days to determine if the situation had occurred.

If the incident has not been proven, then the board members mark the cases as, “unsubstantiated” or “unable to verify.”

“It clearly is meant for kids who suffered actual harm, but it is written in a way that suggests everyone should get the form even if we find that the incident didn’t happen or cannot corroborate that it did,” Moore said.

Moreover, if the incident is found to be untrue, the law doesn’t have a protocol to handle the situation, said Heidie Nesset, a Hope Scholarship implementation team leader.

This is one of the concerns the School Board of Alachua County has with the Hope Scholarship.

Board Chairman Robert Hyatt said he worries the scholarship is another way to privatize education.

“I don’t think it’s a genuine attempt to help the bullying situation,” Hyatt said. “If they’re concerned about school safety, they might also want to maybe look at easy access to weapons and other things.”

Another concern is the fact that the victim is being uprooted from a school and school system they know well, and the bully remains at the same school.

“Someone that has been victimized sometimes does not want to leave the only school they’ve ever known,” said Carmen Ward, president of the Alachua County Education Association, a union for district teachers. “It doesn’t address the underlying problem that there is a lot of bullying.”

According to the Alachua County Public Schools’ Bullying Resource Center, if a student has been found to have committed an act of bullying or harassment, including sexual harassment, then they may receive behavioral interventions or can be disciplined up to suspension or expulsion.

Board Vice Chairwoman Eileen Roy does not agree with that form of discipline because it leads to the student missing classes. Instead, Roy believes in Jeffrey Weisberg’s methods, which allows students to learn how to communicate and diffuse a situation.

“Rather than have a harsher discipline method such as suspension or expulsion,” Roy said, “it’s instead designed to educate the child.”

Besides disciplinary action, parents should be building a relationship with their school’s administrators to find the root of the problem for both parties, said Pam Korithoski, president of the Alachua County Council of PTAs.

“I think public school administrators have the kids’ best interest at heart,” she said. “Nobody wants anyone being hurt physically, mentally, emotionally.”

Nesset works for Step Up For Students, the Jacksonville-based non-profit organization that administers the Hope Scholarships. In a written statement, she did not address the above concerns.

“The Hope Scholarship was created as a program that provides students and their families with options,” Nesset wrote. “The program helps empower families and allows for students to refocus on their education in an environment where they feel safe and secure.”

Orlando Merced-O’Neill, a 19-year-old senior at Buchholz High School, said the scholarship can give students an option to leave a toxic situation and receive a private school education they likely would not have otherwise.

Merced-O’Neill said he was physically harassed and mentally abused during the majority of his elementary and middle school years.

While being bullied, he felt hollow, he said, and lost trust in people because he wasn’t sure who might bully him next.

“It’s one of those moments where you had a fake smile and you felt kind of empty,” said Merced-O’Neill.

Merced-O’Neill eventually sought help from Partners in Adolescent Lifestyle Support (PALS), he said. PALS is a suicide and violence prevention program available in most high schools across Gainesville.

He found the program in the seventh grade and said he used it as a way to cope with his anxiety: “I ended up kind of reforming who I was and became more of a positive and outgoing person.”

Alexandra is a reporter for WUFT News who can be reached by emailing news@wuft.org or calling 352-392-6397.
Previous Hundreds Of People Attend Judge Meshon Rawls’ Investiture Ceremony
Next The Point, Feb. 25, 2019: The Problems Some Education Officials See With Florida’s Hope Scholarships