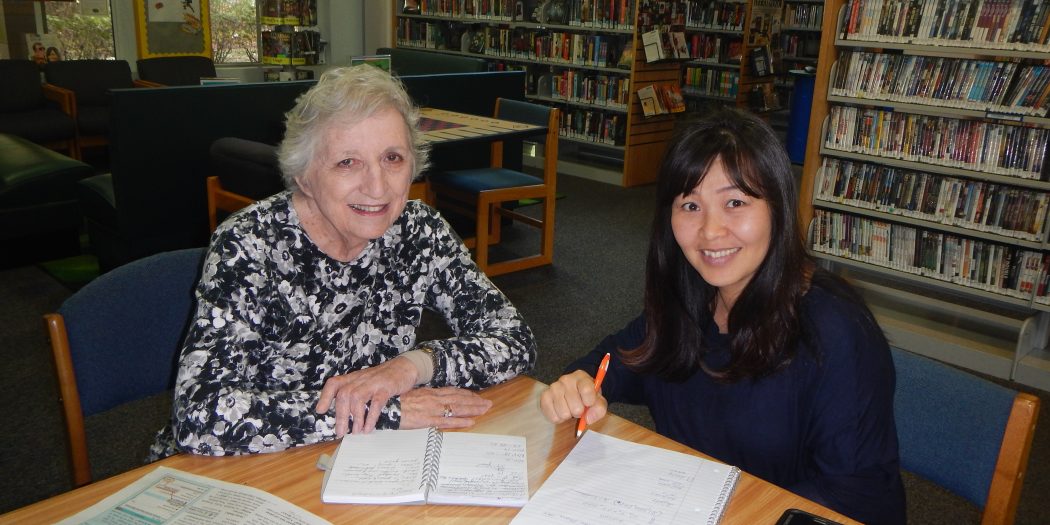 Eileen Wagner and her student Jinkyoung Lee practice conversational English at the Tower Road branch library. Coaches and students are expected to meet at least one hour a week to talk. (Photo courtesy of Patricia Carr)

English literacy is a family affair for Bruno Pedreira.

Pedreira, with his family in tow, arrived in July for a year of agronomy research with the University of Florida. While he settled into work, his daughters settled into J.J. Finley Elementary School’s ESOL (English for Speakers of Other Languages) program. His wife, Sylvia Moraes, found her own tutor at the library: the Tower Road branch of the Alachua County Library District, to be exact.

A tip from another member of Gainesville’s Brazilian community inspired Pedreira and Moraes to go. Pedreira said it was at a social mixer where Moraes met her coach. Within weeks of arriving in the United States, Moraes was a part of the library’s English Language Learners (ELLs) program.

The program this month began using a $10,000 grant from the American Library Association that would help it expand and offer tutoring services to more people like Moraes. The Alachua County Library District was one of 16 recipients. Patricia Carr, the project director for the ELLs program, said the aid was much needed.

“We have a lot of people who come in every day,” Carr said. “Some days, we get two or three applicants a day.”

Pedreira took a couple months to settle before following his wife’s lead. At another one of the program’s mixers, he met Bruce Nodine. Nodine agreed to be his English coach, and they’ve met every week since then. Pedreira said they always plan to meet for an hour, but it never ends in an hour.

They’ve got so much to talk about. Nodine will bring English articles about Brazilian events, and they’ll talk for hours about what’s happening in the world. They’ll pause every now and then for Nodine to correct Pedreira’s pronunciation or introduce a new phrase.

“It’s probably one of the few hours that I have in my week where I can speak with someone who corrects me,” Pedreira said. “Most of the people who I have in my day-to-day understand what I’m saying, but they will never correct me.”

Pedreira’s daughters have no problem correcting him. “Dad, it’s not said like that. Say it like this,” they’ll say. Seven months later, his five-year-old daughter has finished the ESOL program, and his nine-year-old will probably follow soon, Pedreira said.

“It’s priceless,” he said. “For me, speaking English, reading English and writing English is always one thing that my brain tries to do, but it’s never easy. For them, it’s completely easy.”

Pedreira said he and his wife struggle more than their daughters, but the ELLs program at the library makes learning English interesting and interactive.

Carr is hoping the $10,000 from the American Dream Literacy Initiative grant will make the program more interactive. She said the money will be used to buy new textbooks, art supplies for a Literacy Through the Arts initiative and 18 Apple iPads among other things. The iPads will introduce technology to the program and allow students to practice conversational English.

Carr said the ELLs program is open to adults with intermediate to high levels of English skills. People who struggle with English literacy, both non-native and native speakers, can work with the library’s literacy department.

The library’s program is one of hundreds across the state of Florida. Greg Smith, executive director of the Florida Literacy Coalition, said there’s at least one literacy program in almost every county in Florida. Programs range from ESOL classes to GED preparation to adult basic education, where native English speakers learn the fundamentals of reading, writing and math.

The programs are held in different locations such as public schools, colleges, churches and more. Smith said it’s just a matter of people taking advantage of them.

“It’s a difficult call for folks to make, but when they do and they stick with it, they can realize success,” Smith said.

The current statistics on literacy rates in Florida are uncertain, Smith said. The last study that featured local research was in 2003 from the National Assessment of Adult Literacy (NAAL).

Other studies since then are based on self-reported numbers for people’s literacy skills.

“Adults who have limited literacy skills often are not very comfortable sharing that information,” Smith said. “They hide that information. It’s sometimes a source of embarrassment.”

In 2003, that NAAL study reported 20 percent of people in Florida lacked basic literacy skills. Counties in north central Florida were generally in between 10 to 20 percent, according to the NAAL study. Hendry County in southwest Florida had the highest illiteracy rate with 42 percent.

Marion County was at 14 percent in 2003, according to NAAL. Summer Gill is the executive director of the Marion County Literacy Council, which hosts various programs aimed toward helping people achieve their literacy goals.

About 500 students pass through its programs every year, and at least half are in the ESOL program. Gill said many other students want to improve their English to get their GED or take entrance exams to the military, nursing school or other institutions.

The Marion County Literacy Council has a $40 registration fee, but if price is an issue, the fee can be waived. The only other costs associated with the programs are from outside sources, such as the $128 cost of taking the GED. Gill said their organization can’t pay those costs themselves, but they do try to partner with other programs that’ll help.

Many of the students they see have rough pasts, Gill said. Over and over again, she’d hear stories of kids who tried to get help and weren’t heard and who later grew up into adults with literacy struggles. Some had undiagnosed learning disabilities. Others lived in extreme poverty.

“Whether it was the parent or the school, somebody dropped the ball with them,” Gill said. “We are what happens when they grow up.”

Jessica is a reporter for WUFT News who can be reached by emailing news@wuft.org or calling 352-392-6397.
Previous Evening News in 90: Feb. 21, 2019
Next The Point, Feb. 22, 2019: UCF President Resigns, While UF Is Also Examining Alleged Misuse Of Construction Dollars