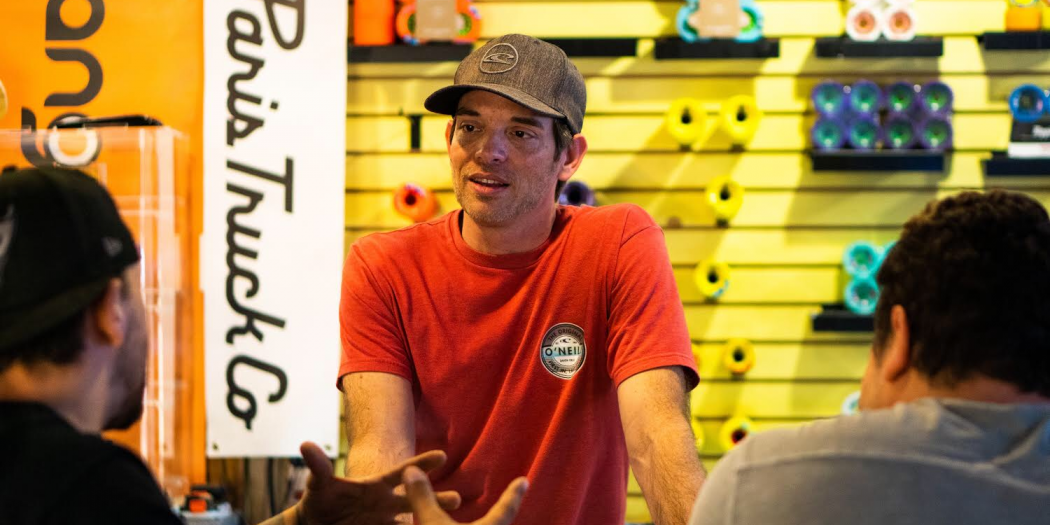 Peter Harter listens to a customer’s question. Harter jokes that he is a bad salesman because he rarely recommends the most expensive options. (Justin Bright/WUFT News)

Gainesville’s surfers and skateboarders will be without their local shop for the first time in more than two decades.

Operating a surf and skate shop proved difficult in the age of internet shopping, owner Tom Glikes said. He estimates Freeride will close within the next few months, once it sells through its inventory.

Glikes in 1994 bought the building on 420 NW 13th St. — with help from friend Meredith Burch and brother Richard Glikes — from the owners of Inland Surf Shop. Freeride found success by providing an inventory that was carefully selected by “real surfers and skaters,” Glikes said.

Inland Surf Shop experienced skateboarding’s boom during the 1970s and ‘80s and played an important role in cultivating the budding skate scene in Gainesville. When Glikes found out that Inland was closing, he wanted to continue what it started.

“Gainesville has always had a vibrant surf and skate community, and I’ve been a part of it since the mid-1970s,” said Glikes, who grew up skating the drainage ditches along Waldo Road near Fairbanks in northeast Alachua County. “It was nice to keep the store open and alive and support the locals.”

Today’s customers like Lee and Noah Mintz said they will miss the reliability and friendliness that Freeride provides.

“They’re like an honest mechanic,” Lee Mintz said. “They don’t sell you any more than you need. Online or chain stores will make you think you need a brand new board when Freeride will say that you only need to replace one part.”

Lee Mintz, 53, first brought his son, Noah, 20, to Freeride when Noah was a junior in high school. Store manager Peter Harter helped Noah buy his first longboard that day. Since then, the Mintzes consider themselves loyal customers.

Freeride placed apparel and older items on sales of up to 40 percent. It is still receiving new inventory for skate and surf products.

Over the past five years, several parties have approached Glikes with interest in buying the property. He said they never reached an agreement, so the property’s post-Freeride future is unclear.

“We’ve decided it’s time to pack things up,” Glikes said. “It’s been difficult on our employees and customers the past few years because we’ve been in a state of limbo where we don’t know what the future holds.”

Harter, an employee for 11 years, has seen how cyclical the industry can be. Surfing and skateboarding have years where they experience booms and years where there are far less people participating, he said.

“It’s been hard to say goodbye,” said Harter, a University of Florida graduate. “A lot of the customers have become family to us.”

To Gainesville skateboarder Devon Spence, having somewhere to go and meet up with other friends in the community makes it easier to get through slow years.

“Your local shop is like the mecca for local skaters,” Spence said. “I swing through at least once a week. Sometimes I buy stuff, but mostly it’s to see everybody.”

Spence moved to Gainesville from Orlando in 2013 and bought his first skateboard from Freeride six months later. He was amazed by how tight the community was in Gainesville and fondly recalls how riders would hang out at the home of Harter and others after competitions.

Ocala resident Jonathan Vasquez recently drove an hour to Freeride to buy a new skateboard. He wanted to stand on the board himself before buying it.

“A lot of kids shop online nowadays and don’t end up supporting their local surf shops,” Vasquez said. “They don’t really realize that local shops are the ones that are the lifeblood of the community.”

Glikes said he’s confident someone else will fill the skate and surf shop void Freeride leaves behind.

“This is not an industry that anyone gets into for the money,” Glikes said. “You do it because you love it more than anything.”

Justin is a reporter for WUFT News who can be reached by emailing news@wuft.org or calling 352-392-6397.
Previous Body Of 22-Year-Old Found In Little Lake Sante Fe
Next The Point, Feb. 20, 2019: State Lawmaker Lashes Out After WUFT Reporter Questions His Donors About Blackface Photo