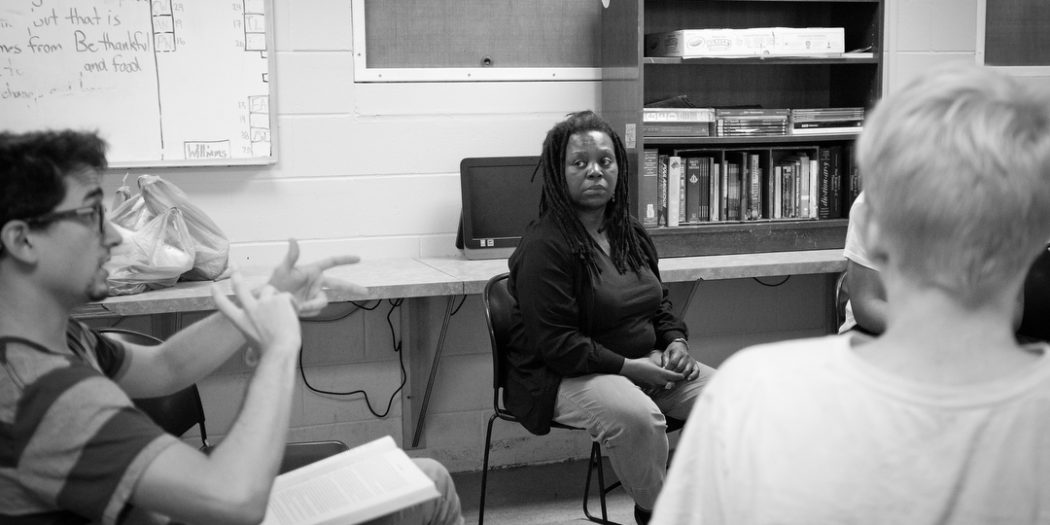 Juvenile Offenders Get Chance In The Spotlight With Guidance From Hippodrome, River Phoenix Center

A Gainesville theater company hopes to shine a new light on the lives of 24 juvenile offenders and draw the curtains on their criminal history.

Last week a group from the Hippodrome State Theatre and the River Phoenix Center for Peacebuilding made their first visits to Union Juvenile Residential Facility in Raiford, a center housing juvenile offenders ages 13 to 18, who have been convicted for crimes.  In a collaboration with the center, the teenagers will showcase a play written and performed by themselves at the Hippodrome State Theatre.

The small interior almost resembles a clinic.  Laila Fakhoury, a restorative justice advocacy worker, passed a heavy glass door, a waiting room and a metal detector. She and the other workers entered a small classroom and then arranged chairs in a circle for the teenagers to sit. The boys took their seats after pat-downs by staff.

The collaboration offers the teens a chance to express themselves or share their personal stories on the stage, said Gabrielle Byam, education director for the Hippodrome.

Byam, who began her theater career almost 40 years ago in New York, is not new to using theater outside of entertainment.

She said the team will focus on using restorative justice techniques to help the teenagers develop their own play. Restorative justice, Byam explained, is a mediation tool to resolve problems through rehabilitation and prevent future misbehavior.  She said the technique is typically used in classroom settings, but can be incorporated within theater and arts curriculum.

“It lends itself to the theatrical format and one of the first questions asked is ‘What happened?’,” she said.  “A lot of that has to do with what the motivation was and what was it that motivated your wrongdoing.”

Similar questions are asked when looking at characters in theater, she said.

Fakhoury said the goal is to identify their motivations so they are not in a cycle of committing offenses and being sent to prison where they cannot rehabilitate themselves.

Those in detention centers are often identified by their bad behavior or labeled by mistakes they made, said Heart Phoenix, board president at the River Phoenix Center for Peacebuilding.

“What we try to do is help them to see that they are not their behavior,” Phoenix said. “Their behavior manifests because underneath it all there are things that they need; that they just don’t know how to get without acting out.”

Officials at the juvenile center said they see the impact that the visits have had on the boys. Although this is the first time the detainees will perform themselves, theater and education professionals have previously visited the facility to teach theater techniques such as script writing and improvisation.

Alfonzo Jackson, unit director at Sequel Union Juvenile Residential Facility, has worked at the center since 2010 and said some of the teenagers start out of their comfort zone, but most are looking for different ways to express themselves, in this case through the arts and theater.

“With kids, they are always looking for something different,” Jackson said.

The teenagers also engage in additional activities and lessons to help them uncover themselves. One lesson uses an iceberg metaphor.

“We know we see about 15 percent of the iceberg and that underwater where you can’t see anything is the fullness of what is up there,” Phoenix said.

The team helps identify behaviors such as robbing, bullying or fighting, then ask them what might be below the water line. The teenagers usually respond with answers such as homelessness, poverty or lack of education, she said.

“They know they are punished and they did something wrong, but we are trying to help them recover and transform that behavior so they won’t do that again,” Phoenix said.