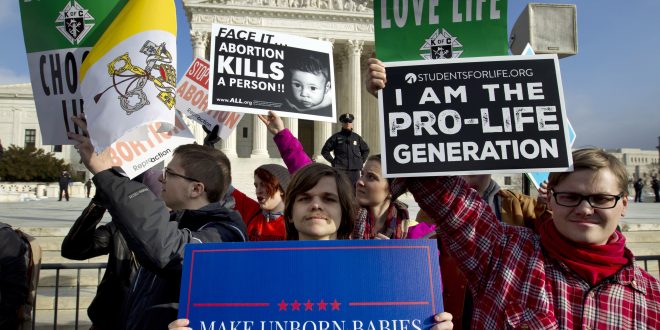 FILE - In this Friday, Jan. 18, 2019 file photo, anti-abortion activists protest outside of the U.S. Supreme Court, during the March for Life in Washington. President Trump's call for a ban on late-term abortions is unlikely to prevail in Congress, but Republican legislators in several states are pushing ahead with tough anti-abortion bills of their own that they hope can pass muster with the reconfigured U.S. Supreme Court. (AP Photo/Jose Luis Magana)

A pair of controversial bills introduced in the Florida Legislature aims to ban women from attaining an abortion when a fetus’ heartbeat is detected.

Similar legislation in other states have been stymied by governors, statehouses and the courts. But Florida’s bill sponsors say they are buoyed by more conservative faces on both the state and federal high courts.

“Being a constitutionalist, I believe that we have a very good chance of it passing a court challenge up to the Florida Supreme Court,” said Rep. Mike Hill, R-Pensacola, sponsor of the House bill.

Dennis Baxley, R-Ocala, is pushing a companion bill in the Senate.

The “heartbeat bill,” as it is commonly known, seeks to ban abortions at the time when a fetus’ heartbeat can be detected with a vaginal ultrasound. That can be as early as 5 1/2 to 6 weeks after gestation, before many women even know they are pregnant. Violating the proposed ban would be a third-degree felony.

As it is written, the proposed legislation makes no exceptions for survivors of rape or incest.

Currently Florida statute 390.0111 states that a woman cannot obtain an abortion after the end of the second trimester, except in cases of medical necessity.

The hurdle the Florida bill faces in becoming law is this: A court would have to overturn a precedent set by the U.S. Supreme Court in Roe v. Wade and other cases that the state cannot impose an “undue burden” on a woman seeking an abortion before fetal viability, which generally occurs between 24 and 26 weeks.

“Even though both the U.S. Supreme Court and the Florida Supreme Court are more conservative, it would be kind of a complete 180 to uphold a law like this,” she said.

To completely disregard precedent in such a drastic way would make the courts appear politically motivated, Ziegler said. The more likely alternative would be to implement incremental changes in the law to restrict abortion.

“I think that we can expect in Florida to have decisions at the state and federal level scaling back on abortion rights,” Ziegler said, “but I would be surprised if it went as quickly as the sponsors of this bill seem to think it will.”

The first state that attempted to pass a fetal heartbeat bill was Ohio in 2011. Since then, conservative legislators across America have penned dozens of anti-abortion bills. But because of the viability precedent, no heartbeat ban thus far has been enacted into law.

Florida is one of several states that are revisiting abortion rights. Across the nation, abortion laws have been challenged at the state level in legislatures and the courts.

“The Florida bill is one of several that have been filed across the country that are designed to give the Supreme Court an opportunity to overturn Roe v. Wade,” Ziegler said.

In Ohio, Republican Gov. John Kasich vetoed a fetal heartbeat abortion ban that passed through the legislature in 2016 on the grounds that the bill would likely be challenged in and blocked by the courts. Conservative legislators in Ohio tried to pass a similar bill in 2018, which Kasich also vetoed.

Currently, 14 states, including Florida, have proposed legislation that seeks to ban abortion after detection of a fetal heartbeat.

Baxley said he sponsored the Florida bill because he believes the political climate is changing.

“As this conversation sparked up across the country and a number of states were considering this issue, and how we deal with it, there was a pattern,” he said. “The pattern was the heartbeat.”

Anti-abortionists often point to a heartbeat to symbolize the life of the fetus.

That is not a concept accepted by the medical community, said Stephen Snow, the legislative chairman of the American College of Obstetrics and Gynecology District 12, which represents Florida.

“Scientists believe that if a fetus can’t survive outside the womb, really the mother has to make decisions about continuing the pregnancy,” he said.

The Florida bills, Snow said, substitute the term “unborn human being” for a fetus in an attempt to create vague wording that is left to interpretation.

“They’re creating language that could be interpreted by the courts in an adverse manner,” he said. “This bill is designed to create hurdles to prevent a legal medical procedure being performed in Florida.”

Snow cited other stipulations in the bill that would create a burden on some women seeking abortion, including a 24-hour waiting period between an ultrasound and an abortion procedure. This creates hardship for women who may need to travel long distances to obtain an abortion, he said.

In Florida, the Guttmacher Institute reported 86 abortion-providing facilities in 2014, the latest year for which data was available. About 70 percent of counties did not have any facilities at all.

The Gallop poll surveyed 1,024 adults from May 1-10 through telephone interviews using a sample drawn from Survey Sampling International, with a margin of sampling error of +/- 4 percentage points at the 95 percent confidence level.

In Florida, a 2014 Pew Research Center survey found 56 percent of adults supported legal abortion in all or most cases.

“Florida is kind of a purple state when it comes to abortion,” said Ziegler, the law professor. “It’s not particularly progressive or particularly conservative. It sort of sits in the middle.”

In Alabama, only 37 percent of adults surveyed said abortion should be legal in all or most cases. In Georgia, 48 percent.

Ziegler said these numbers indicate that a fetal heartbeat abortion ban may not be supported in Florida, regardless of more conservative courts that may be willing to chip away at legal precedent.

“Florida doesn’t have a history of passing restrictions that go as far,” she said. “You could say that’s partly because our supreme court has been different in the past than it is now, but the Pew poll would suggest that Florida voters are not particularly invested in far reaching abortion restrictions, even if they’re not particularly invested in sweeping abortion rights either.”

As of May 2018, Florida placed a number of restrictions on abortions. They are only covered under the Affordable Care Act if the woman’s life is endangered, or in cases of rape or incest. The parent of a minor must be notified before an abortion is provided. Public funding for abortions is only available in cases of life endangerment, rape or incest.

And regardless of when a woman seeks an abortion, she must undergo an ultrasound first, and the provider must offer her the option to view the image.

The heartbeat bill is currently in the Health Quality Subcommittee of the Florida House of Representatives. It has yet to be referred in the Senate.

Ron DeSantis, the newly elected Republican governor, has said he would sign the bill if it passes both chambers.

Katherine Campione is a reporter for WUFT News. She can be contacted by emailing krcampione@ufl.edu or 352-392-6397.
@katie_campione
Previous Feb. 19, 2019: Morning News in 90
Next Florida to Ban Dumping Blood Off Beaches to Lure Sharks

Feldman is the latest in a slew of early departures for the City of Gainesville.