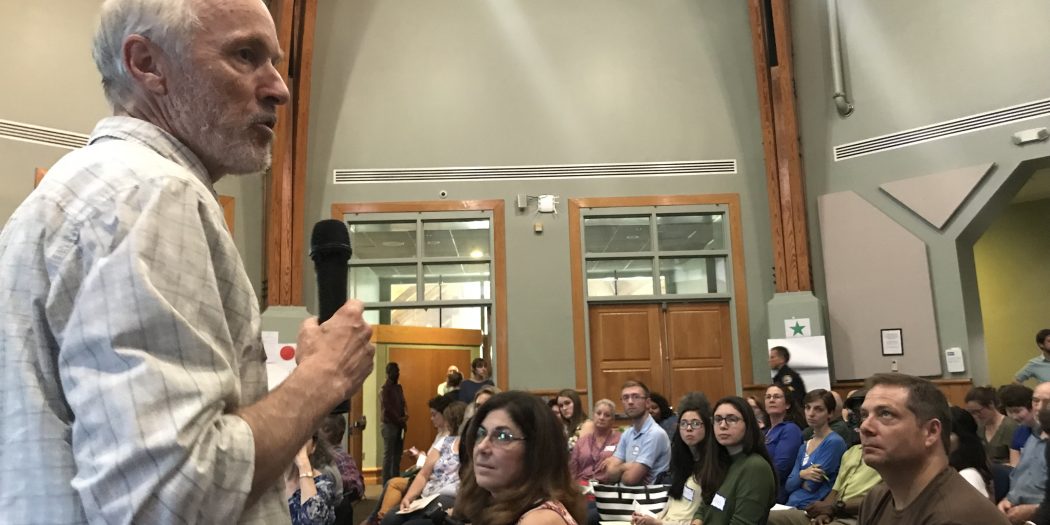 People bounced around ideas Tuesday night at the Alachua County Library Headquarters Branch, all intended to solve one of Gainesville’s most pressing problems — its widespread lack of food security.

The struggle to put food on the table is not new for many residents of Gainesville and its surrounding suburbs. Alachua County in 2016 had about one in five households reporting that they don’t have consistent access to affordable and nutritious food, according to the nonprofit Feeding America.

Even with food banks like Bread of the Mighty, 325 NW 10th Ave., providing resources to those who are suffering, food insecurity has not dissipated, said Marcia Conwell, the food bank’s chief executive officer. In the last year alone, the food bank gave away over more than 2.4 million pounds of food to its customers, and there were still homes in which people didn’t have enough to eat, she said.

Food insecurity, Conwell said, is rooted in the difficulty of trying to provide for others with wages that just aren’t livable in today’s society.

“People are working minimum wage jobs to support their families and have no money left for food afterward,” she said.

Harsh realities like these are what prompted around 80 citizens of Gainesville and its surrounding communities to attend the Tuesday night meeting dedicated to finding solutions to the problems Gainesville’s food system faces.

A lack of time for finding and preparing food , coupled with a lack of transportation for people trying to access food markets and grocery stores, were among the most prominent issues discussed at the forum.

David Reed, former director of the Alachua County Nutrition Alliance, proposed a possible solution for some of these obstacles.

“I would like to see an online distribution system that would help get the produce of local farmers to local buyers,” Reed said. “This system could distribute food to more rural areas to ensure people have better access to better food.”

Reed’s solutions were among dozens proposed to solve a variety of challenges in Gainesville’s food system. Those at the meeting offered so many ideas that the city’s biggest challenge may be trying to decide which to implement first.

Karissa Raskin, a civic collaboration specialist for the City of Gainesville, organized the meeting.

“I was thrilled at how engaged people were,” Raskin said. “When I struggled to get the room back together for the debriefing section, the fact that everyone was continuing to talk was a huge sign of success to me.”

Raskin plans to put the information generated at the meeting into a report, which she will submit to the City Commission at its March 14 general policy meeting. City officials then will review the report and decide what actions to take.

Raskin was encouraged by the turnout and hopes to see the enthusiasm continue in discussions of other community issues.

“I hope they take away new connections that they weren’t previously aware of but also leave energized to continue discussing these issues,” Raskin said.

Hayden is a reporter for WUFT News who can be reached by calling 217-552-7022 or at haydendodds@ufl.edu
@DoddsHayden
Previous Alachua Farmers Market Offers Another Option To Buy And Sell Fresh Local Produce
Next The Point, Feb. 13, 2019: About Those 13 Anti-Gun Violence Bills Now In The Florida Legislature