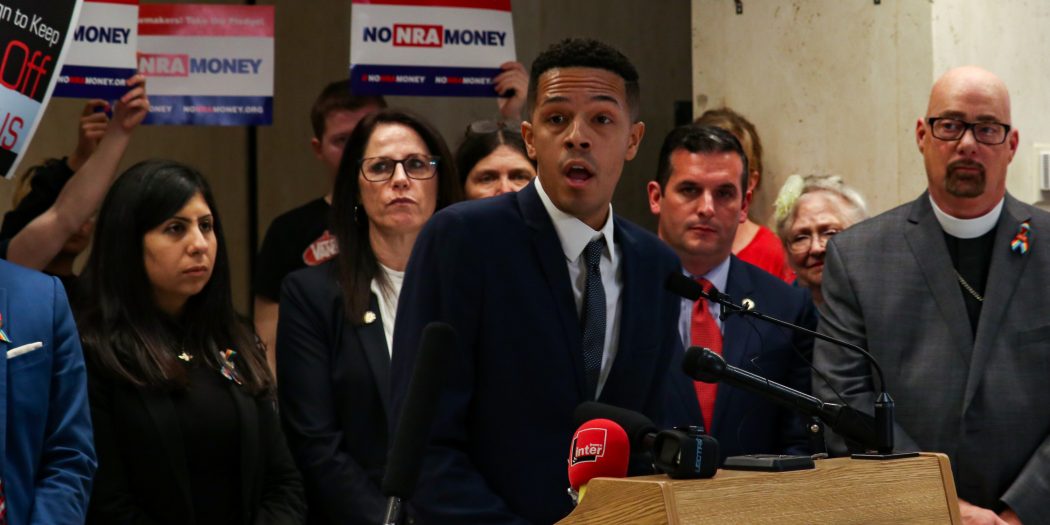 Caption: Activist Brandon Wolf calls for anti-gun violence legislation at a press conference at the capitol on Feb. 12, 2019. He recalled his experience as a survivor of the 2016 Pulse nightclub shooting in Orlando. (Cat Gloria/WUFT News)

Bold-lettered signs that read, “Stand up to the NRA”, “No NRA Money” and “Disarm Hate” floated above a crowd of Democratic legislators on the capitol’s fourth-floor rotunda on Tuesday.

In a gun violence prevention press conference, freshman legislators unveiled proposed gun legislation for the upcoming session. It was organized in part by Rep. Carlos Guillermo Smith, D-Orlando, and the Coalition to Prevent Gun Violence.

With a Republican majority in both chambers and a Republican governor, Democrats were facing long odds winning legislative approval for gun legislation. The sheer volume of their proposals – with at least 13 bills so far – indicated a Democratic strategy of asking for significant measures and negotiating backward.

House Democratic Leader Kionne McGhee said he supports flexible funding for the Guardian program, which allows non-instructional school personnel to be armed in case of an active shooter. Individual school districts should have the ability to design a safety program that works best for them, he said.Still, McGhee remained adamant that teachers should not be added to the list of people who can be armed under the Guardian program.

“I am 100 percent against arming teachers,” McGhee said.

After the conference, Senate President Bill Galvano released a statement saying the Senate Education Committee passed bill SB 7030, which would amend the process by which districts implement the Guardian program and would expand the program to allow teachers to participate. Galvano said the bill follows suggestions made by the Marjory Stoneman Douglas High School Public Safety Commission.

“One year ago this week, we made a commitment to the students and families of Parkland that we would do everything in our power to prevent such a tragedy from ever happening again,” Galvano said.

The proposed legislation must go through at least one more committee, as well as pass on the floor, to become law.

Rep. Anna Eskamani, D-Orlando, said she wants to require a person convicted of misdemeanor domestic violence to surrender all firearms and ammunition to police.

“Enough is enough,” said Eskamani, whose district includes the scene of the 2016 Pulse nightclub shooting that killed 49 people. “The lives of Floridians, especially women’s lives, are on the line and together we are going to keep fighting for their safety.”

A survivor of that nightclub shooting, Brandon Wolf, remembered crouching near a bathroom sink after he was shot.

“It’s been two years, and I still don’t sleep well at night,” Wolf said. “I still avoid crowded rooms, and I always look for the first exit.”

“You hear the shots at night, you hear them walking to school. And it needs to not be the norm,” she said. “We are not in a third-world country where there are rebels coming at you, and yet we have access to guns in that same way.

Here are the bills filed so far:

HB 135 and SB 654 – Sponsored by Rep. Margaret Good, D-Sarasota, and Sen. Lauren Book, D-Plantation, calls for criminal background checks on all gun purchases and requiring dealers to be licensed.

HB 655 and SB 712 – Sponsored by Rep. Shevrin Jones, D-West Park, and Sen. Janet Cruz, D-Tampa, doles out Guardian program funding to counties who chose not to participate as well as those in the program. The amount each county gets would be determined by how many students are enrolled.

HB 197 and SB 752 – Sponsored by Rep. Cindy Polo, D-Miramar, and Sen. Lori Berman, makes it illegal to openly carry a gun or concealed weapon into a childcare facility.

SB 764 – Sponsored by Sen. Lori Berman and Rep. Richard Stark, D-Weston, stops household or family members from leaving a gun in the house of someone who can’t legally own a gun.

SB 468 – Sponsored by Sen. Gary Farmer, among other changes, the bill would require all firearm sales or leases, even between private individuals, be conducted through a licensed firearm dealer. Most dealers charge an average of $40 in transfer fees per transaction.

Many representatives said they’re in the process of drafting bills and will file them in coming weeks.

Cat is a reporter for WUFT News and Fresh Take Florida who can be reached by calling 954-657-3385 or emailing cgloria@ufl.edu.
Previous Three Key Election Officials Have No Previous Election Experience
Next Alachua Farmers Market Offers Another Option To Buy And Sell Fresh Local Produce