Nearly 200 teams are in Gainesville Thursday for the 2019 Florida High School Competitive Cheerleading State Championships – the most ever, organizers said yesterday.

A total of 3,578 cheerleaders from 191 teams will compete in the two-day competition that runs through Friday at the Stephen C. O’Connell Center at the University of Florida, according to Kellie Doucette, director of athletics at the Florida High School Athletic Association.

“I do believe this is the greatest number of teams I have had at a state championship,” Doucette said.

Doucette said as far back as 2008 basically all teams made it to the state championships. For the 2014-15 season, however, FHSAA established “cut scores,” and teams had to have one of at least 60 to advance to the finals. Since then, more coaches have learned how to interpret the new score sheet, and also what judges are looking for in terms of techniques and stunts, Doucette said.

Oak Hall School in Gainesville, Newberry High School and Baker County High School are among the teams from North Central Florida competing in the state championships.

Cheerleaders and coaches from those schools expressed satisfaction in having their hard work pay off. They also sought to counter stereotypes that diminish the sport they love and cherish.

It is Oak Hall’s first time at the state finals; the team is in the medium non-tumbling division.

Kelley Thorp, the school’s head cheer coach, said her girls have worked tremendously hard this season in addition to being great students and members of their school community. Thorp said cheerleading teaches life skills and that her goal is her athletes is to be well-rounded.

Mason Johnson, a junior flyer at Oak Hall, said “being a part of this cheer team has been a 100 percent benefit throughout my high school career so far because of the greatest coaches and teammates I have the privilege to work with.” She added, “Cheerleading has made me a leader.”

Newberry will compete in the small non-tumbling division. Longtime coach TiAnn Stark said her team has made it to the finals every year since competitive cheer joined FHSAA as a sport.

Stark said her team has had to overcome including injuries and personal issues this season.

“Cheerleading is a sport where it’s like a puzzle,” she said. “You can’t just substitute a quarterback in. It’s not as easy as taking somebody and putting them in another spot.”

Its members said that being on the team gives them more confidence and better social skills.

“Before cheerleading I was more introverted, but cheerleading has brought me out of my comfort zone,” said senior flyer Baylee Boothby, 17.

Boothby also said the cheerleaders play a vital role at Newberry by being school ambassadors.

“When people think of Newberry, they think of our cheerleaders,” she said.

Baker County coach Kristian Kinney said cheerleading prepares people for being productive people in the workplace, and has made a major difference in each girl’s confidence.

“I have one girl who is night and day from her freshman year to now when she is a junior,” Kinney said. “It’s amazing to see how much she has opened up.”

Landon Boucher, 17, said he was among the many boys at his Newberry who looked down upon cheerleading before he became a senior back spot on the team.

“Now I disagree, because cheerleading does take a lot of work and strength,” Boucher said.

Kinney agreed: “Cheerleaders work just as hard as any other athlete, maybe even twice as hard. They have to throw other human beings in the air. If that’s not a sport, then I don’t know what is.”

Thorp said the Oak Hall team uses the criticism to its advantage.

“ We take it as a challenge,” she said. “It’s our fire and how we gain more respect.” 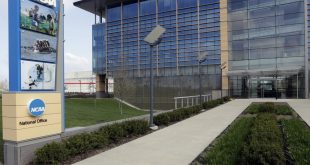