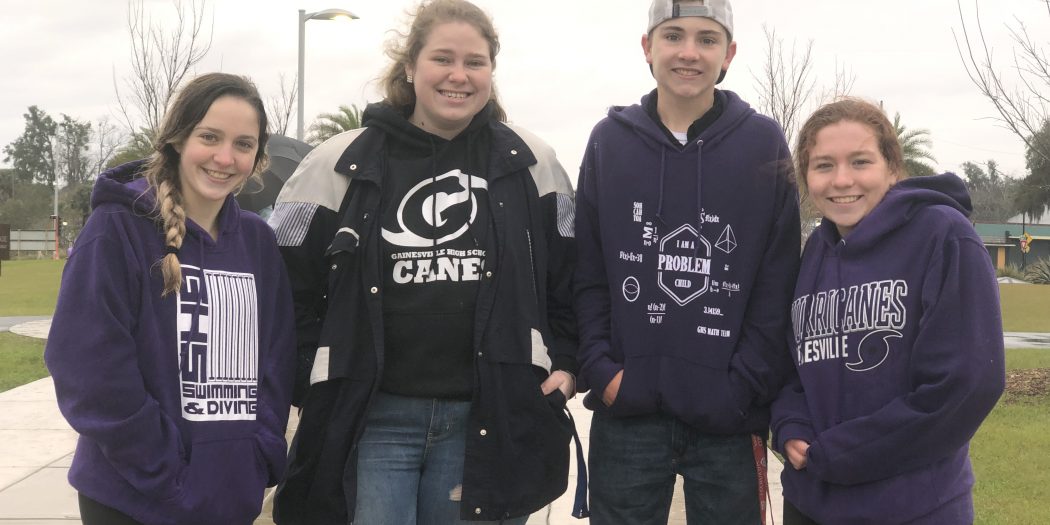 From left, Andie Kramer, Jessica Harry, Robbie Collins and Ashley Ray, of the Gainesville High School Student Government Association, helped plan the 5K that raised over $3,000 for the schools impacted by Hurricane Michael in the Panhandle. (Angel Ransby/WUFT News)

As 130 participants prepared to run a 5K Sunday morning in support of hurricane relief, the rain poured down as if to remind them of the wind and rain that ravaged the Florida Panhandle in October.

The Gainesville High School Student Government Association hosted the Category 5K at Depot Park to raise money for the public schools that were impacted by Hurricane Michael in the Panhandle.

Robbie Collins, junior student body president of GHS, said the Florida Association of Student Councils announced hurricane relief as this year’s fundraiser category, a choice spurred on by the half-dozen or so hurricanes that have hit Florida since 2016.

“We decided this was the best way to gather the money and donate it to the schools that have been suffering in the Panhandle,” Collins said.  “This is a school-sponsored event, and we want to give back to that school system.”

Andie Kramer, junior class senator at GHS, said the organization set a goal to have 150 participants in the race. The amount of tickets sold was just shy of that total. Still, Gainesville High School SGA was able to raise more than $4,000 for hurricane relief.

Bill Husfelt, superintendent of Bay District Schools, said the county is humbled by the amount of support that continues to come from around the state.

“Our entire community has been devastated by this storm and the rebuilding process is challenging and emotionally draining for everyone,” Husfelt said.

Michael damaged almost every district school to some extent, and many were severely impacted by the storm.

Everitt Middle School, Springfield Elementary School and Oscar Patterson Elementary School have been unable to reopen due to the extent of damage from the hurricane, Husfelt said. To accommodate for the delay, Everitt students are sharing a campus with Rutherford High School.

Springfield and Oscar Patterson Elementary may be closed for the 2019-2020 school year due to a massive loss of students since October, Husfelt said Thursday at a school board meeting.

Bay High School and Merritt Brown Middle School have reopened their campuses. The schools are reliant on modular buildings while reconstruction continues.

One of the main concerns of students and parents has been the challenge to find housing for their families.

Seventy-five percent of apartment complexes in the county are uninhabitable, Husfelt said, though Bay District Schools has helped employees find housing after the hurricane.

Donations have been used to provide students with school clothes and sporting equipment and replace personal items in teachers’ classrooms.

“I’m so proud of the way our community has come together to focus on rebuilding, and I know that we will overcome the many challenges we face,” Husfelt said.

Melissa Mauldin, activities director at Gainesville High School, said students will communicate with the superintendent to discuss the money raised from the 5K and determine where it will be best put to use.

Gainesville High School’s SGA contributed $200 to the hurricane relief along with equipment for the event. In addition, organization’s Powderbuff volleyball tournament at the school also helped raise funds.

The student government members selected Depot Park’s most cost-effective route for the 5K, Mauldin said. By tasking participants to run four laps around the Depot Park pond, the students eliminated additional expenses that the organization would need to pay for permits to use streets during the race.

More than 11 sponsors, along with the University of Florida and University of Central Florida chapters of the Fellowship of Christian Athletes and the GHS National Honor Society, contributed to the 5K through donations ranging from money to equipment, Mauldin said.

Soup to Nuts administered a food truck at the event and a portion of the sales will be added to the hurricane relief fund.

“We wanted to make an impact, but we weren’t sure how we were going to do it,” Jessica Harry, senior class president of GHS said. “But a 5K kind of brings the community together.”

“It’s hard to imagine if we were displaced from our school,” Harry said. “Whole counties have been displaced, and if a county was as big as ours, it would be crazy. I couldn’t even imagine.”

Harry said the organization set a longevity goal, hoping to continue to host an annual 5K to raise money for more causes in the future.

Story updated: A previous version of this story and its headline stated the fundraising total as $3,000. After publication, the total is now more than $4,000.

Angel is a reporter for WUFT News who can be reached by emailing news@wuft.org or calling 352-392-6397.
Previous January 25, 2019: Afternoon News In 90
Next The Point, Jan. 28, 2019: Gainesville High School Students Raise Money For Bay County Schools