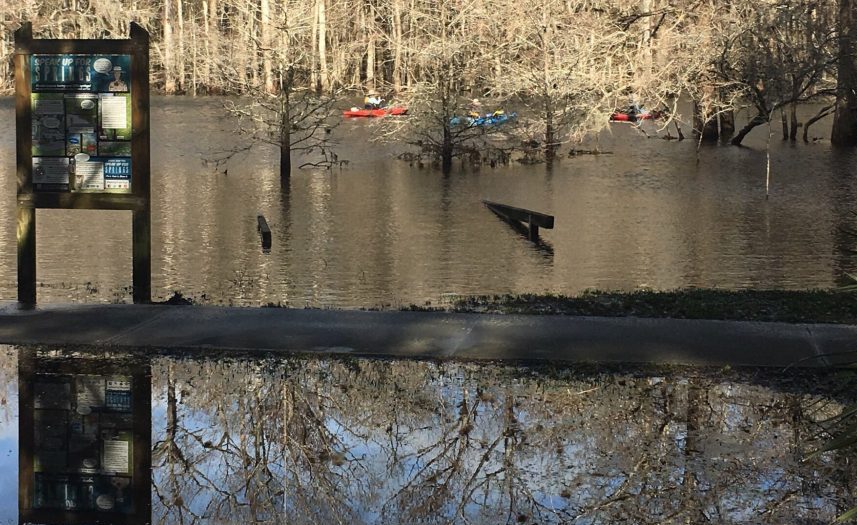 Instead of swimming at Manatee Springs State Park, guests are still enjoying the area with other activities like canoeing, cycling, walking their dogs and hiking through the forest. However, hiking on the boardwalks is off limits due to the high water. (Kyle Fansler/WUFT News)

Heavy rains and flooding have resulted in what state park officials are calling a “brown out” and the closure of the swimming area at Manatee Springs State Park near Chiefland.

Other springs along the Suwannee River, including Lafayette Blue Springs State Park, are experiencing the same issue.

A brown out is a natural occurrence when heavy rain causes the water levels to rise and overflow back into a spring, preventing it from filtering the water. The brown out does not cause any harm itself. Instead, it makes the water murky and can hide rocks or tree stumps that can injure people.

The enhanced flooding and murkiness of the water led park officials this week to close Manatee Springs’ main swimming area, but it’s still open to canoes and boats for those who want to see manatees.

One of these visitors is Mary Beck, a retiree visiting from Fort Collins, Colo. Her first visit to the park was to see manatees in water she thought would be clear.

“That is one of the reasons we came here — to see the manatees — but I hope this brown water won’t affect that too much,” she said.

Tim Fason, a concession worker at Manatee Springs State Park, said the spring is responsible for filtering and clarifying a large amount of water in the Suwannee River.

“The spring here puts out, on average, about 120 million gallons a day,” he said.

The brown out has no effect on the health of manatees near the spring, but instead invites the manatees by providing them with a new outlet of food.

“They got to access a lot of vegetation they normally can’t get to,” Fason said. With the river being up this high, the manatees were all in the grass here and up along the boardwalk area.”

Until the water levels recede, the swimming area and extensive system of boardwalks will remained closed to the public who wish to explore Manatee Springs State Park.

Kyle is a reporter for WUFT News who can be reached by emailing news@wuft.org or calling 352-392-6397.
Previous Jan. 24, 2019: Morning News in 90
Next Florida Elections Chief Resigns When Blackface Photos Emerge