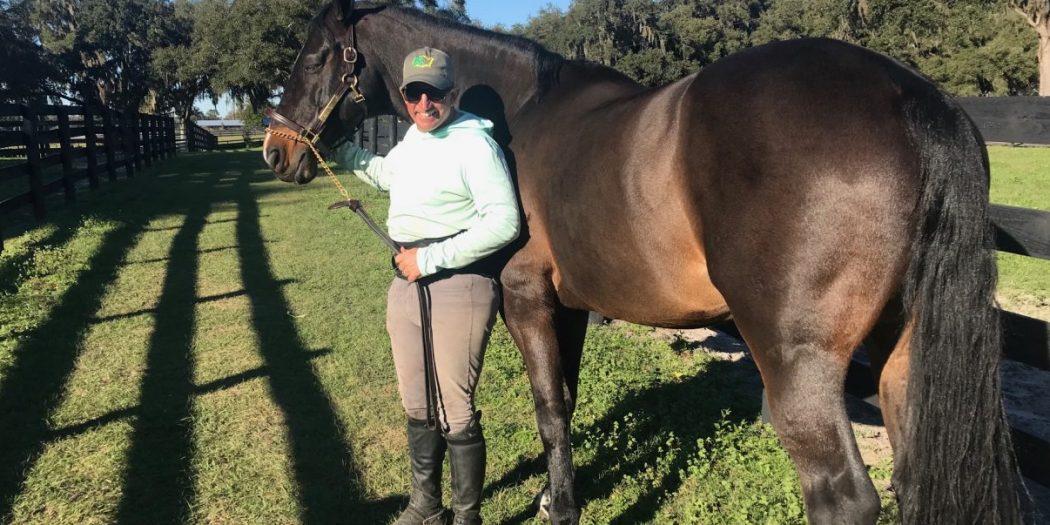 Aaron Vale with his competition horse, Finou 4, at his farm and training center in Williston. Vale adheres to the author Malcolm Gladwell’s “10,000 Hour Rule” that posits that practice is the only way to truly gain expertise. (Anthony Nicotera/WUFT News)

Horses In The Sun Kicks Off Season In Ocala

Central Florida’s premier equestrian event kicked off Tuesday as riders from around the world convened in Ocala for 10 weeks of competition.

The circuit will have both ‘hunter’ and ‘jumper’ events. Hunter events involve a rider and his or her horse jumping eight fences while being judged largely on the basis of their style, movement and manners. In jumper events, riders attempt to complete the course in the shortest period of time. The fastest clean round wins.

Thomas Struzzieri, president and CEO of HITS, believes that an eclectic group of shows means there’s something for everyone. Aside from the standard hunter/jumper events, there will also be team events and children’s shows.

“You may stumble across a ring where a child is there for their first time at their first horse show,” Struzzieri said. “Several rings down, you’ll find someone like three-time Olympic medalist McLain Ward riding for a $1 million purse.”

HITS, based in upstate New York, produces hunter/jumper shows throughout the United States. The company produced its first horse show circuit in Gainesville in 1982. It brought the show to Ocala three years later.

Struzzieri said one of the biggest assets of the Ocala Winter Circuit is undoubtedly the weather.

“The winter in Florida is the place to be,” Struzzieri said. “People have found that they love Central Florida so much that a lot of our clients now own their own properties there and are spending more and more time there.”

One such settler is Texas native Aaron Vale, 50, who started competing in shows when he was eight years old and hasn’t looked back since.

“I never thought of doing anything else,” he said.

Vale has over 200 Grand Prix wins in his illustrious career in competitions throughout the United States and Europe.

Vale has managed his own stable of horses and trained new riders on a 72-acre farm in Williston for the past five years. The weather and the culture of horseback riding in the region drew Vale and his family to Central Florida.

The winter circuit has a sizeable economic impact on Marion County. A 2014 economic impact analysis projected the event creates upwards of $94 million in revenue for the county.

Struzzieri explained that show jumping is a business that must evolve like any other industry.

He has seen the sport become more “weekend-oriented” over the past few years. Many riders now prefer to stay for a couple days instead of the traditional five.

Katelyn Lamb, an administrative assistant for HITS, said there are many more riders and spectators for the Ocala circuit’s weekend events than on weekdays.

“Everybody in America is busier now,” Struzzieri said. “Consolidating your time at one event seems to make the most sense.”

“We certainly see more of an uptick in our weekend hotel occupancy during the show season,” Locke said. “This is in large part to HITS’ staff, competitors, attendees and trainers.”

For many competitors, this event is the first chance of the new year to go head-to-head against riders from around the country and the world.

Vale says the ability to consistently improve is the reason he remains so passionate about the sport.

“You’re never gonna quite get it, but it’s the desire to find perfection that makes it fun,” Vale said.

There is no admission charge for performances Wednesday through Saturday. Admission to Sunday events is five dollars. Shows begin at 8:00 a.m and finish between 3:00 and 5:30 p.m. HITS Post Time Farm is located in Ocala at 13710 Old Blitchton Road.

Anthony Nicotera is a reporter for WUFT News and can be reached at 352-392-6397 or anicotera1@gmail.com.
Previous What Florida’s Representatives In Congress Are Saying About The Government Shutdown
Next Jan. 17, 2019: Morning News In 90

Plenty of Pit Bulls, a Gainesville nonprofit organization that specializes in placing at-risk shelter dogs in foster care, is looking for volunteers to provide homes for its rescued dogs. The group is hosting a fundraising event Oct. 2 from 2 p.m. to 6 p.m. at First Magnitude Brewing Co., located at 1220 SE Veitch St. All proceeds go toward the dogs’ medical care and other needs.