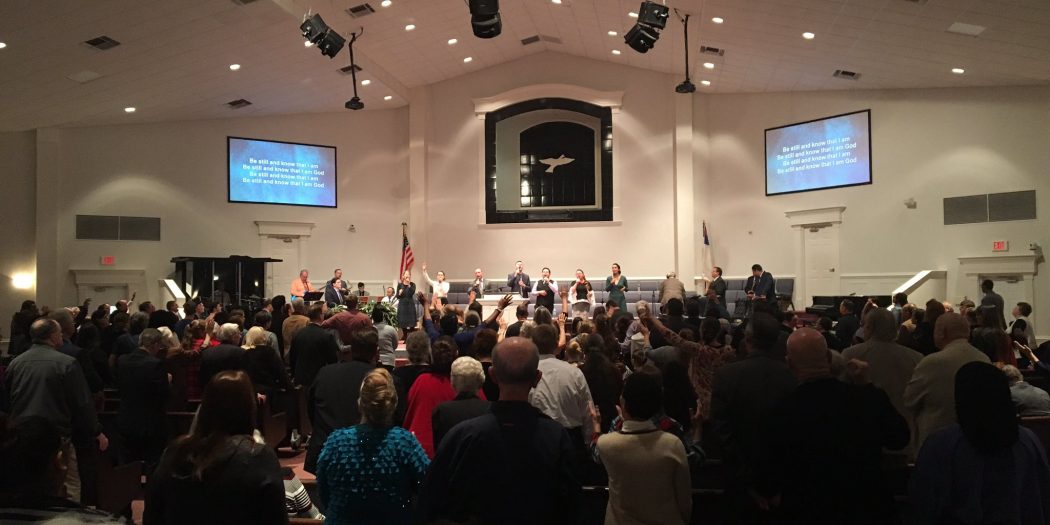 Update, Jan. 7 at 8:13 a.m.: It was unlike any usual service at Pentecostals of Gainesville on Sunday night, as the church welcomed some visitors from out of state.

It was also unlike any usual visiting pastor who would call Gainesville “the best place” for a tragedy to happen to his life.

Marksville pastor Eric Descant lost two family members last week when they were on a trip to Disney World.

“I cried so much this morning,” Descant said during the vigil, “My tears felt like lava flowing out of a volcano.”

He learned most of the victims in Thursday’s Interstate 75 crash were members of his church, the Avoyelles House of Mercy Pentecostal church in Marksville, La.

Nevertheless, Descant’s story doesn’t end with an eruption of sorrows, but with an outpouring of love from his unexpected stop in Gainesville.

Descant said he’s most thankful to, first and foremost, the person who introduced him to the stage– Gainesville pastor Jimmy Toney. Toney and his church have been providing foods, hotel rooms and other needs to the victims and their families.

Not only did they organize the vigil service called “A Night of Hope and Healing,” Pentecostals of Gainesville said it will pay for the funerals of the five children killed in the crash.

“I want to thank each of you for your expression of love and concern and sympathy. It has been a great comfort to these great people,” Toney said, “This week, in the midst of the worst of time, we have seen the best in people.”

Police officers, firefighters, and nurses were also honored for their efforts in saving the victims.

Pentecostals of Gainesville church member Myrna Mason was driving on I-75 when she heard reports of the “horrific” crash on the radio. She said she attended the vigil to show support for the victims and their families.

“I suppose they are in a better place…They probably spent a lot of time raising money to get there (Disney World)… It’s just very sad,” Mason said, choking up as she shared her response to the incident.

Those who attended the vigil on this night cheered for the man who said he’s saved by his faith.

“As I woke up this morning, just so many things started to fill my mind and my heart. Pastor Toney called me and prayed for me,” Descant took a deep breath and continued, “God is good.”

Three GoFundMe accounts have been created to help families of the children:

The truck driver at the center of a fiery Florida crash that killed him, another trucker and five children received several traffic tickets over the years.

Court records show 59-year-old Steve Holland of West Palm Beach was ticketed between 2000 and 2014 in Florida, Pennsylvania, Ohio, Indiana and Virginia for violations including speeding, driving an unsafe vehicle, driving an overloaded vehicle and not carrying proof of insurance.

The highway patrol said Friday that Holland was traveling north on Interstate 75 near Gainesville on Thursday when he veered into another car, lost control and went through the center divider, striking a southbound church van from Louisiana and another truck. Five children from ages 9 to 14 in the van died.

The five children killed in a fiery Florida highway crash on their way to Walt Disney World have been identified along with the two truck drivers who also died.

The Florida Highway Patrol said Friday that the children were 14-year-olds Joel Cloud and Jeremiah Warren, 13-year-old Cara Descant, 10-year-old Briena Descant, and 9-year-old Cierra Bordelan. All were from Marksville, Louisiana, and were in a Pentecostal church van headed to the theme park when the accident happened Thursday afternoon outside Gainesville.

The van was an hour north of the theme park when Holland’s tractor-trailer heading in the opposite direction on Interstate 75 collided with a car and both burst through the center divider. The van and Bolkema’s truck collided with the semi and the car and burst into flames.

Update, Jan. 4 at 3:30 p.m.: The head of the Louisiana District of the United Pentecostal Church International has issued a statement on Thursday’s crash. It was the church’s van that was headed to Disney World with 12 people inside when it crashed.

Louisiana District Superintendent Kevin Cox said three women were in the van that was involved in Thursday’s crash, along with nine children, five of whom died. The three women and four other children are all recovering at hospitals from their injuries.

“Please pray for the healing of those physical injuries,” Cox wrote. “And, perhaps even more so, pray for the church and families that have been so massively affected by this tragedy.”

Original story, Jan. 4 at 1:27 p.m.: Part of Interstate 75 southbound is still shut down after a fiery crash on Thursday afternoon killed seven people north of Gainesville.

FHP confirmed seven people are dead. Five were children, and the other two were the tractor-trailer drivers. Officials said they aren’t sure yet what caused one of the trucks and passenger car to collide as they headed north on the interstate, but FHP Lt. Patrick Riordan said that’s what started the incident.

“The truck and passenger car that was traveling north collided and subsequently went through the guardrail, traveling into the southbound lanes,” he said.

In the southbound lanes, those two vehicles hit a van full of children destined for Disney World, as well as another tractor-trailer truck. The two trucks caught fire, and both of their drivers were killed.

The National Transportation Safety Board is not assisting with the investigation at the moment due to the government shutdown, though FHP has reported it to them. Riordan said FHP is still following its normal protocols.

“It’s not going to change the fact of what we do day in and day out under very difficult circumstances,” he said.

The investigation by FHP and the Florida Department of Transportation is still ongoing. FDOT is closing two lanes Friday night to repair asphalt near the site of the crash.

Officials don’t expect to re-open the rest of that portion of I-75 until Saturday due to weather.

FDOT anticipates conducting repairs, weather permitting, to the damaged asphalt on I-75 in Alachua County as a result of the crash on Thursday. Currently two SB travel lanes are open. Motorists should expect one lane of SB travel tonight while repairs are conducted. pic.twitter.com/9Mqq7M8Hgi

They said this is likely the deadliest accident in the county since 2012, when 10 people were killed on I-75 near Paynes Prairie.