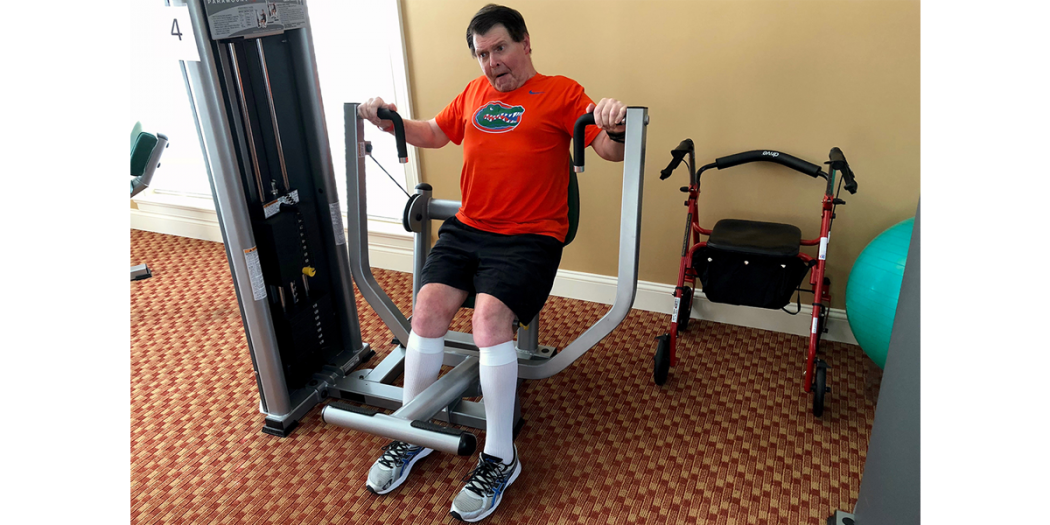 Cerebral Palsy Doesn’t Stop Gainesville Man From Helping, Inspiring Those Around Him

Faye Bauman remembers needing a prescription filled late one night in 2015, but she was then too new to Gainesville to find her way to the closest 24-hour pharmacy.

She’s also a senior citizen who hates driving when it’s dark. So she knocked on a neighbor’s door and asked for help.

The neighbor, Jeff Suggs, couldn’t drive Bauman where she needed to go. He has cerebral palsy.

But Suggs never hesitated. He just said, “Of course.” He comforted her, kept her company in her car and provided directions.

“I do not know the meaning of no,” Suggs, 63, said recently from his home at The Village, a senior living community across from Santa Fe College. “I always say yes if I can help people. I feel I was put here on this Earth to help anyone I can.”

Suggs is one of the youngest residents at The Village and by all accounts one of the kindest. Cerebral palsy has degraded his abilities to talk and walk since age 5, but never seems to impair his positive spirit and persistence to brighten someone else’s day.

Bauman, 81, moved to The Village to live near the doctor treating her macular degeneration, or vision loss. Her first six months there were hard, spent mostly on Suggs’ couch, crying.

Suggs always puts others at The Village before himself. He has never missed someone’s birthday and wishes all of his friends happy holidays. He loves to shout “I love you, Faye Bauman” whenever he sees her. When her face reddens, he does it again – louder.

His family moved to Florida about six months after he was born in Ohio. He worked in inventory control at an insurance company in Jacksonville for 17 years. Back then he could walk – and even compete in bodybuilding competitions.

In 1994, Suggs moved to Gainesville, and nine years later to The Village with his mom. When she died in 2009, he learned how to live on his own. He relies on a walker, but volunteers at the convenience store in his apartment building every week. He also goes to the gym at the complex’s community center regularly, lifting 100 pounds on weight machines.

Misty Pass, 43, the fitness coordinator, said Suggs is always smiling. He teaches people how to lift weights and encourages them – often becoming their personal cheerleader.

“Sometimes we tell him to cut back on the weights, but he tells us no,” Pass said. “He says ‘No pain. No gain.’”

Suggs also enjoys greeting resident life staff as he passes by them in the hallways. He remembers how each member usually looks and what he’s talked to them about. Whenever Paula Bowlan, 66, a program coordinator, doesn’t wear heels to work, he teases her.

“He notices every day,” Bowlan said.

Kristen Ayers, 31, another coordinator, also likes when Suggs stops by their office.

“He taught me to make people feel special,” she said.