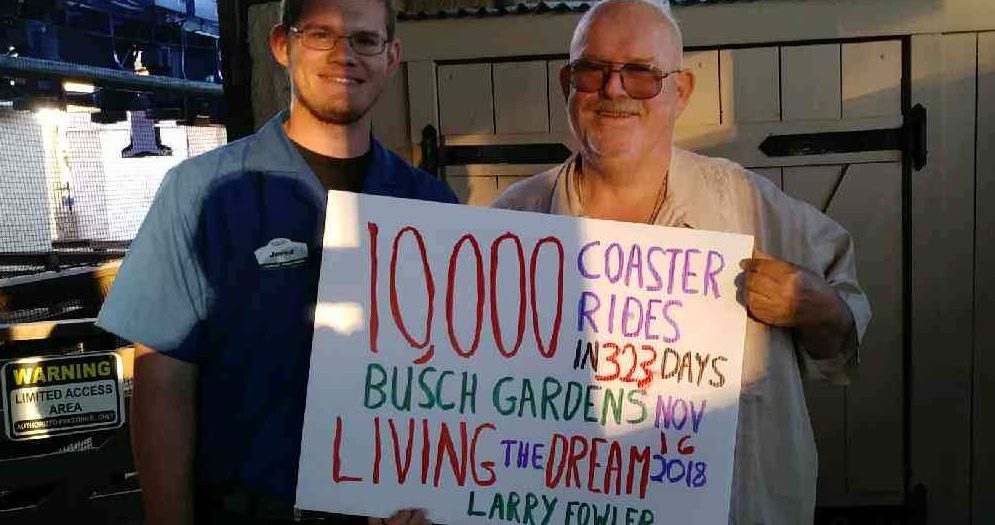 A woman’s voice crackles through the PA system at Busch Gardens Tampa Bay.

There’s no time for niceties. Buckles click. Thumbs up. Go.

We hiss into motion. The coaster snakes its first corner. We leave his faded Trump hat on the seat of his Jazzy Power Chair which we left parked, guarding the handicapped entrance.

Empty, besides the two of us seated in row four, the 32-seat train crawls 150-feet straight up into the morning sky. We peel over the top.

Larry has a system. He keeps count of the run at four check points: beginning, first drop, halfway, end.

“One,” he says. We overlook the park’s lonely parking lot below.

We hang – breathless. And then we drop. Gravity wins. Larry’s blue-and-silver U.S. Navy ring threatens to fly off his left hand; his right forefinger still holds firm. We spin, jive, jump and twist.

The wind swallows my screams. The coaster brakes halfway. Larry says “Look right.” The coaster tumbles forward. A wonderland of looping track unfolds to my right. And we stop.

My shoulders rebound off the harness. But, Larry doesn’t budge; his large frame pressed tight against the “big-boy seat,” made to accommodate larger riders.

Giddy, he says, “That was my first espresso shot of the day.”

And it was – the first. The first of many, many more. The train inches back into the station. Buckles re-click. Thumbs up. Go. This time, Larry adds another finger.

Most weekday mornings Larry replaces his morning cup of joe with the adrenaline rush of a wild roller coaster ride. Or two. Or maybe even 60.

Mondays, Tuesdays, Thursdays and Fridays, Larry makes the trek from his home in Winter Haven to arrive nearly two hours before opening at the gates of Busch Gardens Tampa Bay. Usually the first visitor admitted – and the last to leave – Larry averages 60 roller coaster rides a day. His goal: to hit 10,000 coaster rides by Dec. 31. His only reason is to achieve what no one else has.

Recognized as a park regular, or “the crazy coaster guy,” a few months in, Larry, became Busch Garden’s “unofficial official” mascot within a few months. He’s the stray cat that keeps coming back.

“Eventually they had to adopt me.”

But as a Tampa native myself, growing up on family annual park passes and theme-park drumsticks, I had my doubts. I was curious. So, I tagged along for a day at the park with Larry.

I learned all about Larry’s peculiar passion through mid-coaster conversations – with craned necks and dangling feet – and while talking between rides .  And after 8 hours in the park, I discovered a lot about the man who was buckled in behind the coaster as well.

“You either fizzle out or you burn out,” he said. “I’m gonna burn out.”

At the start of our day, I met Larry outside a Starbucks on East Fowler Avenue around the corner from the Tampa’s Veterans Affairs Hospital where he is occasionally treated for knee pain. His weight takes a toll on his joints. Weighing 344 lbs. at his heaviest, he has struggled to manage it post-retirement. I ditch my car outside the java joint to join him in his.

We pulled up outside the theme park gates at 8:14 a.m. Other cars trickled in around 8:45 a.m. But, the park won’t open for another hour.

Larry waved through his window to a man he nicknamed “Speedy Gonzalez.” Most days, Speedy beats him inside the park after he beelines through the lot, driving outside the lines. He’s also a veteran, of the country and the park. Larry says the regulars recognize each other quickly.

Parked and through security by 10 a.m. sharp, I trail behind Larry’s high-speed motor chair. Stay right, he said. His chair is accessorized with Bush Gardens paraphernalia like a park poncho and refillable “Cobra’s Curse” rewards cup.

We head east through the streets of Morocco. Busch Gardens, an Africa-inspired theme park, is mapped into a handful of regions.

Larry’s favorite coaster and first run of the day, Montu, looms above the heart of Egypt – it’s twisted tracks named after the country’s mythological god of war.  I walked, Larry rolled up the exit ramp.

“Montu is my baby – the perfect coaster.”

I waver as we exit, dizzy from what felt like dozens of rides. I’ve lost count. But, Larry hasn’t. He texts himself “Montu: 6” to keep track and lets his fingers fall.

His personal record for the ride – 85 runs in a single day.

We take a shortcut through the Serengeti Plain to reach the Congo.

In true Forrest Gump style, Larry recalls the best nuggets of his life in vibrant color. It’s a decent walk to our next coaster, but it’s quicker than backtracking through the streets of Nairobi.

Larry – the peanut salesman, cab driver, Navy officer and San Diego mail man –has encountered loss, love and change in his 67 years. But his wonderment for life has endured through it all.

Resilient as he is clever, Larry has never done anything halfway. Whether it’s selling peanuts for a dime a pack, hauling boxes at Bill’s Curb Market, or delivering mail up the steep driveways of San Diego, California – Larry is all in.

We approach Kumba – the oldest coaster in the park. It’s still running strong.

An employee waves us on board. Kumba means “roar” in English, he says. Buckles click. Now deep in the afternoon, the coaster’s outer metal body stings with Florida’s heat.

“It’s so hot out here, the chickens are laying fried eggs,” he says.

I laugh, but I’m exhausted – fading quickly in comparison to Larry who is eager for more.

A line begins to form after only two runs, so we exit. Usually, Larry would have completed over 30 runs by 2 p.m. Our current count was only seven.

I decide to rally for one last coaster, feeling guilty for holding back his numbers. We venture southwest through the Congo toward Stanleyville, home to SheiKra, the 200-foot coaster that dives nearly 90 degrees straight down.

This time, a handicapped elevator deposits us to the front of the line. We scavengefor shade alongside a family on vacation from Europe.

“If you ride coasters, you’re alright with me,” he says.

He says the delay should only be 15 minutes. In the meantime, he shared his current statistics: 7,800 miles of coaster track this year alone.

Enthralled, they ask questions in thick Scottish accents. A quick half an hour later, we take front row seats alongside our new friends. There we sat: Mom, Dad, two kids, Larry and me.

The dad, bearded and tattooed, asks Larry what new record he will break in 2019. For the first time all day, Larry pauses.

He shrugs, then smiles. That’s not a question for today to answer. Today, he is here.

We raise up our fingers, and in unison we say: One.

Gabriella Paul is a reporter for WUFT. She can be reached at gabbympaul@ufl.edu.
Previous FWC: Suspects Used Dogs To Attack Florida Black Bears
Next St. Michael’s Episcopal Church Torn Down Ahead Of Meeting That Might Have Preserved It