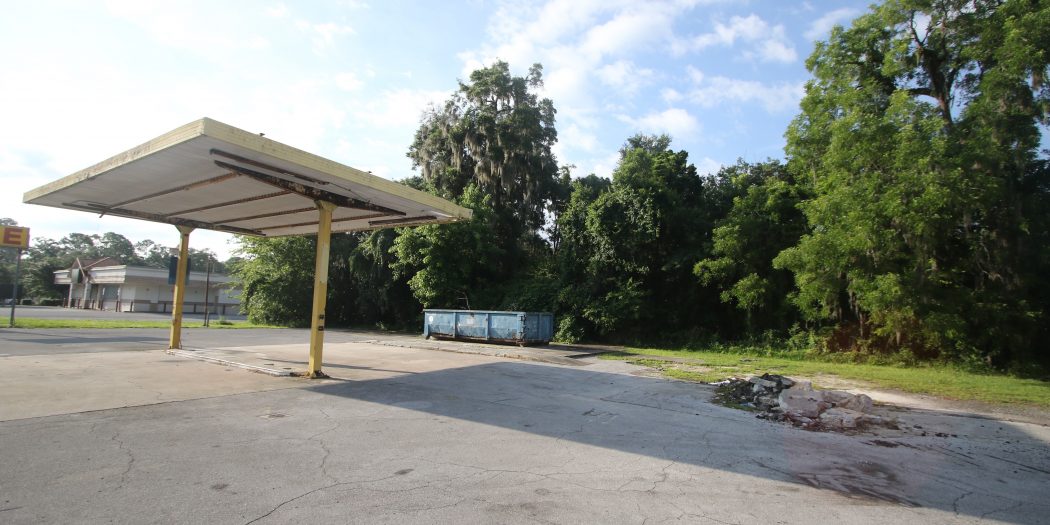 This is one of the petroleum-polluted sites that will be cleaned and remade into the Eastside Wawa. It was found to be contaminated in 1987. (WUFT News file photo)

Gainesville is moving forward with the cleanup of a petroleum-contaminated site in town.

Thursday night’s City Commission meeting marked the second hearing of a resolution that will turn a vacant lot into a designated brownfield site. A brownfield is a property that may face complications with reuse, redevelopment or expansion because of potential contaminants.

The vacant property at 1007 and 1021 E. University Ave. and 15 SE 10th St., owned by BW University and 10th LLC, will become a new Wawa gas station. These three pieces of land were formerly an ABC Fine Wine and Spirits store, a gas station and a single-family home.

All three locations will be the new eastside Wawa location, which will have 12 gas stations outside of the 5,500-square-foot convenience and food store, according to city documents.

Andrew Persons, a planner in the Department of Doing, said at the Nov. 15 meeting that the former gas station on the land is the reason the site needs to be rehabilitated. The Florida Department of Environmental Protection identified that these pieces of land had contamination in 1987.

The 1.65 acres of property are an addition to two other designated brownfield sites in Gainesville: Depot Park and University Corners. Persons said 4,000 tons of petroleum-contaminated soil will be removed from the site. Then, 8,800 pounds of chemicals will be applied to the remaining soil.

Michael Goldstein of The Goldstein Environmental Law Firm located in Coral Gables said that the criteria to achieve the brownfield designation were rigorous but that he and the property owner were able to meet them. Goldstein said that the property has significant real estate value, but it is currently a detriment to the community’s health and economy.

“The Florida brownfields program is a wonderful way for local governments, communities, developers and providers of capital to collaborate on really scary sites because that’s what this is,” Goldstein said. “If you take three steps back, this is a site that has significant decades-long history of contamination.”

The Brownfields Program goals are to create tax incentives and financial opportunities so that the cleanup of contaminated sites is facilitated; Goldstein said there are thousands of them in the state.

Most of the contaminated piece of land don’t receive the necessary funding to be cleaned, Goldstein said. They then deteriorate for decades. If the developer hadn’t requested the land become a brownfield designation, Goldstein said the water and soil would have likely remained toxic for years to come.

The process for the brownfield designation began in September after the property owner requested the cleanup. In October, public notices appeared in the Gainesville Sun, signs were hung at the site and a community meeting was held for residents to give their input.

At-Large Commissioner Helen Warren said the issue goes beyond cleaning up one polluted site because there are still thousands of them across the state that the government hasn’t fixed.

“With our aquifers, as precious as they are here, I’m really concerned that we don’t have more ways to be proactive in getting those cleanups done,” Warren said.