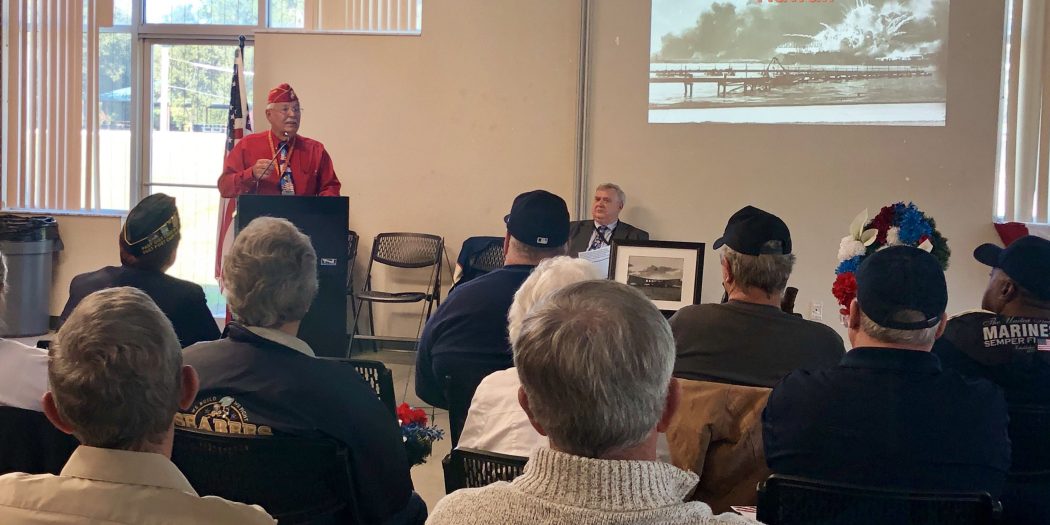 Jim Yakubsin speaks Friday at a gathering in remembrance of the attack on Pearl Harbor. (Giovanna Kubota/WUFT News)

U.S. Marine Corps veteran Jim Yakubsin recalled Friday the words his father said to him about the morning that Pearl Harbor was attacked on Dec. 7, 1941.

“’Everybody else got wounded. Why not me? I was right next to somebody,’” Yakubsin recalled his father saying just once, after he himself returned from Vietnam.

Yakubsin served as the featured speaker for the annual Pearl Harbor memorial ceremony held in the Freedom Center at Veterans Memorial Park in Gainesville.

More than 2,400 lives were lost when Japan bombed Pearl Harbor and drew the U.S. into World War II. About 50 people, most of whom were relatives of soldiers who served in the same year Pearl Harbor was attacked, attended the ceremony.

Alachua County Veteran Services hosted the event in honor of Dick Davis, a former commander of the Korean War, who died at 85 in 2015. After moving to Gainesville in 1966, Davis supported the veterans living in the county for many years. He also served from 1966-74 as a basketball assistant coach at the University of Florida.

“He was one of the advocates for us not to forget Pearl Harbor,” Alachua County Veteran Services Director Kim Davis said. “We are here to educate as well as to commemorate.”

James Huttl served in the Navy for eight years and was moved by the ceremony.

“It´s a remembrance of people that gave their lives for our country,” Huttl said.

Davis spoke of the courage that so many young people exhibited during Pearl Harbor and why it matters that a memorial service is held for Pearl Harbor each year.

“Each and every person in there had a story, just like Jim’s father,” she said.

Davis also noted why people should honor those who serve the country as servicemen.

“If you are afraid and still do it, that´s courage,” she said.

Giovanna is a reporter for WUFT News who can be reached by calling 352-392-6397 or emailing news@wuft.org.
Previous In The Villages, Home To Thousands Of Golf Carts, Golf Cart Seat Belts Are Rare
Next Unvarnished: Seeing Warmth On A Cold Holiday