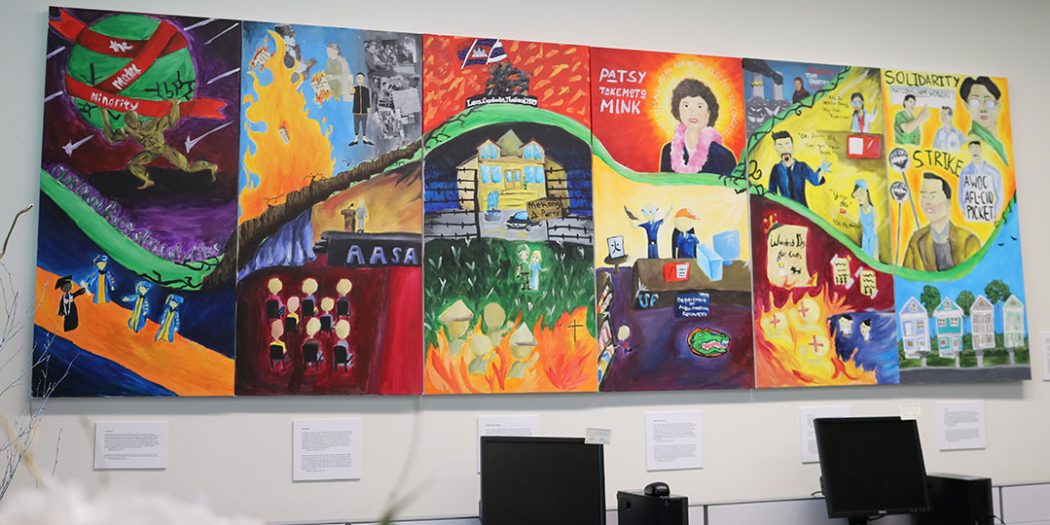 More than 40 guests welcomed the new artwork that depicts Asian-American historical scenes related to both national and local events.

According to Jack Nguyen, director of APIA Affairs, each panel corresponds to a theme such as academics, gatherings, histories, professional presence, stereotypes and solidarity.

Work on the mural began in summer and will be displayed in the APIA office, inside the Multicultural and Diversity department.

“We wanted to make sure we have things in the space that were, one, created by the students,” he said, “but also be reflective of the histories of UF as well.”

He said before he came to APIA, the office had posters donated by the Smithsonian Museum. He said that although the posters depicted Asian-American history, it was not comprehensive. He said there was a lot of experiences that were omitted and others that were highlighted.

The new mural depicts both positive and negative historical events, such as the first group of Asian students who graduated from UF in 1944.

Danny Khor, a second-year marine science student, was one of the students that worked on the mural. For their part of the mural, they focused on Patsy Takemoto Mink, the first Asian-American woman and woman of color voted into congress.

Gabrielle is a reporter for WUFT News who can be reached by calling 352-392-6397 or emailing news@wuft.org.
Previous GRACE Marketplace To Get Crosswalk To Bus Stop
Next Future Gainesville Wawa Location Is One Of Three Designated Brownfield Sites