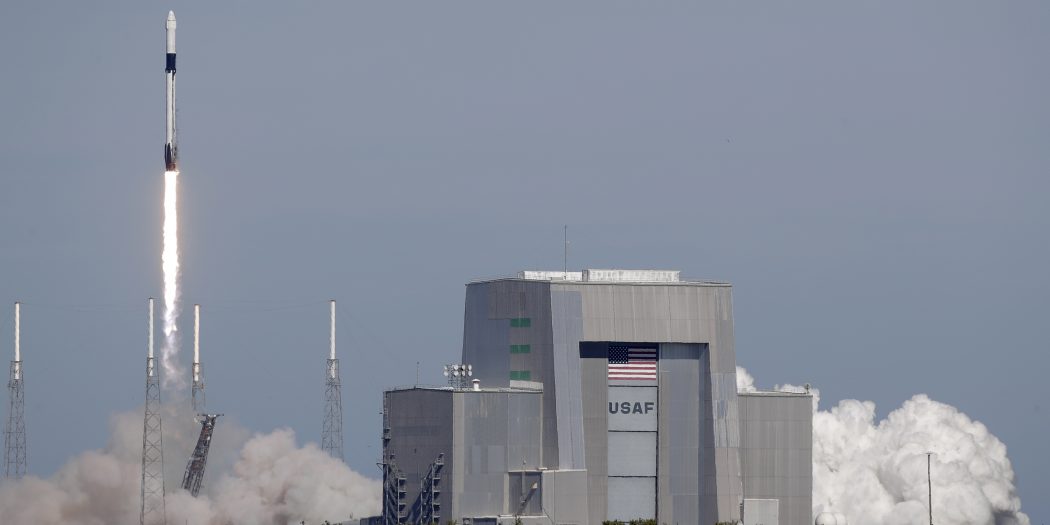 Shooting off from a giant cloud of smoke, a blinding streak of bright orange fire trailing behind, SpaceX’s Falcon 9 rocket, named for Han Solo’s Millennium Falcon, propelled the Dragon capsule towards the International Space Station Wednesday from Cape Canaveral.

The rocket’s name was not the only evidence of affection for Star Wars on this resupply mission. Among the cargo was the Global Ecosystem Dynamics Investigation sensor, or GEDI, (pronounced like those Jedi), with the tag line “May the forest be with you.” GEDI’s mission is to map Earth’s forests using light detection and ranging, or lidar, by sending millions of lasers to Earth. These lasers will bounce off trees, shrubs, and other vegetation and return to the sensor aboard the space station, producing the first three dimensional mapping of earth’s temperate and tropical forests.

Hank Margolis, Program Manager for Terrestrial Ecology in the Earth Science division of NASA’s Science Mission Directorate said the data collected by GEDI are imperative to understanding forests on a global basis. The mission will add information to classic sensors like the Landsat observation satellite program , because, while those may tell you the “area of forest that got deforested, with…GEDI, you’ll actually know how much biomass disappeared… It gives you that third dimension…for the first time, on a global basis, [it] defines the forest structure.”

Along with GEDI’s global forest data, several other experiments are being conducted on the International Space Station courtesy of ISS National Laboratory. InBev, producers of Budweiser, are conducting experiments in the harsh space environment to better understand how to design more resilient barley, a key ingredient in beer, more sustainably, especially under drought conditions. “The more sustainable they can design their crop, the better off we all are,” says Hank Shields, Chief Operation Officer for the ISS National Laboratory.

This mission also features two experiments conceived by K-12 STEM contest winners. In yet another nod to a space-themed movie, this time The Guardians of the Galaxy, the contest featured a Groot theme, for plant biologists, and a Rocket theme, for technology buffs. The Rocket experiment will investigate a new type of adhesive for repairing teeth, which could have applications for our own future in space as we explore, and perhaps colonize, our solar neighborhood. Groot will provide a clearer understanding of how roots and shoots develop in microgravity.

Most exciting to Shields is an experiment taking place in conjunction with Frederick National Laboratories, part of the National Cancer Institute. They are researching proteins known to be associated with gene mutations present in about 30% of human cancers. The protein structures are impossible to describe on the ground, but in microgravity, the structure becomes clearer, making it easier to design drugs that will attach to those proteins and perhaps creating another weapon in our arsenal against cancer.

Bob Behnken, a crew member on the upcoming Dragon 2 mission set to launch humans back into space in May 2019,  said “just like each of the SpaceX launches that happen these days, they’re all precursors to the future of human space flight.”

Christine Swanson is a Ph.D student in the School of Forest Resources and Conservation at the University of Florida. Her research focuses on the impacts of dams in the Amazon forest. Follow her on Twitter @thatsciencegal
Previous Dec. 5, 2018: Sustainable UF Collects Donations
Next Newberry Embraces Faith, Fellowship As Next Steps On Path To Reconcile Past