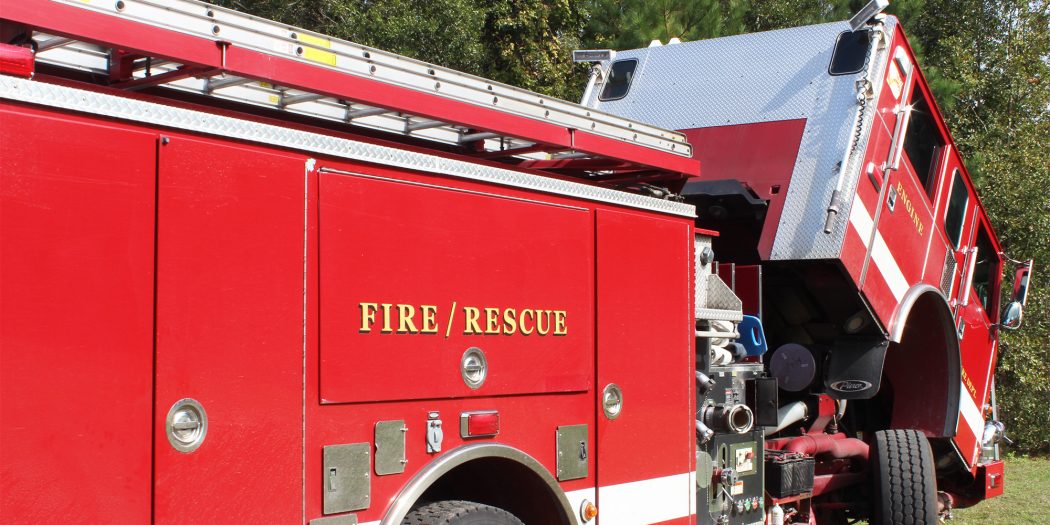 The LaCrosse Fire Department purchased a used 2012 Pierce Dash, fully equipped with the jaws of life, a deck gun and the capacity to hold 750 gallons of water. (Kathleen Frost/WUFT News)

LaCrosse Gets New Fire Engine After Month Without

For Louis Castle, driving the LaCrosse Fire Department’s new engine is exhilarating, accelerating from zero to 60 mph in seconds. But it’s more than just chrome and red paint; it helps to save lives.

The LaCrosse Fire Department was without an operational fire engine for the entire month of October, with only an 18-year-old tanker truck to respond to emergencies. But the station now has its first ever modern fire engine.

The truck, which was purchased in November, is fitted with a 750 gallon tank, a deck gun for more precise fire fighting and an extricator or “jaws of life.”

Harris was on the lookout for a new engine several months earlier, fearing that repairing the old truck would cost more than buying a new one.

“I searched a long time for the truck and finally got it,” he said.

The department has a small operational tanker truck, but Harris said it takes longer to respond to calls, is not intended to fight fires and is primarily used to provide assistance to engines.

Per their contract, ACFR gives the LaCrosse Fire Department $185,404 annually. ACFR provided an additional $20,000 this year to help pay for the new truck.

“Their only fire engine wasn’t mechanically sound, so the town made a solid case for a new one,” Theus, 50, said.

The other $11,000 came from property taxes from the citizens of LaCrosse, said Choi Yi Choi, LaCrosse’s accountant.

Choi said they took into account the need for a new fire engine when budgeting the 2017-2018 fiscal year. For the 2018-2019 fiscal year, the city is budgeting $63,912 to the fire department for employment, upkeep and other needs.

William Horzley, who joined LaCrosse Fire Department a year and a half ago, said the new engine is a substantial upgrade.

“The truck is more effective for the calls we get,” Horzley, 29, said. He said the new equipment allows them to more precisely fight fires, and the jaws of life helps to get people out of their vehicles if involved in a car accident.

He said the station has responded to 470 calls this year; 20 percent of those calls required an engine. The other calls were medical.

Harris also wants to purchase a smaller truck that would be more effective when responding to medical calls than the tanker the department currently has.

“This smaller one is going to cost more than the big engine because of higher demand, but we need it,” he said.

Castle said he can’t wait to see what the new engine does for the future of the local community.

“It’s got a lot more power,” he said. “We can get to people in need much faster and safer.”