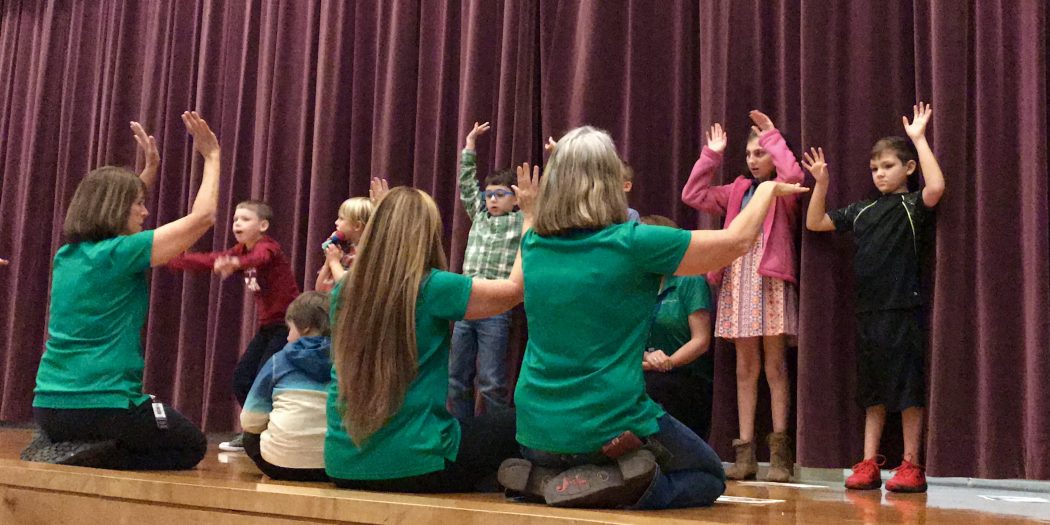 Janalyn Peppel, an Arts4All teaching artist, worked with special needs students from Bell Elementary and Bell High School for eight weeks. She purchased a 3D printer and virtual reality equipment for the students. The students honed in on the 3D printer and enjoyed watching the printing process through its clear panel, she said.

“Through art I’ve seen behavioral issues that are eliminated when I show up with some of this equipment,” she said. “It’s almost like they can relate to the equipment. It’s harder for them maybe to relate to social interaction, whereas equipment is a little bit easier for them.”

Throughout the semester, the students drew plans for objects that were then digitized by Peppel and printed using the 3D printer. Most creations were fun objects, like twisty shapes or animals. But some decided to use the 3D printer to help their classmates with mobility issues and created a tool that helps people grasp a spoon. Students also created 3D stamps of their initials, which were used to sign their watercolor paintings.

In addition to using the 3D printer, students were able to use virtual reality headsets to create art using a software called Google Tilt Brush.

Phoebe Salyers, an 11-year-old third grader, was one of three students in Florida to receive an award for her digital self-portrait made with Tilt Brush. The award was presented by the International Art Program for Children with Disabilities Art Contest, and her self-portrait is now on display at the Kennedy Center in Washington, D.C.

Ann Thomas said her son struggled with the fact that he can’t play Xbox video games with his friends due to his disability. Virtual reality allowed him to have fun with technology.

“It’s just amazing that, you know, these kids can do this,” she said. “You take a child like my son, who can’t use his left hand properly, and he’s able to do this.”

Peggy Sternad, a varying-exceptionalities instructor at Bell Elementary, has been teaching for 26 years. She has been with Gilchrist County schools for four years, and said she has never seen students respond so well to a program as they have to Arts4All.

The students have taken so well to using the 3D printer that Bell High School bought two for the students to continue using.

“This is fabulous,” Sternad said. “Let them show who they truly are through the things that they can create.”

Previous LaCrosse Gets New Fire Engine After Month Without
Next Dec. 5, 2018: Morning News In 90