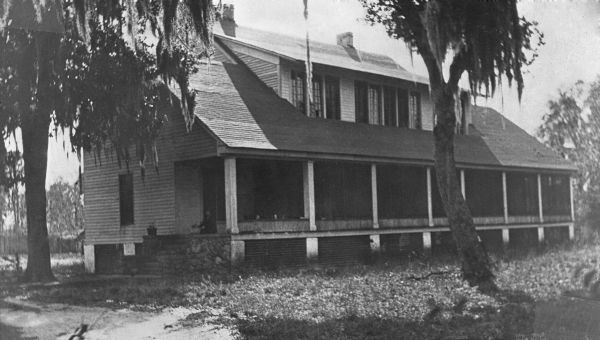 "Pine Hill" Plantation in Ocala, Florida, during the 1940s. (Courtesy of Florida Memory)

Where Waldo Got Its Name

Liz Lundberg, a janitor in West Virginia, used to travel to Florida in the winter to escape the cold of the north. When she passed through Waldo on her way to Ocala and Tampa, she wondered, what was the town named for? Submit your curiosities for Untold Florida, and we’ll find the answer. Preference is given to those who include their first name and city.

In a nearly 400-page book on the history of Waldo, only a few lines allude to the town’s namesake: Not a lanky figure in a red-and-white striped shirt and hat, but the politician and doctor — Benjamin Waldo.

Though not much is known about Benjamin Waldo, as much of his life slipped through time undocumented, town historians agree that he contributed very little, if nothing more than a name, to the town’s history.

“He’s a non-entity. It’s a non-story as far as I’m concerned,” said Kevin McCarthy, author of “History of Waldo,” which is set to be published in December.

Jim Powell Jr., the ancient records coordinator for the Alachua County Clerk of the Court, said Benjamin Waldo knew former U.S. Senator David Yulee, who had the power to name the town’s railroad station and, therefore, named the town after Waldo.

“The connection is only circumstantial, and a lot of what you hear has no basis in fact,” Powell wrote in an email, referencing rumors about Benjamin Waldo’s life. “I don’t repeat anything I can’t document.”

But one document written just over a decade ago sheds some light on an otherwise shrouded timeline.

The document, though not verified by sources or historians, provides a narrative of Benjamin Waldo’s life.

According to Andrews’ letter, Benjamin Waldo was born Dec. 11, 1816, in Edgefield, South Carolina, to Dr. Joseph Warren and Elizabeth Lamar.

After graduating in 1838, he returned home to Newberry District, South Carolina where he served as a legislator and practiced medicine.

He treated a woman named Sarah Lipscomb for typhoid or typhus fever, according to his memorial on the grave-documenting website Find A Grave. He continued visiting her after she recovered, and they married a year later.

Lipscomb came from a prominent family which bore a governor, secretary of state and the founder of Shorter College in Rome, Georgia. Benjamin Waldo also hailed from a distinguished family tree, including names such as John Milledge, who was a Revolutionary War patriot, governor and Georgia senator.

“I am not stating this information to show how ‘la-dee-da’ this family was but to show you that Dr. Waldo was, in fact, a man of note and well-connected,” Andrews wrote.

Andrews’ letter goes on to explain that in 1847 Benjamin Waldo and Lipscomb moved from South Carolina to Madison County, Florida, where her father had purchased land. In 1850, the family moved to Pine Hill, a plantation house three miles from Ocala on property that covered 2,000 acres.

Benjamin Waldo died April 4, 1871, at 54 years old, three and a half years after the death of his wife, leaving behind his four children who lived to adulthood, Andrews wrote.

The couple was originally buried on their plantation but were later reburied in Evergreen Cemetery in Ocala.

Although the history of the city of Waldo’s name has never been verified, Dodd and other members of the historical society continue to collect memorabilia to preserve the town’s heritage.

“People keep giving us more and more stuff,” she said, referencing the collection. “We’re getting a little crowded.”

Sarah is a reporter for WUFT News who can be reached by calling 352-392-6397 or emailing news@wuft.org.
@stansarahley
Previous ‘We Loved Her More Than Anyone’: 200 Attend Memorial For School Librarian
Next Local Toddler Makes History For Children With Disabilities

Some residents called it the truck route. Others preferred to call it what they felt it really was: a detour. But no matter the name, the roar of traffic through downtown was gone.