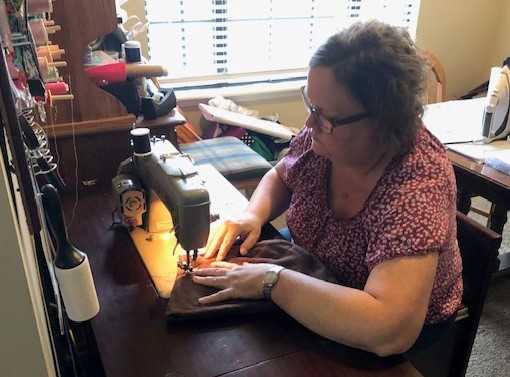 Shirley Wright, 49, of Orange Park, sews a bear from the clothing of a crime victim on Nov. 26. (Sean Denison/WUFT News)

Thomas Cummings III will never get to know his mother.

The 2-year-old boy was with his mother, Sahara Barkley, hours before the 24-year-old woman was fatally shot during a carjacking in Jacksonville on New Years Day 2018. But thanks to the efforts of an Orange Park woman, Thomas will have a teddy bear to hold on to his mother’s memory.

Shirley Wright, 49, makes teddy bears made from the clothing of loved ones lost due to violent crime. Her work is a part of an initiative by the Justice Coalition, a nonprofit organization that advocates for crime victims in Northeast Florida. The goal is to help grieving families cope with their loss.

“All of my bears have a story,” Wright said. “Some are more difficult than others.”

The family of Sahara Barkley is one of six families that will receive their teddy bears Dec. 7 at the Justice Coalition’s “Seasons to Remember” event at Redemption Church in Jacksonville.

Barkley’s mother, Rosie Brooks, said the teddy bear is for Thomas, who was 1 year old when his mother died. Brooks gave the Justice Coalition two pieces of her daughter’s clothing, a white shirt and a pink shirt, to make the bear.

“This is important because he won’t ever get the chance to have his mother,” Brooks said. “The bear will be something he will inherit from his mom, because he has nothing else.”

Wright said she started sewing as a hobby. She made her first bear in April 2017 when she responded to a neighbor’s Facebook post searching for someone to make a teddy bear from her daughter’s baby blankets. Her work was noticed by a volunteer at the Justice Coalition, and she was asked to take over bear-making operations to help families cope.

From then on, Wright said her hobby blossomed into a full-time business. She now runs her own sewing and alterations company, Sew What Shirley, out of her home in Orange Park.

“I believe that God has planted a seed, and this is where he wants me to grow,” Wright said.

Julia Thompson, a board certified clinical social worker in Florida and Texas, said the teddy bears have therapeutic value and can help assist in a person’s healing journey.

“I think teddy bears like this could provide comfort to people, reminding them of their connection with their loved one,” Thompson said. “The teddy bear in this case would serve as a tangible reminder of their loved one, as well as a type of grounding object to squeeze or hold when emotions might be overwhelming.”

Brooks said she is grateful for Wright and is looking forward to seeing her grandson receive the bear made of his mother’s clothing on Dec. 7.

Wright, who has witnessed mother’s cry when picking up their teddy bears, is looking forward to giving Brooks’ family and others their gifts. She hopes to continue to provide comfort to families for years to come.

“I really hope to be doing bears as long as I can,” Wright said. “I love doing them.”