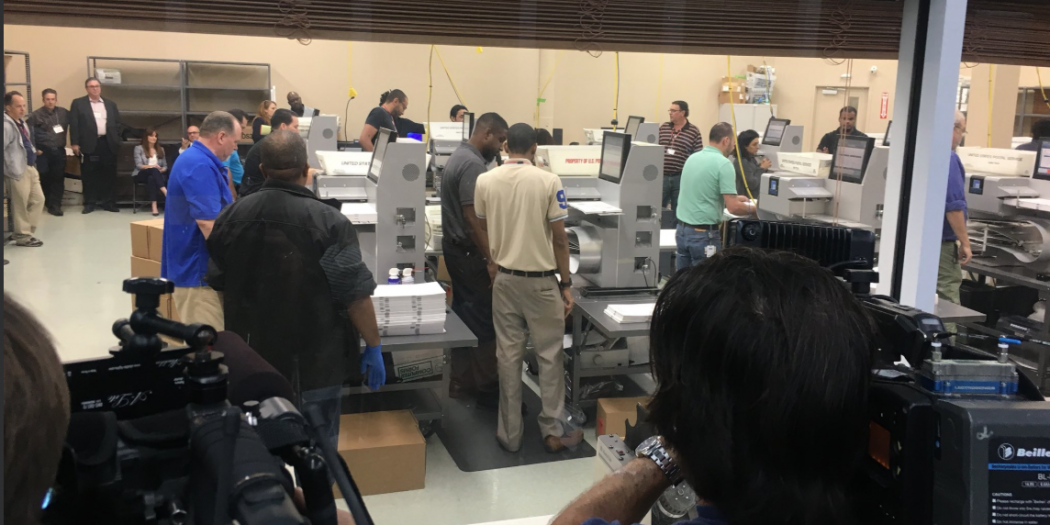 Reporter’s Notebook: Inside The Broward Supervisor Of Election’s Recount

LAUDERHILL — My alarm rang at 5:30 a.m. I leapt from my parents’ couch, stunned with excitement. I rummaged through my mom’s closet for a shiny blouse before embarking on the biggest story in Florida and one garnering close national attention.

Hours before, I made the decision to drive from the University of Florida to Broward to cover Florida’s recounts for governor, U.S. Senate and commissioner of agriculture.

I walked into to the 20-foot by 40-foot room with my tripod, camera and backpack strapped around my shoulders. To my right I saw over a dozen people in suits with stern faces. To my left was the window into the tabulation room, almost completely covered by cameras.

I felt overwhelmed. CNN, The New York Times, Miami Herald, CBS, AP— my idols, all around me.

And in the back-right corner of the room sat a woman with a brown straw hat shading her face. It was the infamous Brenda Snipes, Broward Supervisor of Elections (now former). She sat silently, looking through papers. Reverberations of the recent accusations, made by both (former) Governor Rick Scott and President Trump against her, reflected in her demeanor.

I walked over to the group of people operating the cameras in front of the window. All I wanted was a good shot. I leaned to the left; nope. three cameras in the frame. I leaned to the right – even worse. There had to be another way. I saw an empty chair behind AP’s cameraman. I climbed onto it, towering above everyone in the room. The camera men all looked at me in surprise, but then went back to what they were doing.

I felt accepted into the pack. I stood on the chair, in heels, eyeing a shot through my lens.

As the hours flew by, a familiar rhythm developed in the room. First, the canvassing board would announce they’re in session. As silence fell over the room, lawyers rushed to the divider, ready to react. The press turned their cameras on the board as they updated everyone before calling for recess. Monotony returns.

The place looked like a jungle gym. Reporters lined the floor and chairs, chowing down on greasy food, filling in each other on what they’ve missed, writing stories, calling sources. Among the chaos, attorneys huddled in groups, whispering with bugged out eyes and furrowed brows. Others watched the tabulation room closely, writing notes onto a pad.

Then, eight people, representing parties and candidates, were granted access to watch the ballot-counting process from the tabulation room. They rotated in shifts, making sure to monitor the process around the clock.

Every now and then there was a break in the rhythm: Unexpected words from Snipes. Snipes sat in silence throughout most of the days.  The minute she spoke, journalists rushed over, mics in hand, to get the sound.

Day one of the recount, the board had just ended a session and Snipes began to turn away when a reporter asked for her opinion on the lawsuits. She turned back and answered.

Every reporter in the room rushed to the rope and started recording the impromptu press conference. The constant shutter of camera lenses broke the tension. I knelt directly across from the board, simultaneously recording the audio with my phone and recording the scene with my camera. I propped my camera on a pole of the divider to steady the shot.

Once Snipes finished her last words there was a brief moment of silence before the room exploded. Then reporters and photographers rushed to their corners of the room to share what just happened.

Afterward, I stepped outside for some air. In the distance, I saw protestors pressed against the caution tape. Once they saw me, the only person outside of the office doors besides cops and workers, they focused their cameras on me, while shouting “fake news.”

I felt initiated into the journalism world.

As the recount grew longer and longer, my body grew tired. My hands shook, caffeine pulsing through my veins.

I looked around and saw reporters changing shifts, going home for the day. Then there was me, a one-person team. I took the pictures, I interviewed, I tweeted and I wrote. I was exhausted.

I remember sitting in between CNN reporters and BBC reporters eating lunch. I sat with my head in my hands thinking of a sixth story idea, sipping on black coffee. I ran on empty, but I loved every minute.

By day three, I felt at home in the media horde. I filled in other news outlets when they missed an update. I helped a BBC reporter find a source. I broke news alongside the others. As the recount chugged on, it became more about getting information to the public, not about what outlet sent you here.

I never felt prouder to be a journalist.

Cat is a reporter for WUFT News and Fresh Take Florida who can be reached by calling 954-657-3385 or emailing cgloria@ufl.edu.
Previous Gainesville Food Bank, Feeding Community Year-Round, Is Ready For Holiday Action
Next Unvarnished: When Gainesville Wasn’t So LGBT-Friendly