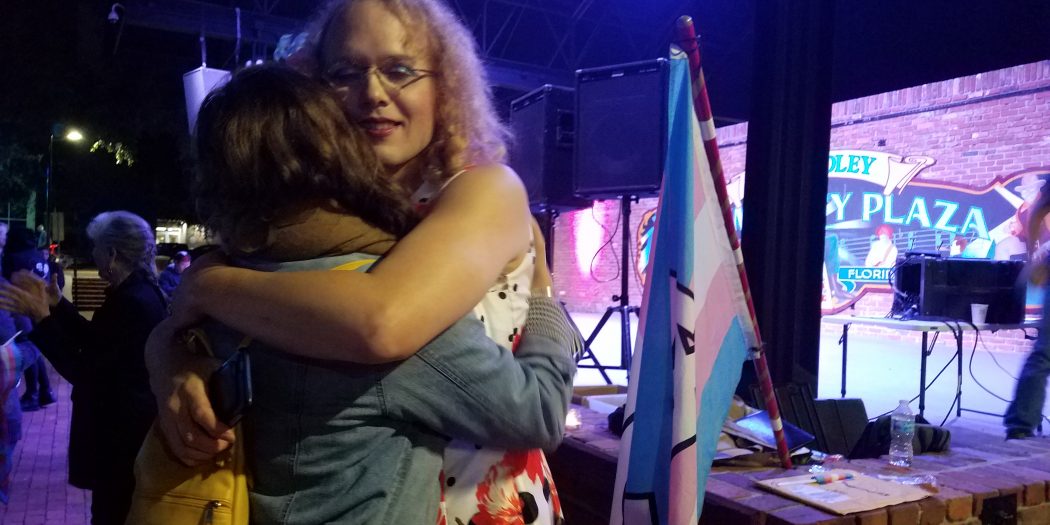 As the two women recited the names, locations, dates and cause of death of transgender people, mostly women of color, killed across the world within the last 12 months, floodlights illuminating both sides of the stage cycled gently through the colors of the rainbow. Couples hugged, leashed dogs stirred and hand-held transgender pride flags drooped.

“I made it to the last page without crying,” Claire, a Gilchrist County resident and senior biological science researcher at the University of Florida College of Veterinary Medicine, said afterward.

Gainesville Mayor Lauren Poe offered his support and on behalf of the city during the vigil.

“There’s a tradition in many cultures around the world that so long as we continue to speak their names and honor their lives that they go on living in us, which is why it’s so important that we come together at moments like this,” Poe said.

A list compiled by tdor.info, a website known as the Remembering Our Dead project, cited transgender killings in 28 countries during the past year. Five of the 23 U.S. transgender deaths occurred in Florida: three in Jacksonville, one in Orlando and another in Sarasota County. There were also 141 victims in Brazil, 62 in Mexico and 47 simply identified as “unknown.”

“There are so many more that we just don’t even hear about,” local activist Melina Rayna Svanhild Farley-Barratt, 39, told the crowd at the vigil.

No one from among the onlookers volunteered to take the mic to share their thoughts once all the names had been called, shifting the mood from somber to social. Some remained to mingle and drink hot cider, cocoa and coffee as children squealed and tumbled on the artificial grass.

Jillian Goldstein, 29, of Gainesville, said she attended in support of her roommate and good friend, Kane Barr, 30, who helped organize the vigil and shared a poem onstage.

“I just do it to make sure the trans community feels supported and visible,” Goldstein said.

About 40 percent of transgender people attempt suicide at least once in their lives compared to 5 percent of the general population, according to a European Psychiatry research study.

“We do as much violence against ourselves,” Claire said.

Farley-Barratt, who received many an embrace before and after the ceremony, said she was pleased with the vigil turnout.

“We need our allies to step up to the plate and be part of the conversation,” she said. “There’s not enough of us.”

Vincent is a reporter for WUFT News who can be reached by calling 352-392-6396 or emailing news@wuft.org.
Previous Election Changes Eyed As 2018 Results Finalized
Next Gainesville Food Bank, Feeding Community Year-Round, Is Ready For Holiday Action