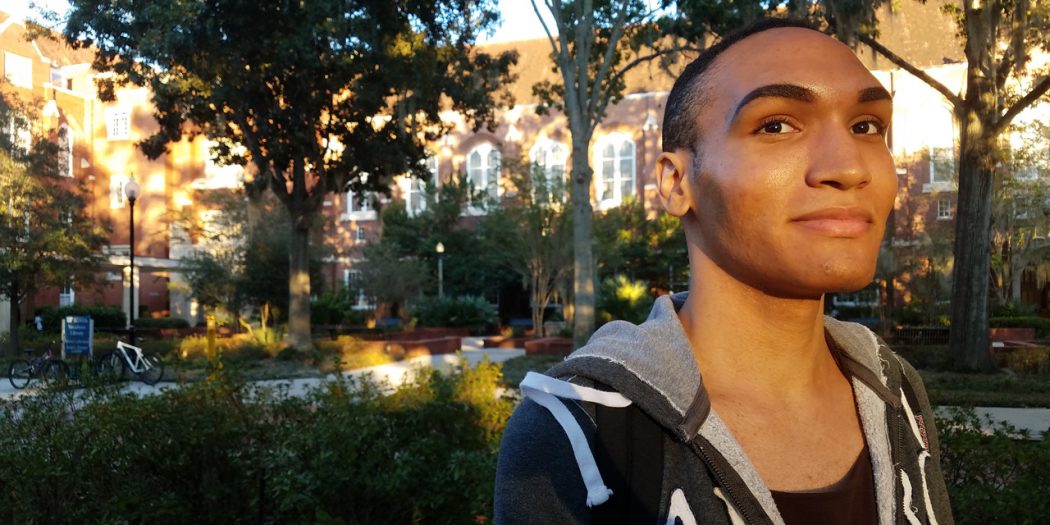 Cameron Barnes, 20, of Gainesville, has faced harassment at school and in public for living openly as a transgender woman. She doesn’t feel safe in the city, she said. (Vincent McDonald/WUFT News)

‘We Won’t Be Erased’: Gainesville Marks 2018 Transgender Day Of Remembrance

Just as she did a year ago, Carrie Cotten of Gainesville will take the stage Tuesday night at Bo Diddley Plaza to read aloud the names of the transgender people killed in 2018.

Tuesday is Transgender Day of Remembrance, an international observance of the lives lost in acts of anti-transgender violence. Every year on Nov. 20, transgender advocates and LGBTQ organizations across the country and world host vigils.

At least 22 transgender people have been killed this year in the U.S., according to the Human Rights Campaign. Most of those victims were women of color, including five black transgender women from Florida – three in Jacksonville and one each in Orlando and Sarasota County.

At 7 p.m., area residents will gather at Bo Diddley for a public statement from the City of Gainesville, poetry performances and candlelighting as the names are called.

“It gives me a feeling of terrible sadness that we have to have that long list every year,” Cotten, 59, said Monday, adding: “And who knows if one year my name will be on the list?”

Though local LGBT groups have commemorated the remembrance day since at least 2002, when Cotten herself transitioned, this is only the second time the event will be at the plaza, she said.

“Being able to do it right there in the center of the city, in public, it really means a lot,” she said.

“The Transgender Day of Remembrance is about recognizing the unique violence and discrimination that the transgender community faces,” said Terry Fleming, co-president of Pride Community Center, which is based in Gainesville.

Cotten is a board member for the local chapter of Parents, Families and Friends of Lesbians and Gays (PFLAG), which also will be at the event. Another PFLAG member, Elizabeth Husband, 75, a retired school therapist, is helping to organize it. Both her 52-year-old son and 17-year-old granddaughter have transitioned since she moved to Micanopy in 2013.

“It’s something that’s very important to me – to be an ally,” Husband said.

Natalia Dupree of Brooker will share her story at the vigil. Dupree lost a close friend, Antash’a Devine Sherrington English, 38, who was fatally injured in a drive-by shooting on June 1.

English’s death and violence against black transgender women like Dupree motivated her to found the Unspoken Treasure Society, a nonprofit organization that offers support and education to the trans community in north Florida. The group held its first meeting Nov. 13 at the Pride Community Center, and Dupree said it plans to host an event at least once a month.

“My goal and my mission is to educate the youth as well as the older community … and let them know that someone loves them,” she said, adding later that “it oozes out of my pores to love on people, and that’s deeply needed in this area.”

Dupree grew up in Gainesville, but left as an older teenager for Atlanta, where she transitioned. Since returning to Florida in 2013, Dupree has felt a difference in how LGBT people are treated.

“I feel safe here, but I don’t go out a lot,” she said. Referring to the harassment and assault that trans women face, she added, “I don’t want to even take the opportunity to go through that.”

Cameron Barnes, 20, a junior studying French and Spanish at UF and accounting at Santa Fe College, feels similarly. Though supported by family and friends, Barnes said she fought many a bully during her 12 years at P.K. Yonge Developmental Research School in Gainesville and has experienced constant verbal attacks and sexual harassment because she is a trans woman.

“I just want to go to the grocery store without fear that somebody’s going to try and beat me up,” Barnes said. She added, “I don’t think that it’s going to happen, but there’s a part of me that’s mentally preparing myself for that to happen.”

Barnes has stopped going to clubs and is careful about which stores she frequents; she goes to the Walmart near her grandmother’s home because people there are less likely to be hostile.

Barnes said she didn’t know about the plaza vigil until she was interviewed. In years past, she typically has spent Trans Day of Remembrance among friends, practicing moments of silence and playing video games afterward to lighten the mood.

“I don’t know how to describe it. It’s just so disheartening,” she said. “Every time the day comes by, it’s just a sad day because I just remember that there’s so much violence and no one cares.”

Those who will be the vigil said they will be sure to make it plain that many people do care.

“We’re here and we’re not going anywhere,” Dupree said. “We won’t be erased.”

Five of the 22 reported murders of transgender people this year occurred in Florida. All of the victims were black transgender women.

Vincent is a reporter for WUFT News who can be reached by calling 352-392-6396 or emailing news@wuft.org.
Previous Nov. 19, 2018: Evening News in 90
Next Study Predicts Monkey Population Boom In Silver Springs State Park