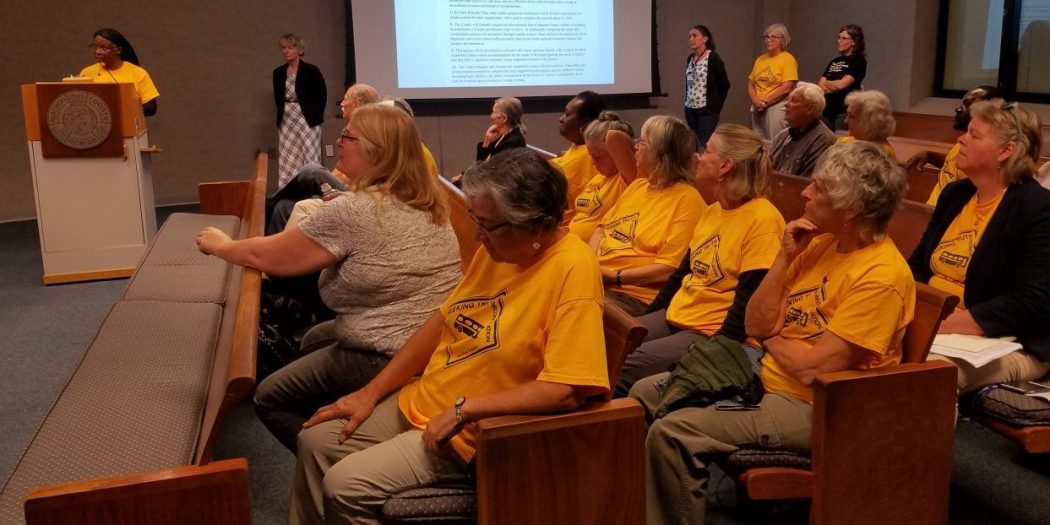 Alachua County Drafts Future To Reconcile Its Past

The Alachua County commission met on Tuesday to hear public comment on the county’s next steps in its truth and reconciliation initiative. The process could take decades, but the county has already found a solid starting point. Concerned citizens worried that this extensive process could inhibit the county from claiming a memorial marker honoring Alachua County’s lynching victims.

In June, Vice Chair Robert Hutchinson drafted a 10-step process for truth and reconciliation. One of those steps includes an online archive of historical data, photos and interviews. County Manager Michele Leiberman said the website includes a reparations section, an events page and an extensive archive of documents including meetings minutes from the 1860s. One document showed the county imposing a $650 property tax on African Americans.

More research is needed before the website can go live, Leiberman said. The county is hoping to collaborate with University of Florida’s Center for African American studies on the project.

As part of its truth and reconciliation, Alachua County hopes to obtain a lynching memorial slab from the Equal Justice Initiative’s Community Remembrance Project in Montgomery, Alabama. The EJI created the project to recognize lynching victims and racial inequality across the nation, and is giving historical markers to cities and counties that can show they’ve made an effort to reconcile the past.

Hutchinson’s 10-step proposal notes that the county will ask for the slab once it has “substantially completed this truth and reconciliation process.”

This raised some concern for some in attendance.

Alachua County’s Racial Justice Task Force said Hutchinson’s proposal will take decades, even centuries to complete, and that should not inhibit the county from requesting the memorial slab.

“That is, after all, one of EJI’s major goals. To have monuments all around the country that confront our terrible history.” said Sonya Rudenstine, Alachua County resident.

The task force said the memorial slab will offer tangible representation of Alachua’s unsavory past. It hopes the slab will be displayed prominently and will act as a reminder of the atrocities the county once committed.

“It took us hundreds of years to dig the hole of racial injustice that we’re in now. We’re not going to sit around for [another] 200 years to undo it. We’ve already wasted 100 plus years, so it’s time to get about it,” said Hutchinson.

While an extensive online archive is the starting point for this process, other steps are still to follow. Hutchinson’s proposal notes that the county plans to co-sponsor one or more public reading projects like the Gainesville Mayor’s Book Club and host town hall meetings where citizens can share their thoughts and research on how the community can reconcile its dark and disturbing past.

Rebecca is a reporter for WUFT News who can be reached by calling 352-392-6397 or emailing news@wuft.org.
Previous Afternoon News in 90: Nov. 15, 2018
Next Gillum Loses After Recount, Other Races Go To Hand Count