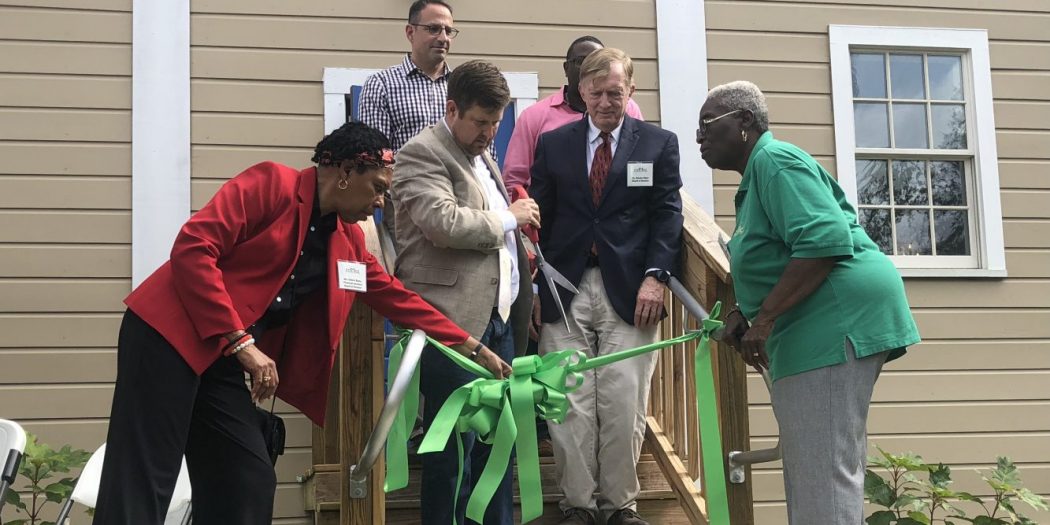 Members of the CCMCC Board of Directors and elected officials cut the ribbon out front during a ceremony on Monday Nov. 12. (Alena Poulin/WUFT News)

The brassy notes of Lanard Perry’s trumpet filled the airas over 100 people gathered to celebrate the completed renovations at the Cotton Club in East Gainesville.

The festivities included tours of the band hall and the rest of the 1.6-acre property, as well as speeches by elected officials involved with the renovation process, members of the board of directors and individuals with personal connections to the building’s past.

As a stop on the “Chitlin’ Circuit,” the Cotton Club was a venue for African-American musicians to play at during an era where racial segregation was still prevalent. Otis Stover, vice chair of the CCMCC board of directors, said it was named after the Cotton Club in Harlem and that the Chitlin’ Circuit stretched across the entire east coast all the way down to Miami.

The goal of the CMCC is to preserve the history of the time period and serve as a place to educate people. Both Stover and Vivian Filer, chair of the CCMCC board of directors, said they see its importance as both a part of the community they grew up in and part of history as a whole.

Bo Diddley, for whom the downtown Gainesville plaza was named, and B.B. King were just two of the many musical greats who graced the Gainesville Cotton Club stage.

“Daddy didn’t create the blues, he just perfected it,” said Patty Elizabeth King, B.B. King’s daughter, in her speech at the event.

During the event, King presented Filer with the donation of a copy of a letter former President Barack Obama wrote to her father. For King, the club holds a history that is deeply personal, but she said she it is also an important place to bring together the community.

“It is very important to me, this is where my mom met my father. She booked his band, they begin to date and the rest is history,” King said. “And here I am.”

Filer said B.B. King’s famed guitar Lucille may also end up being temporarily displayed at the museum in the future.

After serving as an entertainment venue, the Cotton Club building was a furniture warehouse until the 1970s.  It was then left vacant and fell into a state of disrepair until its purchase by current owners, Mount Olive AME Church, in the mid-1990s.

Renovation efforts on the music hall started in 2004 when the Cotton Club received a $350,000 Florida grant, but eventually came to a standstill as the funds were lacking to finish the project. They received a second grant of $489,000 and about $280,000 to $300,000 from the Community Redevelopment Agency, Filer said. The community also fundraised money and companies such as Perry Roofing, owned by Fl. Sen. Keith Perry, were contributors.

Filer said the estimated cost of the renovations so far is about one million dollars, and she believes it will take at least an additional quarter million dollars to finish getting set up. The next step, she said, is raising the funds to install curtains, purchase exhibit display cases and secure artifacts to display.

Both Filer and Stover said that, in addition to helping represent a crucial part of African American history, the CCMCC will also help revitalize the neighborhood bringing development and economic growth.

“It means that we are having a hand in bringing the Springhill neighborhood back to life,” Stover said of the completed renovations on the band hall building.

Continuing renovation plans include the restoration of the Perryman Store and the shotgun houses.

“Shotgun was from the fact that you could open the front door and the back door and shoot right through,” Otis Stover, vice chair of the CCMCC board of directors, said when describing the culturally significant style of the small rectangular homes to a tour group.

The old grocery store is to be refurbished as a cafe, and Filer said the houses will show what life was like for people who lived there back in the day.

“The goal is to go ahead and make all of these buildings functional so that we build a village,” Filer said.

Now that the ribbon cutting is complete, the museum is set to open in early 2019. It will be available to rent out for events and will also host a number of exhibits. Filer said there will be a show from the Smithsonian coming in early November.

“Folks over here understand that history is the people, the building is a container,” said Kali Blount, an attendee at the event. “That building means nothing without what the people do in the building, and that’s history.”

Alena Poulin is a reporter at WUFT News and can be contacted by emailing alenarene@ufl.edu. You can follow her on Twitter under the handle @AlenaPoulin and Instagram under the handle @alenarene
@AlenaPoulin
Previous Hundreds Of Overcounts, Thousands Of Undercounts In Alachua and Marion Counties
Next Plans Taking Shape For Half-Cent Sales Tax Revenue To Improve Alachua County Schools