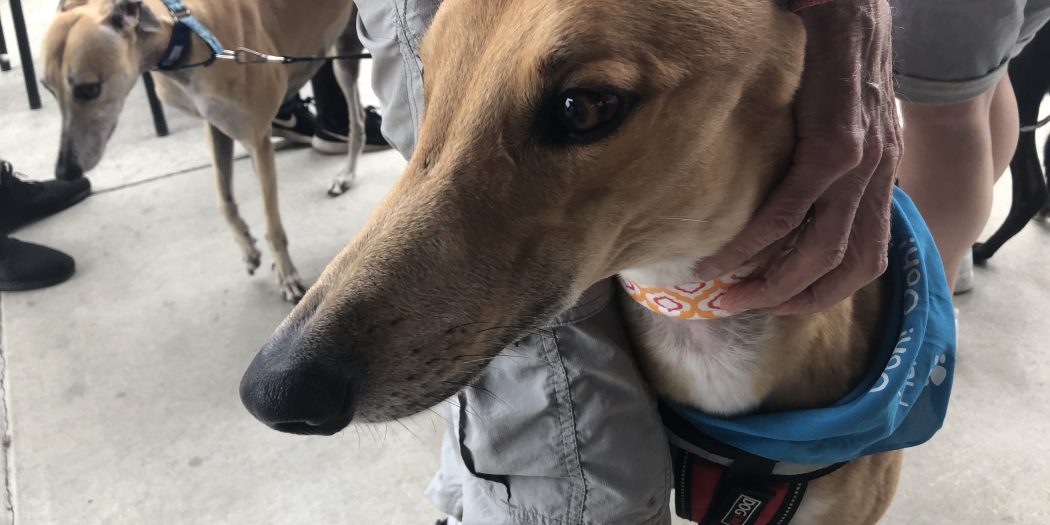 Cecil was one of three greyhounds up for adoption at the Greyhound Pets of America Gainesville's event held Saturday, Nov. 10 at the Tioga Starbucks. Cecil has participated in 120 races from Sept. 2016 to June 2018 at Derby Lane race track in St. Petersburg, Florida. (Eman Elshahawy/WUFT News)

Nearly 8,000 greyhounds will need new homes after Floridians voted to pass Amendment 13 which will ban dog racing in the state.

Just days after the amendment passed in the midterm election with 69% of Floridians voting in favor of the ban, the Greyhound Pets of America, a volunteer-led greyhound adoption group, experienced the influx firsthand.

“The biggest problem with Amendment 13 is that it had no money allocated for what is going to happen to these greyhounds if greyhound racing is banned,” said Rita Phillips, president of Greyhound Pets of America.

Phillips says adoption groups all around the country will be impacted.

“We will step in and do the work because we are committed to greyhounds,” she said.

As part of its efforts, the organization hosts multiple greyhound meet-and-greets throughout the year, with their most recent one held Saturday, Nov. 10. Dozens of people gathered at a Starbucks in Tioga where the group hosted an adoption event for three racing greyhounds. Some brought their own greyhounds along to the event.

Bryan Barker currently fosters two greyhounds, and the 26-year-old said he is worried for the thousands of greyhounds who will need new homes.

“We were kind of left with, ‘here are all these dogs that need to be adopted,’ and there’s no plan to get them out and fostered,” he said.

The Humane Society of North Central Florida supported the amendment, and Director of Development Margot DeConna said the group was very pleased that it passed. She said the ban will go into effect in two years which will give adoption groups and shelters across the state enough time to find good homes for the greyhounds.

“There are no funds allocated to finding these greyhounds home once the phaseout occurs, but this is already what rescues and shelter do,” she said.

DeConna expressed her confidence in groups like the Humane Society to be able to find the thousands of racing greyhounds in Florida homes.

Amy Pearson, a greyhound adopter-hopeful who came from Tallahassee to attend Greyhound Pets of America’s event in Tioga, also supported the amendment to ban greyhound racing. She said she voted “yes” on Amendment 13 with hopes to see more greyhounds in homes, not in tracks.

“I knew that if it was passed there would be a large number of greyhounds needing adoption, and I was looking into getting a dog so I kept this in mind voting,” she said.

Only time will tell if the demand for ownership meets the supply of greyhounds. For now, thousands of these four-legged athletes have until January 2020, which is when the amendment takes effect and bans racing statewide.

Previous November 13, 2018: Morning News in 90
Next One Year After Irma, Some Marion County Cities Lack Reimbursement From FEMA