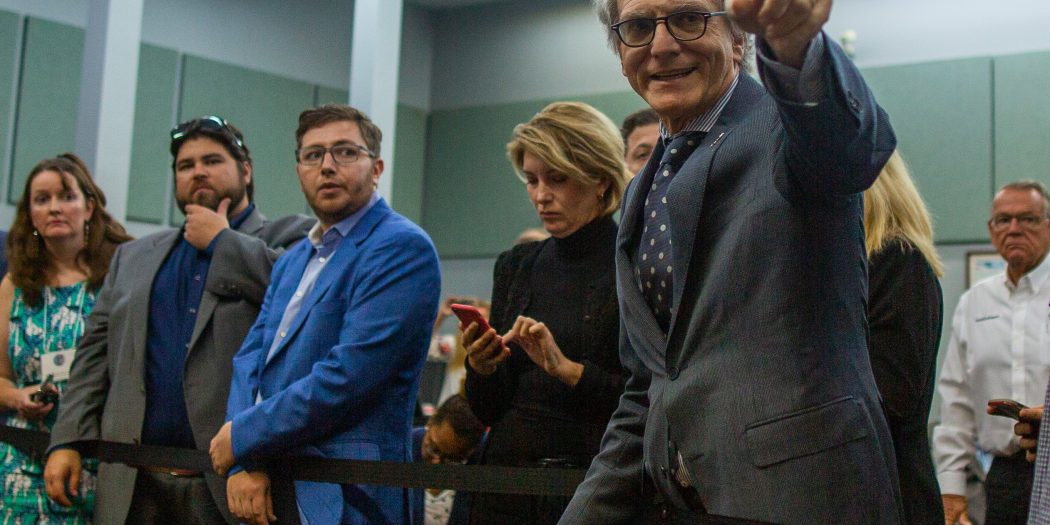 Pressure, Protests And Lawsuits Reminiscent Of 2000 As Recount Rolls Out

All eyes were on Florida after the presidential election eighteen years ago. The race between George W. Bush and Al Gore came down to a difference of fewer than 600 votes in Florida, triggering a recount.

Now, with Florida carrying out three unprecedented recounts in races for governor, U.S. Senate and commissioner of agriculture, the state is experiencing deja vu.

In the early morning hours following the 2000 election, seeing the 50,000 vote gap that separated the race on the networks, Gore called Bush and conceded.

Gore left his hotel in Nashville to go address his supporters. On his drive, he got a call from one of his advisors saying the gap had narrowed to less than 1,000. Gore immediately retracted his concession.

This year on election night Democrat Andrew Gillum conceded to Republican Ron DeSantis in the governor race when DeSantis led by tens-of-thousands of votes.

When the gap tightened to fewer than 34,000 votes, as canvassing boards tallied unofficial results throughout the week, Gillum also retracted his concession.

“I am replacing my words of concession with an uncompromised and unapologetic call that we count every single vote,” he said four days after the election.

DeSantis considered the small gap in votes a win nonetheless.

“Since the election a few days ago, we have begun our transition efforts to build an administration that can secure Florida’s future,” he said in a video.

Involved parties filed over 50 lawsuits within the month following the 2000 election in regards to the recount and deadlines. Ultimately the suits came down to the final 5-4 Supreme Court ruling that stopped the hand recounts, stating the recount process was inconsistent and that a fair process couldn’t happen in time.

Bush officially won the election a month after election night.

In less than a week after this year’s midterm election, Florida candidates have filed multiple lawsuits involving objections to the counting process and oversight.

No lawsuits have stopped this year’s recount process like Bush v. Gore , but Scott’s most recent lawsuit attempted to do so in Broward County.

His lawsuit against Broward County Supervisor of Elections Brenda Snipes called on law enforcement to impound ballots and machines due to Snipes lack of transparency throughout the process.

In a speech the same night as Scott filed the suit, Gillum compared Scott’s attempt to stop the recount to the 2000 election.

“In the aftermath of canvassing your vote, you hear the governor, the president of the United States, the junior senator of Florida say that there’s rampant voter fraud and that we need to stop the count, with no proof, nothing except a vote margin that is increasingly shrinking,” he said.

In addition to disrupting Broward’s recount, Scott’s lawsuit asked that law enforcement preserve the ballots saying Snipes may “destroy evidence of any errors, accidents, or unlawful conduct.” His motion has yet to be answered.

Meanwhile, Republican protestors gathered outside of the Broward County Supervisors of Elections, waving Trump flags and chanting “No votes from dead people. No votes from illegals.”

Eighteen years prior, protestors on both sides stood outside the Broward County courthouse, where the recount took place, doing the same thing.

In an article published on Nov. 26, 2000 the Philadelphia Inquirer wrote:

But not everything about this recount mimics the 2000 one.

Broward started the machine recount at 11:23 a.m. Sunday, hours after the planned start time due to machine errors. Once the recount began, the board let eight people into the tabulation room where machines counted votes.

Two of those people represented their respective parties; the other six stood watch for the candidates.

Judge Robert Lee sat on Broward’s canvassing board for the Bush-Gore recount of 2000. He recalled that the board only allocated ten seats for the public to watch the process. Campaign representatives were not allowed into the tabulation room.

“It’s more generous than in 2000 because everyone had to look through the window,” Lee said.

Another major difference lies in the timeline for this recount.

“It took us until after Thanksgiving to finish, now it all has to be done by Thursday,” Lee said.

Laws changed in years following 2000 creating tighter deadlines for the process, he said.

In fear of a repeat of Bush v. Gore, Gillim said he wants every vote counted no matter how long it takes.

“I demand that every vote be counted, even if it takes weeks,” he said.

Cat is a reporter for WUFT News and Fresh Take Florida who can be reached by calling 954-657-3385 or emailing cgloria@ufl.edu.
Previous Before A Recount, Alachua County Elections Officials Had To First Get Through 826 Ballots
Next Overcoming Adversity Through Archery