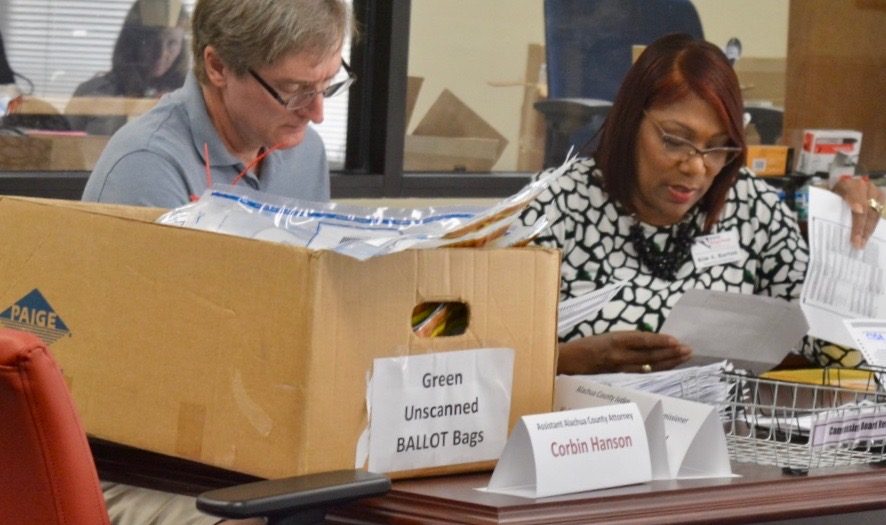 Before A Recount, Alachua County Elections Officials Had To First Get Through 826 Ballots

Before they began recounting votes for statewide elections, the Alachua County Supervisor of Elections office faced the challenge of processing more than 800 ballots still not counted.

After an affair lasting all day Friday and late into the night, the elections office submitted its unofficial results early Saturday morning, hours before the state issued a recount of six races.

The board also processed more than 400 ballots sent in by mail or from military overseas, and another 140-plus that did not get through voting machines because of outcomes such as spilled coffee, white out or initialed bubbles that the machines could not read, elections officials said.

With elections for the U.S. Senate, Florida governor, agriculture commission, two state representatives and a state senator on the line, the Alachua County elections canvassing board is recounting more than 116,000 votes using 30 machines and 30 workers in 12-hour shifts.

“We’re not stopping,” said Alachua County Supervisor of Elections Kim Barton, whose office has until 3 p.m. Thursday to finish the work. “We’re going to go 24/7 until it’s done.”

Several residents watched the canvassing board on Friday discuss the provisional ballots the elections office received from early voting through Election Day. This involved people who may have voted at a wrong precinct, had mismatched signatures, no matching records, registered to vote late, or were deemed ineligible to vote, said Will Boyett, the elections office’s chief deputy.

The board rejected almost half of the provisional ballots presented to it.

For three and a half hours, Bobby Mermer, co-president of UF Graduate Assistants United, helped call voters with issues on their ballots to submit affidavits and verify their identities so their votes would be counted. Mermer said he wanted to make sure every vote was counted.

“These people waited in line and researched their candidates, so out of principle it’s a win,” Mermer said.

Crystal Bower, 66, of Gainesville, stayed the entire time to witness all of the activity.

“I want to learn more so I could be a better poll worker,” said Bower, a poll worker since only the primary election in August. “I also want to make sure people’s votes counted.”

The canvassing board debated some of the provisional ballots, including that of Daniel Chitwood’s, which had a problem because of his signature. At first, the board moved to reject his ballot, but several witnesses asked it to reconsider.

In an interview afterward, Chitwood, 24, a Sante Fe College student, said he changed his name eight months ago as part of his transition as a transgender man five years ago. He registered to vote under his new name, but poll workers questioned his signature on Election Day.

As the board met, when Hanson suggested that Chitwood could have signed his old name, Simone Chriss, a transgender rights attorney, objected. Chriss said a provisional ballot wouldn’t have been needed if the poll workers had offered Chitwood what’s called a signature differs oath form, or had him sign with his dead name. In addition, Chriss said, such a situation unnecessarily causes someone in transition to be accidentally outed at a public place.

“There’s so much fear and anxiety already in this population that this adds discrimination and fear,” Chriss said. “To explain this had to be devastating for someone trying to exercise their rights.”

Chitwood said when he submitted his provisional ballot, he didn’t think it would go through. He was thankful for the people who successfully lobbied the board to accept his ballot.

“I didn’t really think anyone, especially people who didn’t know me, would stand up for me like that,” he said.

It being his first election voting since his transition, Chitwood said he’s worried about a similar experience happening again at the polls.

“It makes me not want to go vote again,” he said.

Correction appended: A previous version of this story stated there were 180,000 ballots cast in Alachua County. There were slightly more than 116,000, as the story now reflects. There are more than 180,000 total registered voters in the county.

Christina is a reporter for WUFT News who can be reached by calling 352-392-6397 or news@wuft.org.
Previous Unvarnished: Bless Her Heart, And Her Strength, Too
Next Pressure, Protests And Lawsuits Reminiscent Of 2000 As Recount Rolls Out