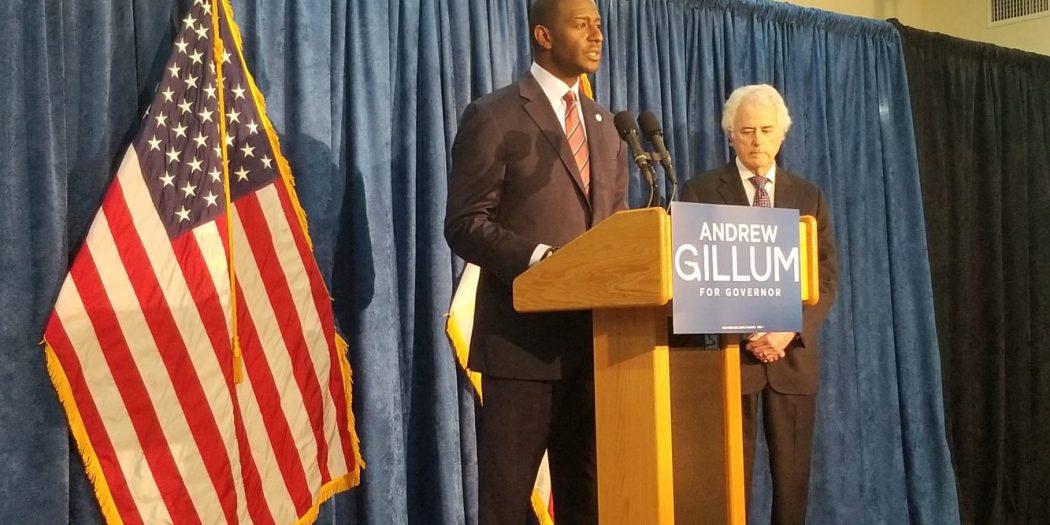 Andrew Gillum calls for every vote to be counted during a press conference on Saturday in Tallahassee. He is joined by his lawyer Barry Richard. (Matthew Arrojas/WUFT News)

The Florida secretary of state ordered a machine recount for the governor, U.S. Senate and Agriculture Commissioner races on Saturday.

The recount was called for after the unofficial results for all three of these races showed a margin under half of a percent point between candidates. State law requires a machine recount when federal, state and multi-county races are this close.

Democratic gubernatorial candidate Andrew Gillum trails Republican Ron DeSantis by 0.41 points, according to unofficial results. That margin was much wider on election night, but DeSantis’ lead shrunk as outstanding votes in South Florida’s Broward and Palm Beach counties were added throughout the week.

During a press conference in Tallahassee on Saturday, Gillum retracted his election night concession. The Tallahassee mayor said that he first wants to make sure that every vote is counted before declaring victory or defeat.

“What I do know is that we don’t just get the opportunity to stop counting votes because we don’t like the direction in which the vote tally is heading,” he said.

DeSantis said that he is confident in the results turned in to the state today and is already preparing to take over the governorship.

“Those results are clear and unambiguous, just as they were on election night, and I am honored by the trust that Floridians have placed in me to serve as your next governor,” he said.

Meanwhile in the Senate race, Republican candidate Rick Scott won his lawsuit against the Broward County Supervisor of Elections Brenda Snipes. The judged sided with Scott, requiring Snipes to disclose information about the number of votes cast and counted.

The Senate race is even closer than the governor’s race, with Scott leading Democratic incumbent Bill Nelson with a margin of 0.15 percent, according to unofficial results from Florida’s Division of Elections.

Even closer still is the agricultural commissioner race. Democratic candidate Nikki Fried declared victory on Saturday while leading her opponent by just 0.06 points. Her opponent, Republican Matt Caldwell, declared victory on election night, but Fried moved ahead as outstanding votes were tallied in recent days.

Now that a machine recount has been ordered from Secretary of State Ken Detzner, supervisors of elections across the state will need to run ballots through voting tabulators machines again. Any ballots with undervotes and/or overvotes — when a voter marks too many or too few choices in a voting category — those ballots will be set aside in case a hand-recount is called for.

According to the Florida Department of State, the results of this machine recount are due on Thursday, November 15. If any race is closer than one fourth of a percent after this recount, then a hand recount will be ordered by Florida Secretary of State Ken Detzner. The results of that recount are final.

These recount rules were put into place by the Florida legislature shortly after the 2000 election. Gillum’s lawyer Barry Richard said that these laws have greatly simplified the recount process.

The returns from the newly ordered machine recount are due by 3 p.m. on Thursday.

Matthew is a reporter for WUFT News and Fresh Take Florida who can be reached by calling 786-332-8003 or emailing marrojas@ufl.edu.
Previous Everything You Need To Know About The Recount Lawsuits
Next Unvarnished: Bless Her Heart, And Her Strength, Too