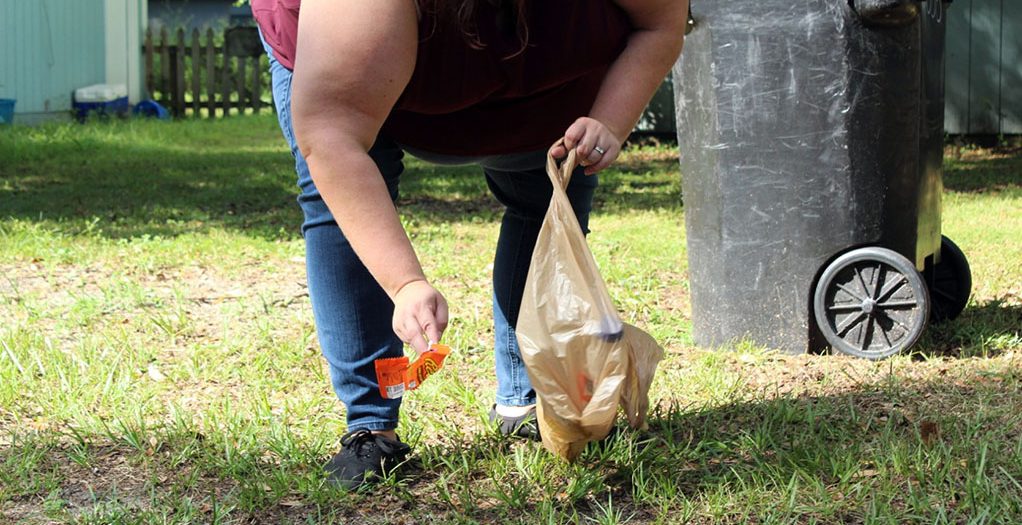 Red solo cups, pizza crusts, beer bottles and the occasional puke puddle are just some of the things left behind for midtown residents and businesses to clean up.

Neighborhoods and businesses that flank campus have struggled with increased litter since the start of football season, and trash violations from the city of Gainesville get acknowledged, but rarely corrected. Chip Skinner, spokesman for the Public Works Department, said city ordinances require trash to be in correct containers and off grounds, or residents could receive a citation.

Waste that is properly disposed in bins and containers is not the issue, but rather incidental trash that litters neighborhood lawns and parking lots of area businesses. Residents worry that excess amounts of trash give the community a bad look.

University Park resident, Amber Hill, 28, isn’t happy about the idea of picking up litter left behind by others.

“It’s annoying to have to clean up trash that isn’t mine to begin with,” Hill said. “I come home from work or running errands, and there is trash on the ground outside my house.”

Skinner said neighborhoods are monitored for trash on the properties outside garbage cans after collection day.

“Residents in violation of the ordinance are issued a verbal or written violation notice,” he said. “The third notice results in the inspector placing a $35 charge on the resident’s utility bill for providing a clean up service.”

When garbage cans are left out, excess debris is blown onto the ground, adding to the trash already there.

Study Edge, a tutoring service located at 1717 NW 1st Ave., sees heavy foot traffic especially during football season. The service is located within a five-minute walking distance from a tailgating parking lot on NW 2nd Avenue. Although trash is bound to be an issue in the area, director of operations at Study Edge, John Hutchinson, said picking up after people is time consuming.

“Anytime after the students go out, the trash is going to be bad,” Hutchinson said. “Fall is worse because people are tailgating, walking around and throwing trash outside the business.”

As part of their job descriptions, employees at Study Edge are required to clean up trash left behind by others before opening the next day.

Businesses aren’t receiving violations or warnings for excess amounts of trash outside the doors; however, whatever trash is left can deter potential customers.

According to Sushi Chao manager, Jessica Blohm, the business may look dirty to people driving or walking by.

“When we see the trash, we try to clean it up as fast as possible so it doesn’t affect the business,” Blohm said.

Over the past few years, Gainesville’s Solid Waste Division has promoted initiatives to reduce city litter, according to Skinner. The Solid Waste Division uses programs such as curbside pickup, recycling and the Adopt-A-Street program to help with littering. The program lists 57 members including UF sororities, fraternities and clubs with four adopted streets located in the College Park area at NW 5th Avenue, NW 7th Avenue, NW 8th Avenue and NW 2nd Street.

“Since the program requires members to commit to removing litter at least six times a year, the city is becoming cleaner,” Skinner said.

The University of Florida Gators football team hosts South Carolina this weekend. Midtown residents and businesses are certain to wake up to a sea of solo cups Sunday morning.

The Buchholz High School football team travels to Ft. Lauderdale to take on St. Thomas Aquinas for a berth in the state championship game.