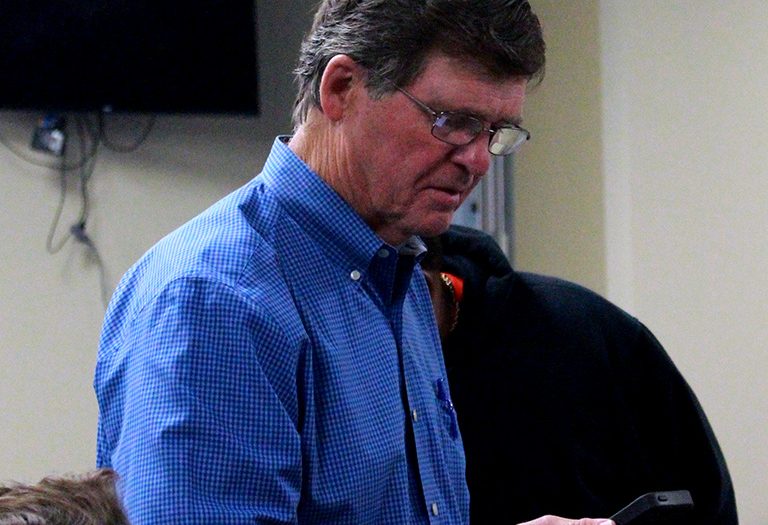 Gunnar Paulson, running for the Alachua County School Board, takes a look at the poll results coming in. (Nicole Needles/WUFT News)

After an indecisive primary race resulted in Tuesday’s run-off election, Gunnar Paulson can rest easy having retained his school board seat for another four years.

The Alachua County school board chairman successfully defended his District 3 seat with a 7-percent victory over challenger April Tisher. Paulson won with 54 percent of the vote, a smaller margin of victory than in 2014, when he defeated challenger Philoron A. Wright with 66.7 percent of the vote.

This was Paulson’s first re-election bid that resulted in a run-off election. In the August primary, neither Paulson (45 percent) nor Tisher (31 percent) secured the 51 percent needed for victory.

“I’ve never been in this position before, so it was something new, yeah,” Paulson said. “And I had to get a plan for it, and with my daughter as campaign manager, she did a tremendous job at keeping me on task, and so it was a new experience.”

Tisher, who conceded to Paulson late Tuesday night, said she was happy that she ran.

“You know, hopefully my opponent and other school board members have heard a lot of the things that have been discussed in our forums and ideas that have been put out there, and they can help to carry those things forward,” Tisher said.

Paulson said his first priority of his next term is to continue fighting for public education, followed by improvements in school safety.

“We’ve already implemented our safety plan, but we still have to harden – as they call – the schools and make them more than secure,” Paulson said.

“I say to my supporters: Thank you for sticking with me,” Paulson said.

Angel is a reporter with WUFT News and the Production Manager for GHQ – a top-40 radio station based out of the University of Florida. Angel can be reached at 813-810-6742 or by emailing angel.kennedy@ufl.edu.
@mrkennedya
Previous Voters Defeat GRU Referendum, Support $238M School Facilities Sales Tax
Next Nelson, Scott Race Headed For Recount