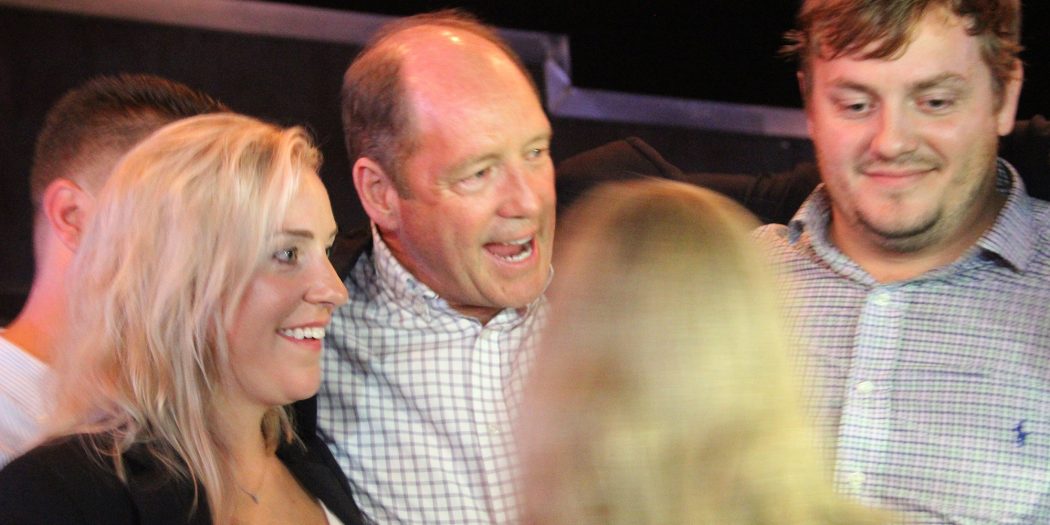 U.S. Rep. Ted Yoho and his family stand together as he receives official news that he will continue to represent Florida’s 3rd congressional district after winning the general election on Tuesday, Nov. 6. This will be his fourth and final term, he said. (Gaby Eseverri/WUFT News)

By Cassandra Alamilla and Alexandria Ng

Based on early returns, The Associated Press projected Yoho had won at 7:13p.m.

Yoho, 63, was widely expected to win his fourth term against Democratic candidate Yvonne Hayes Hinson, a retired former Gainesville city commission member. His seat was considered safe for Republicans during a midterm election when Democrats nationwide expressed cautious optimism they might take control in the House.

The early call surprised Yoho, whose campaign did not immediately accept news of his victory, and Hinson, who had not yet even left home to attend a Democratic watch party in downtown Gainesville when a WUFT reporter contacted her by phone to say she had already lost the race. Yoho’s campaign manager, Kat Cammack, said she had wanted to see vote tallies in each of the counties that comprise the congressional district.

“If indeed he wins, he ran a good race,” Hinson said in an interview. “He treated me with integrity and great respect.” Hinson said she was not planning to call Yoho to concede: “Absolutely not. Concede? Never.”

Yoho, who was first elected in 2012, defeated the Republican incumbent in that year’s primary by only 829 votes or 1.1 percent. He said then that he would spend no more than eight years in Washington, meaning he will not run again in 2020 unless he changed his mind.

Yoho, a large-animal veterinarian, outraised his opponent $818,589 to $53,815 through the middle of October, according to federal campaign finance records. Hinson’s own party considered the race effectively unwinnable: Hinson gave $6,311 to her own campaign, nearly twice as much as she received in support from national Democrats, records showed.

President Donald Trump was a vocal supporter for Yoho, who nearly always has voted in line with Trump’s policies. Trump endorsed Yoho during his primary campaign against Judson Sapp, which Yoho won by more than 50 percentage points. Trump said Yoho was “tough on crime and borders” and “was really helpful on tax cuts.” Yoho has also been endorsed by the National Rifle Association Political Victory Fund for his support of the Second Amendment, although he supports more thorough background checks for people purchasing guns and more attention to mental health to prevent more gun violence.

Florida’s third congressional district extends south to Ocala and north nearly to Jacksonville. It was redrawn in 2012 to make it mostly white, covering mostly rural areas and small towns, with a total population of about 732,000 people. The only cities of any significant size are Gainesville and Ocala.

Yoho has said he is open to exploring changes in Social Security to allow trustees to invest in private securities and allow younger taxpayers to invest some of their Social Security taxes in private accounts. He supports repealing the Affordable HealthCare Act and supports Heath Savings Accounts that he said allow citizens to determine how their health dollars are spent.

Yoho was re-elected in 2014 with 65 percent and again in 2016 with 56 percent of the vote, according to the Federal Elections Commission.

Before his election to Congress, Yoho was a veterinarian for 30 years. He graduated from the University of Florida with his bachelor’s and doctorate in veterinary medicine. Yoho and his wife, Carolyn, have been married 43 years and have three children. He said he ran in 2012 without any prior political experience because of the passing of the Affordable HealthCare Act in 2009.

Cassandra Alamilla is a reporter for WUFT news. She can be reached at (786) 214-0237 or cassandraalamilla@gmail.com. Follow her on Twitter: @cassie_alamilla.
@cassie_alamilla
Previous Evening News in 90: Nov. 6,2018
Next Some Gainesville Voters Receive Incorrect County Ballots