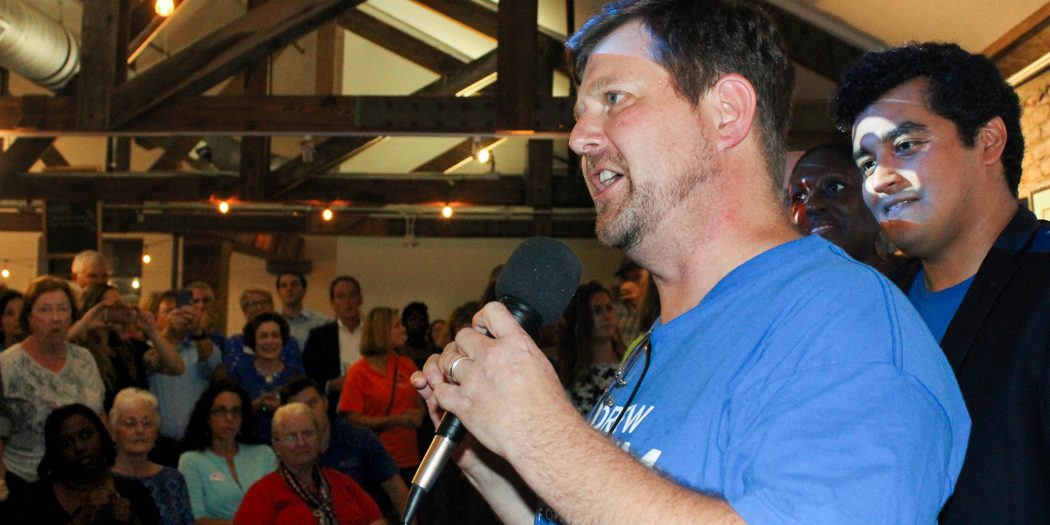 Gainesville Mayor Lauren Poe celebrates the passing of the elections referendum at the Democratic joint Victory Party held at Cypress and Grove Brewery in Gainesville, Florida, on Nov. 6, 2018. The referendum will move city of Gainesville Elections to the fall. (Marcelo Rondon/WUFT News)

In one of four local ballot measures Tuesday, the proposed change in governance over Gainesville Regional Utilities went down to defeat by a margin of approximately 60 percent to 40 percent.

If the referendum had passed, the Commission would have faced uncharted territory appointing an independent oversight board.

“It’s a vote of confidence in our system of government,” said Gainesville City Commissioner Harvey Ward. “It’s a victory for home rule.”

In the other city measure on the ballot, voters approved a change in term limits for the city commission and mayor.

The election year and term limit referendum will change the years the city commission elections are held to coincide with statewide elections held every other even-numbered year. The change will begin with the regular election in 2022.

In the two county-wide measures on the ballot:

Of the four measures, the vote on the control of utilities brought some of the strongest reaction Tuesday night.

“It’s an overwhelming statement from our city’s residents that they want to keep control over their own utility and elect the people who run it,” Gainesville Mayor Lauren Poe said.

Mayor Poe said the city commission will continue to work to find ways to lower utility rates, citing the 14% decrease in Gainesville utility rates over the past three years.

Although Rep. Chuck Clemons, R-Newberry, sponsored the GRU referendum bill in the state House of Representatives, he said he supports Gainesville voters’ decision to retain the current oversight of GRU.

“I guess the status quo is what the city of Gainesville residents have voted (for), and they’re going to get the same kind of representation they voted for,” Clemons said.

As for the changes in election years for the city commission, Ward said they should improve voter turnout in city elections and should save costs for the cities in sharing the cost to hold elections with the state and county.

“The greatest benefit is that we’ll have at least twice as many people participating in our city elections,” Ward said.

“I think it shows how important kids in our community are and making sure they have a good learning environment,” Cornell said.

The approved tax increase will provide about $22 million per year for the next 12 years. The tax will be implemented starting Jan. 1.

“We’re able to spend money we haven’t had in the past,” Alachua County School Board Member Tina Certain said. “The goal is to spend those funds equitably across the county.”

The Alachua County School Board will work to approve an allocation plan in the near future, Certain said.