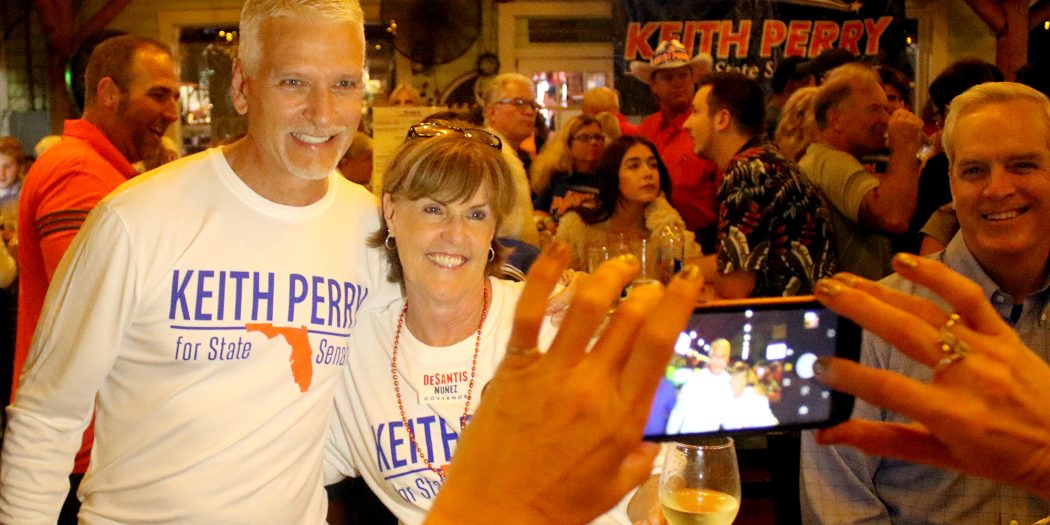 Keith Perry Holds On In Tight Race For District 8

Enneking conceded while surrounded by Democratic supporters at Cypress and Grove Brewery in Gainesville.

“It’s our job to continue to push our elected officials to serve the community. We need to help them be their best selves in our best interest.” @KayserEnneking gives her concession speech at @cypressandgrove. #ElectionNight #Vote2018 @WUFTNews pic.twitter.com/3F3G4dJsun

Perry acknowledged Enneking’s strong campaign after she conceded the race.

Perry, 59, has served as the District 8 senator since 2016 and previously served in the Florida House of Representatives for six years. Perry won the then-empty senate seat in 2016 with the majority, 6 percent ahead of Democrat Rod Smith. A Republican had retained the seat for the two elections prior to Florida judges redistricting senate and congressional districts in Dec. 2015.

Today, Senate District 8 includes all of Alachua and Putnam counties and northern Marion County, including Ocala and Gainesville.

Though born in Tallahassee, Perry attended F.W. Buchholz High and his parents worked as a University of Florida psychology professor and UF nurse. He began his roofing business, Perry Roofing Contractors, in Gainesville in 1976.

Perry has been married for 22 years and has two daughters. Outside of his roofing business, Perry created House of Hope to mentor, house and rehabilitate former inmates.

Perry has been a public critic of the Gainesville City Commission’s relation with GRU throughout his time in Florida politics. He has suggested the separation of the two entities during his campaign and time in spent in office, despite hold back from city officials, because of continuing rises in electricity rates.

He said GRU is focusing on retaining its power rather than fighting for its Gainesville customers.

“That’s not what government should be doing,” Perry said. “What we need to do is understand the fundamental foundation of why these things are costing so much more for working class people.”

Campaign donations to Perry have totaled more than $1.5 million, an increase from the $1.1 million he raised in 2016. The Florida Republican Senatorial Campaign Committee was the largest donor for Perry.

This was Enneking’s first run for public office. Enneking, an anesthesiologist at UF Health, is a Gainesville native who attended Gainesville High School earned her doctorate from UF. Her goals as state senator included increased health care and increased pay for teachers.

Though a registered Democrat, Goston ran as a non-party affiliate candidate. He previously served as a Gainesville city commissioner from 2015 after defeating current US Representative Democratic candidate Yvonne Hayes Hinson. He lost re-election in May and then decided to run for state senate.

In the final week of pre-election news, Goston raised attention when filing a complaint against his Democratic competitor, claiming she used her University of Florida resources to conduct political affairs.

Taylor Girtman is a reporter for WUFT News. She can be contacted at news@wuft.org or by calling 352-392-6397.
Previous Alachua County Commission District 2 Election: Marihelen Wheeler Beats Two Opponents
Next Voters Line Up Behind Constitutional Amendments