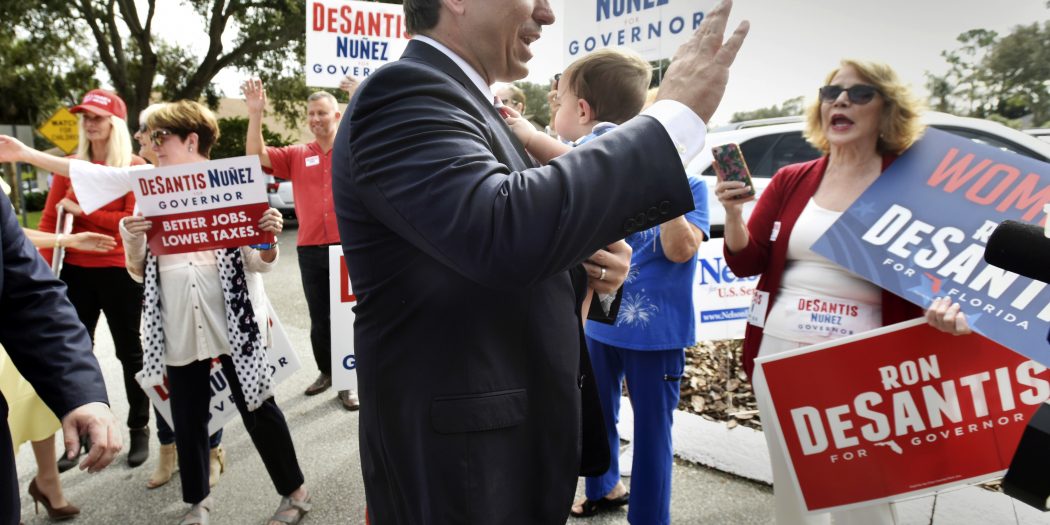 Gubernatorial candidate Ron DeSantis greets supporters with his son Mason after voting on Election Day, Tuesday, Nov. 6, 2018, at Our Lady of the Sea Church in Ponte Vedra Beach, Fla. (Will Dickey/The Florida Times-Union via AP)

Republican Ron DeSantis narrowly defeated Andrew Gillum on Tuesday to become Florida’s next governor in a wild election that saw the highest voter turnout in a generation. The outcome cemented a long-standing Republican lock on the governor’s mansion and dashed Democrats’ hopes of electing the state’s first black chief executive.

President Donald Trump had supported DeSantis. A former congressman, DeSantis, 40, was a founding member of the Freedom Caucus, a group of the most conservative lawmakers in the House. During the campaign, DeSantis focused mostly on national policy issues that mirrored Trump’s concerns, such as illegal immigration.

One of the most memorable moments in the campaign came when DeSantis maintained he was not using racist language when he said he didn’t want voters to “monkey this up” by electing Gillum.

DeSantis was leading by 1 percentage point, with 99 percent of votes counted. Under Florida law, no recount was possible until the margin is equal or less than one-half percent.

Gillum conceded the race just before 11 p.m. “We spoke truth to power,” he said. “I want to encourage you not to give up.”

Democrats nationwide had pinned their hopes on Gillum’s victory as a barometer of the country’s discomfort with Trump and Republican policies. Florida had not elected a Democrat as governor since 1994.

Gillum, who led narrowly in pre-election polls, was a self-described progressive who supports greater gun control, higher corporate taxes and expanding the U.S.-run Medicare health insurance program to cover everyone, rather than just Americans 65 and over.

Gillum’s campaign was challenged by Democrats’ traditional past difficulties in midterm and gubernatorial elections, and by a corruption scandal that had erupted in Tallahassee City Hall when Gillum was mayor. Gillum said that he was not the subject of the FBI’s investigation of the alleged corruption. News about the case featured prominently in DeSantis’ political advertisements calling Gillum “corrupt.”

Gillum fired back that DeSantis was racist. DeSantis has appeared in past speaking engagements as far-right conferences and declined to refund campaign contributions from a donor who called Obama a racist slur on Twitter.

Late in the campaign, newly released text messages showed that Gillum had received tickets from an undercover FBI agent – who with others posed as developers seeking to conduct business with the city – to see the Broadway show “Hamilton” in 2016. Gillum had said he thought the tickets were bought by his brother, but the texts appeared to show that Gillum accepted the tickets knowing their origin and never reported them as gifts, as required by Florida law.

Related records also indicated that a lobbyist friend provided a hotel room in New York for Gillum and his brother – and possibly paid for much of Costa Rican vacation for the mayor. The lobbyist, Adam Corey, is a central figure in the FBI investigation.

Gov. Rick Scott will continue to live in the governor’s mansion until the end of his second term, on Jan. 9, 2019. Scott could not run for re-election as he has already served two consecutive terms, the limit in Florida.

Matthew is a reporter for WUFT News and Fresh Take Florida who can be reached by calling 786-332-8003 or emailing marrojas@ufl.edu.
Previous Voters Line Up Behind Constitutional Amendments
Next Florida State House District 21: Chuck Clemons Earns Second Term