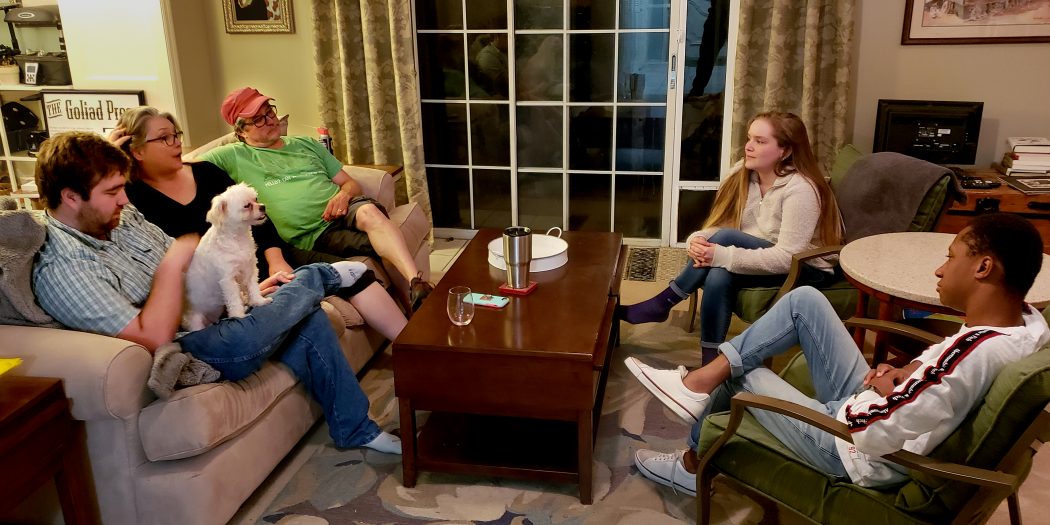 Stetson Cooper sits on the back porch of his parents’ Ocala home, enjoying one of the first cool, crisp evenings of fall. After spending most of his weekend reading and getting caught up with his online college courses, the 24-year-old democratic socialist joins his family in political banter while enjoying hot, fresh slices of Blue Highway Pizza.

He discusses a variety of political topics with his family, from Rick Scott’s faults as Florida’s governor to Jair Bolsonaro’s victory in Brazil’s presidential election. He takes solace in being able to freely express his political beliefs with his blue clan deep within Ocala’s red territory.

Stetson isn’t shy to publicly identify himself as a democratic socialist, despite the negative reactions it often stirs in his conservative neighbors.

Stetson voted for Democratic primary candidate Andrew Gillum for governor and supports the Tallahassee mayor in Tuesday’s General Election even though Gillum doesn’t identify as a democratic socialist.

“There are a lot of things with his platform that I agree with,” Stetson says. “I think it’s the most robust platform of any of the candidates.”

He most agrees with Gillum’s intentions to raise the minimum wage to $15 per hour and to create a “Medicare-for-all” single-payer health system.

Stetson is a firm believer that the government should fund social programs to help meet public needs, even if it means creating a state income tax to fund these projects.

Stetson’s parents, Sandra and Ron, don’t identify as democratic socialists, but they intend to vote similarly across the ballot. His parents are particularly invested in the U.S. Senate race.

Stetson’s younger sister Grace was diagnosed with type one diabetes at age 11. The Coopers say they were forced into a more expensive healthcare plan when Scott and the Florida House didn’t expand Medicaid coverage in 2015.

Prior to this, Sandra says it cost $105 monthly to provide health insurance for her daughter. Currently it costs approximately $591 per month for Grace’s healthcare coverage and more than $1,000 monthly for all three of her children combined.

These costs do not include the medical equipment and prescriptions needed to monitor Grace’s diabetes daily. Sandra said her daughter’s prescriptions increased five times their original amount after switching providers.

“There are people (in Florida) who live in poverty,” Ron says. “I just can’t imagine how they can afford these types of things.”

Stetson hopes that victories by Gillum and Nelson and the passing of Amendment 4, which would restore voting rights to non-violent felons who served their full sentence including parole, will spark change in Florida’s political environment.

Like other notable democratic socialists such as Bernie Sanders, Stetson recognizes prison overcrowding and the need for judicial system reformation.

To raise awareness, Stetson volunteers at events such as the Democratic Socialists of America’s brake light clinic. Volunteers will fix broken tail lights in Gainesville Dec. 1 for free. The goal is to help reduce targeting of minority drivers by law enforcement.

While he remains optimistic about this year’s mid-term election, Stetson is aware that it takes more than just hope to spark change. He is determined to make his political beliefs heard in the heart of this red region, whether it’s through voting at his local precinct on Tuesday or volunteering at the brake light clinic.

“I’m incredibly proud of him (for) taking a political stance,” Sandra says.

Sean is a reporter for WUFT News who may be contacted by calling 352-392-6397 or emailing news @wuft.org
Previous The Transgender Man: Kane Barr Votes For the Voiceless
Next Nov. 5, 2018: Evening News In 90