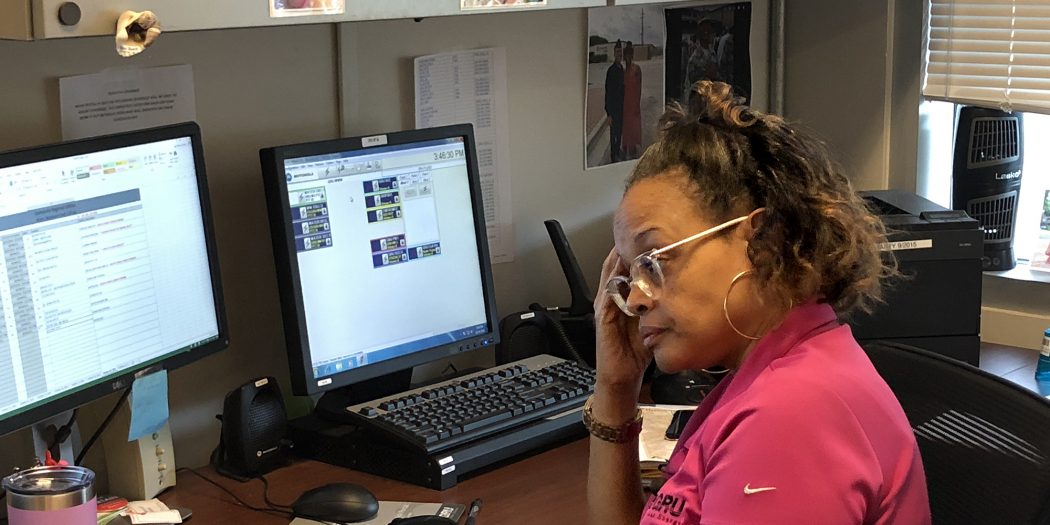 Crystal Monroe works as an operations assistant for Gainesville Region Utility and recognizes the importance of voting as a way to exercise your voice. (Lauren Reynolds/WUFT)

Small Town, Big Family: Crystal Smith’s America Is ‘Based On Everybody’

By Amanda Roland and Lauren Reynolds

Crystal Smith’s childhood in Hawthorne was centered around her family, with 14 aunts and uncles living on the rural land given to them by her grandparents. Her parents had four beautiful children, “me being the prettiest,” Crystal says.

Crystal, an operations assistant at Gainesville Regional Utilities (GRU), will vote Tuesday with her big family upbringing in mind.

She prefers to not label herself as a Republican or Democrat, but instead identifies as being “about prosperity and moving forward.” She stresses the idea of looking at America as a whole, not as individuals.

“The United States is made up of all different types of genders, ethnicities, and that’s what America is,” she says. “It’s not black or white. It’s not just based on you and me, it’s based on everybody.”

Growing up, Crystal’s parents never spoke to her about politics or the importance of voting. When Crystal turned 18, she decided not to vote.

“Mom and dad never thought of anything as political, it was all about family,” she says.

Now a mother of six children, Crystal carries those ideals into her own family life, especially with her youngest son, a 14-year-old currently attending Eastside High School. He is her only child still attending school.

Crystal became more concerned about politics to set a good example for her children and make sure she is making smart choices that benefit her family as a whole.

She says some of her children actively vote and she encourages them to take advantage of the opportunity so they don’t miss out on an America that is best for them. She reminds her daughters that being female and a minority will work against them.

“I said, ‘Whatever you believe in, whatever benefits you, that’s what you vote for,'” she says.

While Crystal doesn’t talk politics at work, she has a great relationship with a lot of her colleagues. She enjoys showing off her big family with collages of family photos on the walls of her office.

Crystal is a life-line at GRU. Everything goes through her, says Elijah Gainey, a supervisor for wastewater collection at GRU. He says Crystal deals with a lot of vendors and supplies and therefore knows about everything that goes on in the area.

Elijah and Crystal have been working together for 24 years, and their working relationship has grown into a friendship – a common theme between Crystal and her co-workers.

“She’s this person that always has a really good feel about her, and she makes you want to be around her,” Elijah says.

Crystal is ready for the upcoming midterm election, and wants to look more into the amendments. She says she’s in favor of Amendment 4, which would restore voting rights to more than 1.5 million non-violent felons in Florida who have served their sentences and parole.

She calls former President Barack Obama her political role model. She admires his time in office because he stood up for things he believed in and brought character. When looking at government and politics now, she sees it as very strange. She hopes that the government will change, but she knows there are people who will always stay the same.

“People are going to be themselves,” Crystal says. “People are the way that they are because of the way they were taught.”