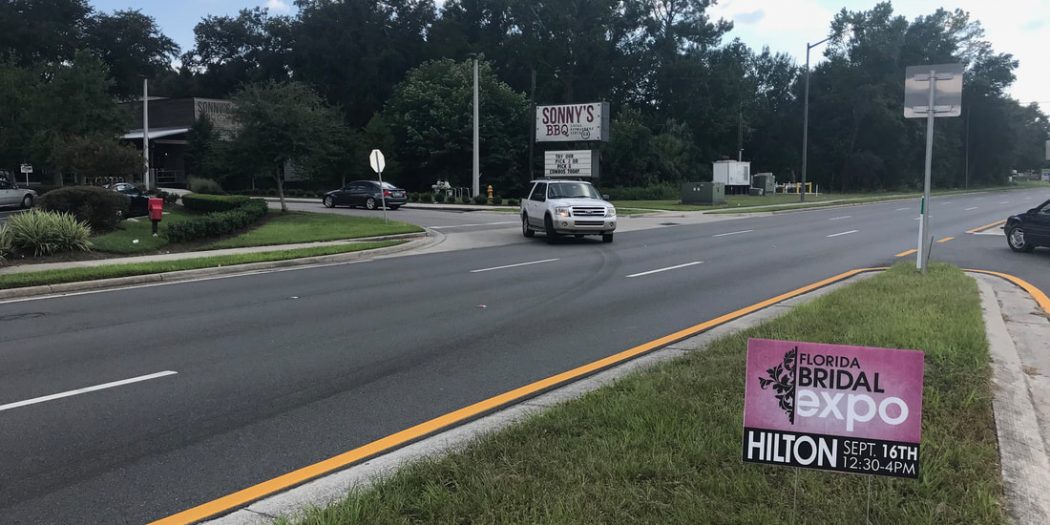 Someone working on behalf of Florida Bridal Expo placed a yard sign in the median on Archer Road. The new ordinance allows citizens to remove signs like this one from public property. (Marianna Faiello/WUFT News)

Signs in colors ranging from the patriotic red, white and blue to eye-catching yellows, oranges, greens and more.

You can’t avoid seeing them this time of year, especially with an election on Tuesday.

For motorists, these political or commercial signs can be a distraction.

“You pass by,” Kim Barton, Alachua County supervisor of elections, said, “and you see some overkill of signs.”

While it’s permitted for signs to be placed anywhere on private property, the public’s land cannot be used for advertising purposes, political or otherwise. And this includes rights-of-ways — areas of publicly-owned land maintained in and around public streets.

A county code prohibited citizens from removing signs illegally placed in rights-of-way because it was state property. The responsibility of removal was left to public work crews — until recently.

Right-of-way sign placement became the focus at a recent board of county commissioners’ meeting. By the time the meeting was over, changes were made to an ordinance that limited the removal of signs.

The changes are now in effect.

Now it’s legal for regular citizens to remove right-of-way signs and destroy them.

The board of commissioners also changed the code to define illegally placed signs as abandoned property and trash so that public work crews can throw them away. Before, crews had to bring such signs back to a holding facility.

Byerly worked with Corbin Hanson, a county attorney, to change the ordinance’s wording so that anyone can remove signs that are placed illegally — meaning placement that doesn’t meet the city, county or state standards set by the Transportation Department.

Campaigners are allowed to come out to the depot to pick up these signs, Byerly said, but very few do pick them up.

Byerly said he approached Hanson with concerns that had been brought to his attention multiple times over the years by local residents. Hanson told him citizens should be able to remove “trash” from the right-of-way, but the code’s language hadn’t been touched in years.

Byerly elaborated that not only do the illegally placed signs sometimes keep motorists from seeing oncoming traffic, but they also create an issue for crews that waste time removing the signs before being able to mow the area.

There is no law or code that limits the number of signs a political candidate or commercial retailer can place as long as they are not placed on state property.
Barton, the county supervisor of elections, said throughout October’s early voting period, she heard complaints about an area outside the Millhopper Branch Library where signs were blocking motorists from seeing oncoming traffic so bad that drivers could not make left-handed turns.

When local candidates sign-up to run for office, Barton said, they are given paperwork instructing them on the codes enforced when it comes to signage placement.

Still, not all candidates obey regulations and take the chance of officials removing them from the right-of-way and public areas.

“It’s very ironic to me, depressing really, that people who want to be elected as lawmakers are willing to ignore or trample on the local laws in order to get into office,” Byerly said.

While creating an array of other issues, leftover election or commercial signs can have a serious environmental impact.

Adrian Hayes-Santos, the District 4 Gainesville City Commissioner, said elections create a lot of waste — anything from signs to pamphlets and mailers.

The commissioner added that when he runs for reelection, he plans to reuse his signs from March 2016 when he first won office. The best way to keep Alachua County clean, he said, is for candidates to take ownership of their signs distributed during election season — reusing them again if possible.

“Unfortunately,” Hayes-Santos said, “there aren’t really any other alternatives to get the information to voters.”

Marianna is a reporter for WUFT News who can be reached by calling 352-392-6397 or emailing news@wuft.org.
Previous In Wake Of Pittsburgh Synagogue Shootings, UF Student Cherishes Her Faith Journey
Next The Conservative Immigrant: MiYong Fitzpatrick Has Her Small Business In Mind