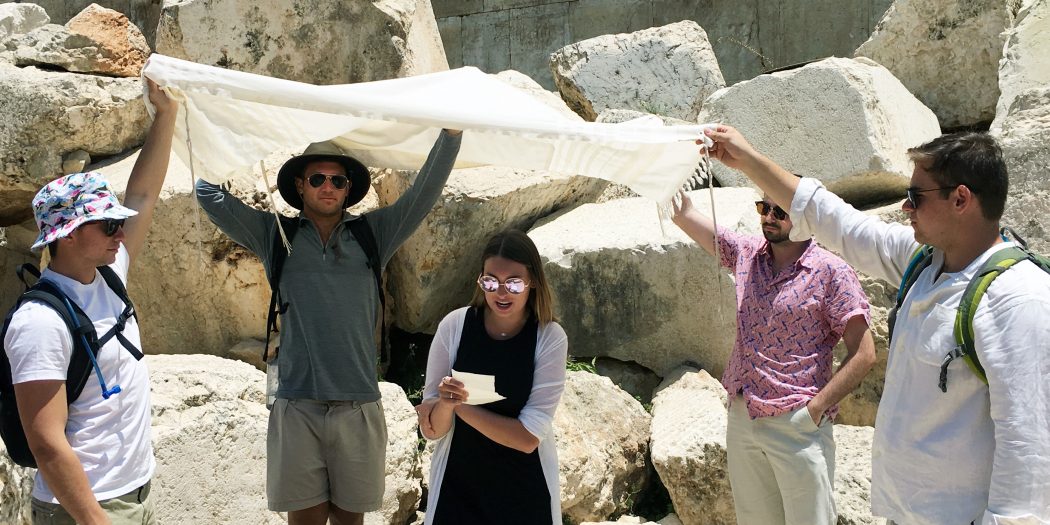 UF student ended her trip to Israel with a Bat Mitzvah, or coming of age ceremony, in Jerusalem. (Photo by Arielle Gelman)

I grew up in a large suburb of St. Louis, Missouri, where my family was one of three Jewish households in the area. We are Reform Jews. At most, we attended temple five times a year, only when we had to. We celebrated Christmas because we liked Santa and tinseled trees. And we dreaded going to my grandparents’ house for Passover meals.

The extent to what I knew about anti-Semitism was from history books and Anne Frank’s Diary. I identified as Jewish as a kid because it was the only thing that made me different than my peers.

My mother, the most liberal of Reform Jews, decided a long time ago that she would never force a religion on me as her parents had done. My father considers himself Buddhist and my step-dad grew up in a Methodist church. Religion was a choice in my household and I never chose it.

I arrived at the University of Florida in the fall of 2015 and suddenly found myself surrounded by Jewish students. UF has 9,400 Jewish students, the largest of any campus in America. They helped me set out on a journey of faith.

I never intended to find religion in college, but I did.

This past weekend, I have thought a lot about this journey. After the tragedy in Pittsburgh at the Tree of Life Synagogue, I have reflected on my experiences, or lack thereof, with anti-semitism. It is something that is now so deeply personal to me and yet, it wasn’t just a few years ago.

I was home in Orlando with my family when the news broke. My mother and I were both in shock and shared the same feelings.

“The question lately hasn’t been if a synagogue will be shot up, the question has been when will it happen,” my mother said.

This heinous crime has affected not only the families of the slain, but the Jewish community has a whole. I felt the same sadness that overcomes me every time there is a mass shooting in America. Only this time, it felt more personal. When I first arrived in Gainesville, I had little knowledge of Judaism. I knew the culture, meals and holidays, but I never really knew the basic tenets of the faith.

I had no clue what Hillel or Chabad was. I had never even met an Orthodox Jew. On campus, I was suddenly bombarded with Jewish student traditions I had never heard of, like summer sleep-away camps and youth groups at temple. It felt like every Jew at this 53,000-student university knew each other and I was the odd one out.

Then, in the summer of 2017, I went to Israel on Birthright, a free trip for young Jewish adults to travel to the holy land to learn more about their heritage. I had no expectations of the trip except to sightsee and perhaps make a few new friends who shared a common heritage.

I ended up having a bat mitzvah at the Western Wall during my last few days in Jerusalem. I never planned on having this coming-of-age ceremony; my Jewish mother had never even mentioned it. I felt I finally understood my religion. It was accepting of others, encouraged curiosity and challenged me.

I never intended to find Judaism in college. It was not something I felt was missing from my life, until Israel. A small piece of me was fulfilled by knowing this worldwide community was standing behind me.

It’s common for young people to say they’ve found Jesus, Christianity or really any faith. But, it’s different for Jewish kids. Judaism is not something we can find because we are so ingrained in a community our entire lives. In my not-so-unique journey of finding faith, it took traveling to the holiest sites of the Jews to fully understand my identity and what it means to be a “chosen one.”

I now attend temple at school and at home as often as I can. I went to my first Rosh Hashanah services ever this year. At 22, I have found refuge, hope and meaning that makes me a happier college student.

Jews have once again shown the world their strength and resilience after the shooting at the Tree of Life. Jewish students at UF have come together to support one another during this difficult time. I am lucky to have been welcomed with open arms into this community and encouraged to ask questions.

I know I still have a lot to learn but I have my faith now to guide me.

Lexie is a reporter for WUFT News and can be contacted at 314-307-9417 and through email at alexissmiller@ufl.edu. Her Twitter handle is @lexiemiller913.
@@lexiemiller913
Previous Single Father: Strong Economy, Jobs Key For Teacher Michael Zuaro
Next New Alachua County Ordinance Gives Citizens Right To Throw Away Signs Left On Public Property