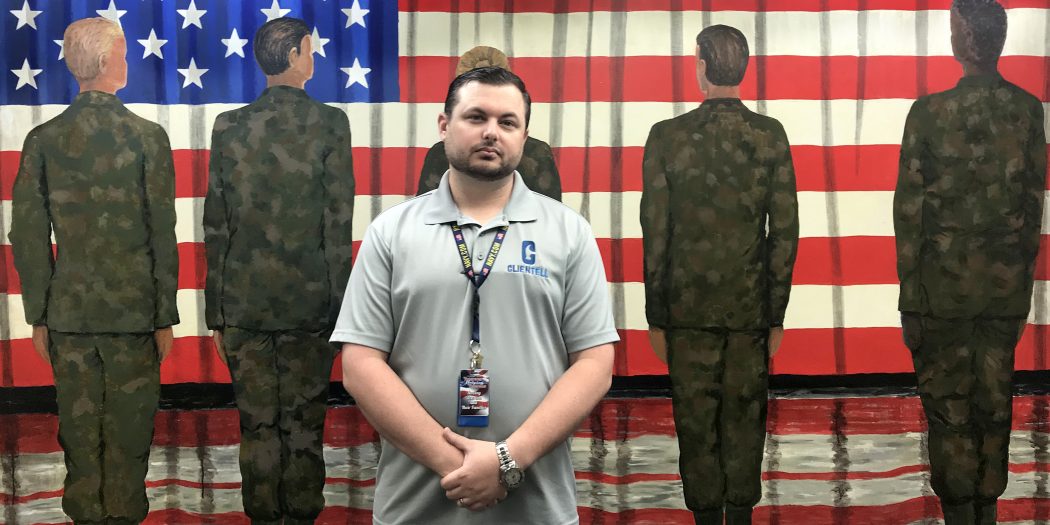 Chad Walker recalled an old photograph when he considered joining the armed services. His grandmother kept a picture of her father, donning the Navy dress whites, on her dresser.

“I remember seeing it my whole life,” Chad says.

Chad attempted to convince his brother, Sean Walker, to join the military after Sean scored an 80 percent on the Armed Services Vocational Aptitude Battery (ASVAB) test. Sean turned the question around after a heated argument: “If it’s so great, why don’t you do it?”

The two decided to join if the other would as well.

Chad, then 20 years old, walked into a Lakeland recruiting office and immediately made his way to the Navy office. He approached a Naval electrician and said, “I’m gonna join the Navy today.”

Chad, now 38, lives in Ocala with his wife and three children. He splits his time between working on his new tech startup — an app called Clientell — and volunteering at Veterans Helping Veterans, an organization that helps service members with social services, employment, education and other needs.

Veterans’ issues will be a key consideration when he casts his ballot in Tuesday’s midterm elections. The impact of taxes and overregulation on Florida’s economy is another concern for the Bartow native.  He also looks for candidates who are willing to compromise on hot-button issues.

“When I sit down with someone, they see a veteran,” Chad says. “A white male. Business owner. People assume they know every political leaning this guy has.”

Chad spent eight years in the Navy — his first two in electronics education and training.

“If it has electricity and moving parts, I can tear it apart and put it back together,”  Chad says.

Fixing, maintaining and firing weapons systems became his trade for various deployments on two destroyers. His assignments included anti-piracy efforts around the Horn of Africa, joint drug task force work seizing large shipments of Colombian cocaine in the Gulf of Mexico and training other ships on anti-terrorism tactics.

Chad sustained multiple injuries in 2006  when a ship he boarded off the coast of Somalia was struck by a rocket-propelled grenade launcher. During his time serving, he sustained two separate spinal injuries in his neck, another to his lower back and a traumatic brain injury that caused intracranial hypertension.

Chad won a custody battle for his three children in 2008, which was a determining factor in his choice to leave the Navy and head back to Florida. He worked various jobs in the interim, including a stint as a ride and show technician at Walt Disney World.

Chad intends to vote for U.S. Rep. Ron DeSantis in Florida’s governor race. His first choice, however, was  Florida Commissioner of Agriculture Adam Putnam. Putnam, also from Bartow, represented everything Walker liked in a Florida politician: roots in the heart of Florida, an understanding of the importance of agriculture and a life dedicated to public service.

“I care about the things that built this state up, and it’s not just Disney World,” Chad says. “It’s built on the back of agriculture.”

His vote for DeSantis is based purely on the policies at stake. Chad has no particular affection for DeSantis as a person. He thinks many of DeSantis’ early ads gave a macho impression of his own Navy tenure, in which he served as a lawyer for special operations forces.

“He turned off a lot of guys with his early stuff that basically painted him as a SEAL,” Chad says. “He was a lawyer for a SEAL team. That turned a lot of veterans off, me included.”

Chad was surprised by Tallahassee Mayor Andrew Gillum’s victory in the Democratic gubernatorial primary. But Chad found Gillum’s tax plan, along with question marks about cozy relationships with lobbyists, to be insurmountable.

“He’s a very young, charismatic speaker,” Chad says. “You can’t take that away from him. But it’s about the policies.”

Chad began volunteering for Veterans Helping Veterans in June of last year. He has seen the affects of mental health problems on veterans first hand, both during his time in the Navy and while volunteering in Ocala. To him, this issue  is grossly overlooked.

This is why he intends to vote for Governor Rick Scott over Democratic incumbent Bill Nelson in Florida’s heated Senate race. Chad believes that Nelson, a veteran himself, hasn’t done nearly enough on veterans’ issues in Washington.

No voter likes being labeled and put into a box. This practice, Chad believes, is polarizing the nation’s politics.

Anthony Nicotera is a reporter for WUFT News and can be reached at 352-392-6397 or anicotera1@gmail.com.
Previous Nov. 1, 2018: Afternoon News In 90
Next Five Alachua County Precinct Changes In Effect For 2018 Midterm Election